I’ve always been flabbergasted by America’s undying reliance on the car. Unless you’re in a city like Chicago or New York which has a heavily ingrained public transport system, if you tell someone you’re getting from point A to point B without a car, they look at you with confusion. The concept just seems so foreign to so many. But the reality is, as someone who has never had a license to drive in the United States, there is always away to get from point A to point B without the car – well, most of the time.

Between Uber, public buses, trains, shuttle services and in some cases water transport, we’ve never had more options to get around without renting a car. But sometimes you just need to know where to look, because many locals don’t even seem to know how to navigate a carless adventure. After all, this was the country that perfected highway transport and, in spite of leading the way in public transport offerings into the early 1900s, let car manufacturers push them off the road – in some cases quite literally.

So on my recent travels to Arizona, it became something of an exercise of perseverance to make my way around the State without a car. And while some destinations may have ultimately proven out of bounds due to the expense of travel or time constraints – for the most part I was able to get where I needed to go, even if that meant (gasp!) occasionally walking a few blocks. 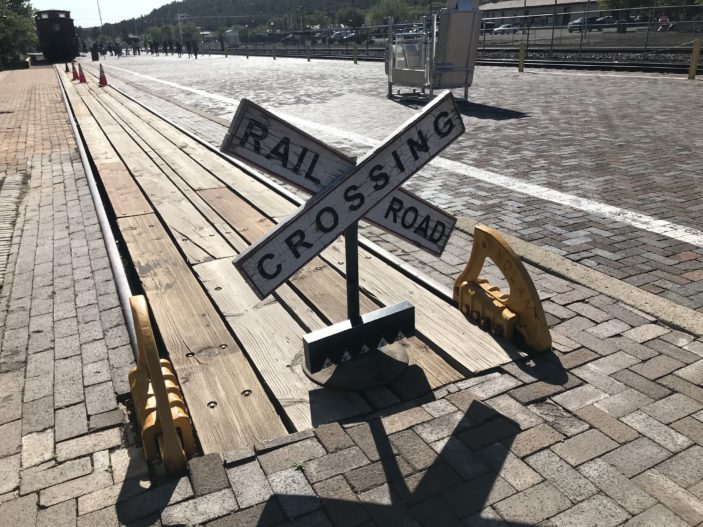 In a major city like Phoenix, the capital of Arizona, you’re not going to struggle to find transport options. Here, there’s Uber, Lyft and other rideshare services available, alongside public transit, with light rail and buses under the umbrella of “Valley Metro”. There’s also a driverless Sky Train that will take you to the airport. You can read more about all their public transport options HERE.

Uber and Lyft truly have revolutionalised getting around America, and you’ll be surprised how many cities in the country have been activated by the services, that once may have only had a few taxis to service the entire region. Flagstaff – located north of Phoenix, towards the Grand Canyon and accessible by the Pulliam Airport (I flew in from Los Angeles with American Airlines) – is one such city. With a population of around 70,000, the city definitely punches above its weight, serving as the home to great music festivals, as well as the observatory where they discovered Pluto and trained all the astronauts who went to the Moon.

The city has an Amtrak train station which sits on Route 66, that my hotel (the DoubleTree by Hilton) was kindly able to shuttle me to. And from there you could jump on a train to a number of destinations, or get picked up by one of the bus or transportation services in the city. I used Groome Transportation from Flagstaff, to get to the city of Williams, which is about a 40 minute drive. The service runs their shuttles at set times each day, as do FlixBus. Groome also travel regularly direct to the Grand Canyon, Phoenix and other destinations in the state. So that’s your first option for the Canyon right there. But I have a better route in mind for you…

On the drive from Flagstaff to Williams, it’s hard to believe you’re so close to the Grand Canyon. The massive trees, and snow on the mountains in the distance – even in early June – makes this feel as much like North West USA as anywhere else. It’s green, vibrant and beautiful. Williams is a much smaller city than Flagstaff, with only a few thousand residents. Here you won’t find Uber, but you don’t need it – everything is walkable. And as the gateway to the Grand Canyon, it’s here that you can board the Grand Canyon Railway (pictured in this article’s headline image), with incredible views as the topography changes from flat, arid land, to the majesty of the Grand Canyon. And you’ll get to enjoy a drink and a song or two along the way. 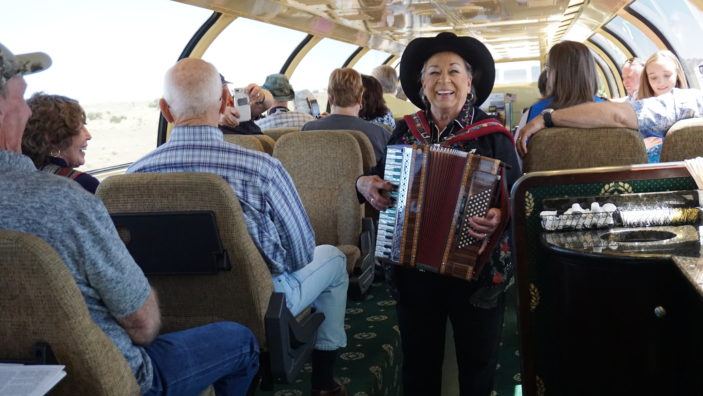 Riding the Grand Canyon Railway is a truly one-of-a-king experience, steeped in history (it’s been taking passengers since 1901) and beaming with fun for the whole family. There’s even a “shoot-out” at the Grand Canyon Railway Hotel before you board – as well as a few surprises along the way home. Trips to and from the Canyon are timed so you can do for the afternoon, or spend a night in the accommodating on the famed Southern Rim. Even if you had a car, you’d be crazy not to jump on board for the experience. There’s no better way to get to that part of the world. 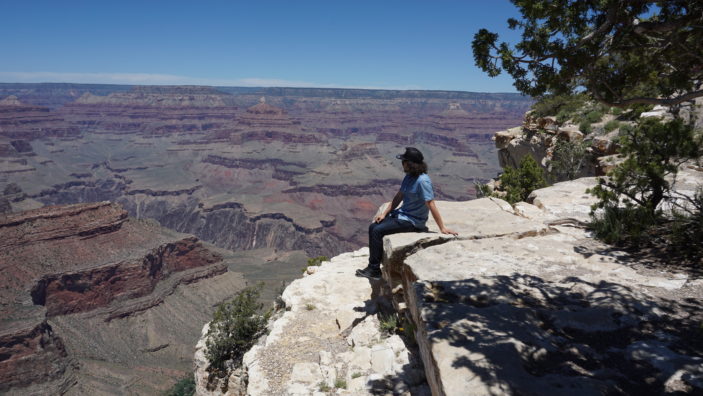 And it’s not the only scenic train experience you’ll find in the state. The heritage Verde Canyon Railroad is another “must try” experience in the state, though it’s a little trickier to get to. Located in Clarkdale, about ten minutes outside of Cottonwood, you’ll first need to get the FlixBus or Groome Transportation back to Flagstaff from Williams, and then either take the same bus to Sedona (if with FlixBus) or change to a new service (if with Groome).

This 45 minute or so drive from Flagstaff to Sedona is astonishing; at times it’s like being in the French Alps. You travel down down down through winding roads, the mountains and the trees – thriving with a green density that could have meant you were anywhere in the world. But then suddenly it gives way to giant red rocks and a terrain unlike anything you’ve ever seen. 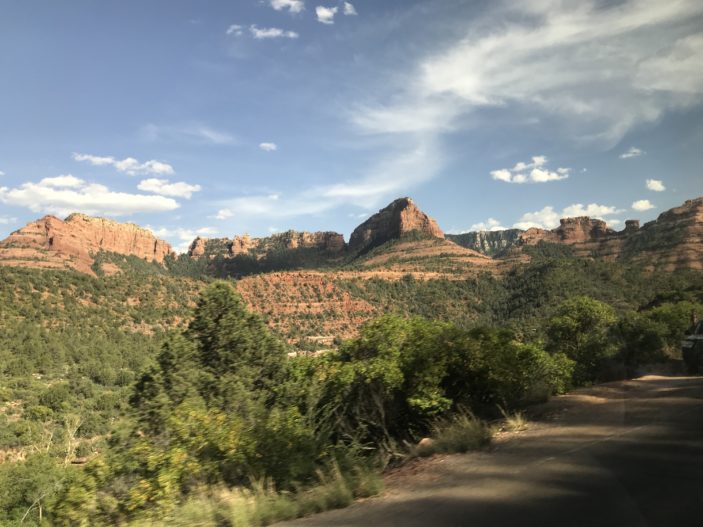 From Sedona, you can get an Uber or jump on the Verde Lynx bus service to Cottonwood, which takes about half an hour. Cottonwood is a great town to spend a night or two in, as you get to enjoy some incredible food and drink from the region, with quaint accommodation to enjoy – like The Tavern Hotel in Old Town. Fans of Tool will be pleased to hear that Maynard James Keenan’s restaurant, Merkin Vineyards Osteria & Tasting Room, is just around the corner from the hotel. 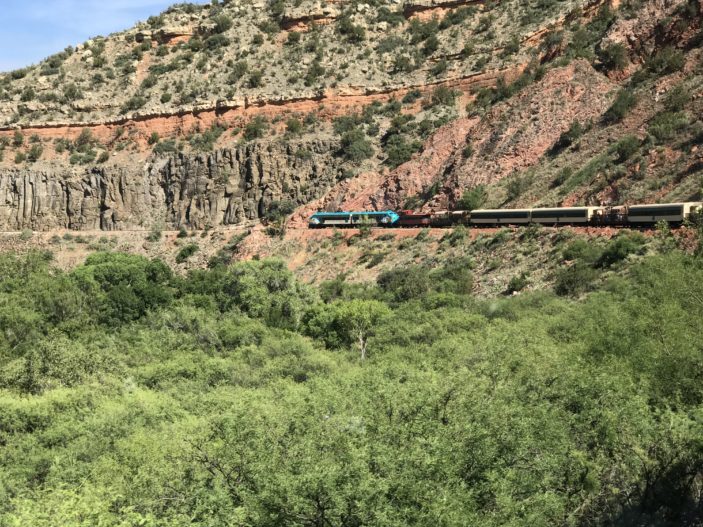 From Cottonwood there’s a regular bus service (The 2 Red Line) that will take you to the Verde Canyon Railroad, or you can organise private transportation. It’s a 10 minute drive. 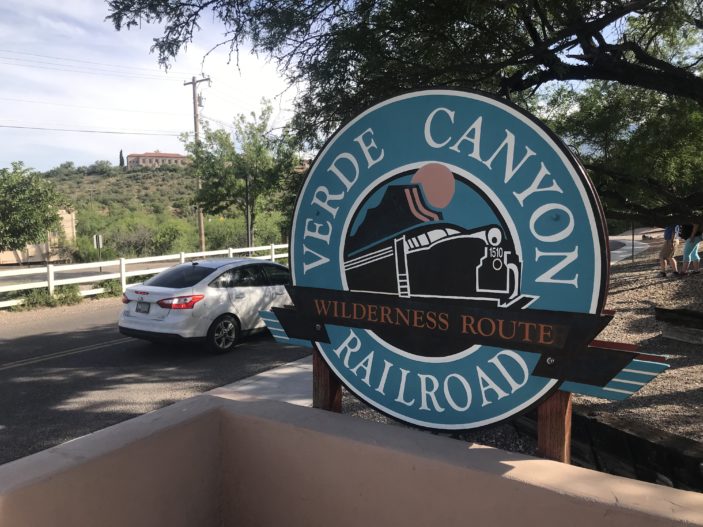 Unlike Grand Canyon Railway, the destination of Verde Canyon Railroad is the railroad itself, with the line being operated for commercial purposes since 1912, and this scenic offering opening up in 1990. Basically, you travel along the 20 mile stretch of railroad, and back again. The carriages date back to the 30s, with the car I rode in – the Santa Fe – still with all the original trimmings from 1938. Along the way you enjoy classic songs about riding the train (see: Johnny Cash, the original “Locomotion”, etc.), and prerecorded narration along the four hour journey as you enjoy a lunch, and some drinks and snacks. 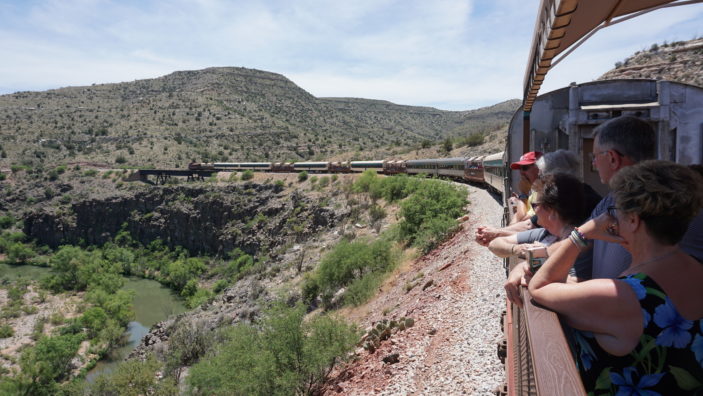 And though the sun will be beaming down, the open carriages for you to take in the fresh air and the surrounds of the picturesque canyon are truly something special.

Getting out of Arizona, there’s no better airport than Phoenix – and once you’re in Cottonwood, you’re less than two hours away from the State’s capital. Groome Transportation offer a service direct from Cottonwood to Phoenix Sky Harbor International Airport, which will be your best option between the two destinations.

The majesty of not having a car in a state like Arizona is that you’ll be truly able to enjoy and embrace your surroundings, getting to experience unique travel options along the way – even a train to nowhere, or one to one of the Seven Wonders in the World. Either way, there’s no where on the planet quite like this pocket of the world. Car or no car, definitely make it a “must visit” on your bucket list for 2020.

For more about the transport options and experiences listed in this article, visit the websites below:

The author visited Arizona as a guest of the Arizona Office of Tourism, with support from Discover Flagstaff, as well as the cities of Williams and Cottonwood. Special thanks to Verde Canyon Railroad and the Grand Canyon Railway for hosting us. Photos by the author.