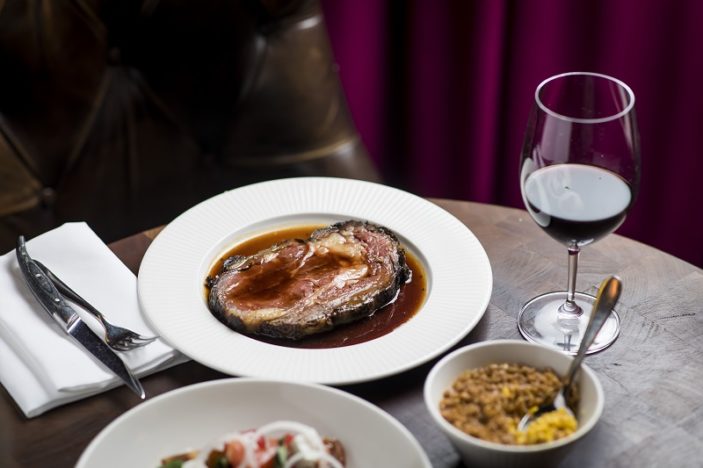 Stalwart Sydney steakhouse The Cut has added a little more meat to its bones. Mainly it’s bar. The restaurant, dipping into a suave space in the city’s historic The Rocks area, has refocused its offering by placing a larger emphasis on it’s considerable bar.

Accompanied by a sweeping menu makeover (don’t worry, the signature slow-cooked, Dijon-crusted prime rib off the bone is still there), the changes have been driven by legendary interior design studio Luchetti Krelle. They’ve given the bar area a new life, tapping into to heritage-listed building’s colonial history and sharpened the social aspect, encouraging counter dining, happy hour gatherings, pre-dinner aperitifs and post-dinner cocktails.

A new bar menu has made it much more tempting to descend down those stairs, even if you aren’t in the mood for a big juicy steak. The refurb has been marked by a new cocktail menu, with the likes of a pre-batched concoctions like a smoked negroni, gin martini and vodka martini. “High-roller” cocktails include 1930s prohibition inspired classics like old fashioned, revolver, and boulevardier.

Of course, over 500 bins of local and international wines still carves a great deal of the bar’s menu, as does over 80 single malts from around the world.

As for the food, it’s still as chunky and delicious as you’d expect. That aforementioned prime rib, which has been a menu highlight for almost an entire decade now, will now be served as a 300g standard cut, 400g “the cut”, or 500g super cut. It’s slow-roasted for four hours and presented tableside from an antique silver and rosewood trolley and served with veal jus, horseradish cream and a dash of old-school theatre.

From ‘French dip’ prime rib sandwiches and cheeseburgers to crab cakes and beef tartare, there’s plenty of the new menu that should satiate regular patrons and create new ones. We personally recommend the bar snack of oritz anchovy with tomatoes on toast.