We’ve spoken a lot over the years about the differing experiences flying Canada’s two main airlines – Westjet and Air Canada – as well as the shorter range journeys with Porter. But on a recent trip between Montreal and Toronto, I decided to try one of Canada’s more recently established budget (“Ultra Low Cost”) carriers for the first time: Flair Airlines.

Established with its current name in 2017 and livery in 2019, the carrier is one of the few to have expanded operations during the pandemic, with new seasonal routes into the USA debuting in recent months, as well as Mexico set to debut on February 2nd. In total, with a headquarters in Edmonton, Alberta, the airline’s 12 (soon to be 16) aircraft now travel to 28 destinations.

I flew their Boeing 737-Max aircraft on one of their shorter routes – Montreal to Toronto – a route they travel at most once a day. This, compared to the more frequent services by Westjet, Air Canada and Porter, makes flying Flair something of a risk, particularly with the pandemic & winter weather in mind – as if they have to cancel the flight, you may have to wait 24 hours until the next one. However, the compensation is the significantly cheaper service, which starts from around $49 – at least half the price of the competition.

Easily compared to Australia’s now defunct Tigerair, this is a no frills airline in every sense of the word, from their simple black dot logo, to just about everything costing the passenger an extra fee. The seats don’t recline and leg room is limited. I once asked the question – what more do airlines in Canada have to cut from service? A lot, it turns out! But they’re using new planes and the staff are excellent – so for a short flight like this one (not even an hour), it’s certainly bearable for any traveler.

Here’s a better breakdown of the experience. 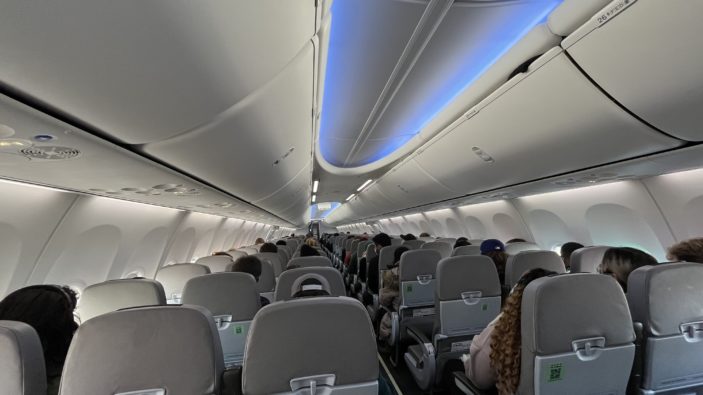 I actually had a lot of problems booking this flight through the Flair website. It kept crashing every time I tried to pay for it – on multiple devices and with multiple cards. In the end, I booked through Skyscanner, which proved to be an easy experience. I normally don’t like to book through third parties, but sometimes your hand is forced… still, like flying with an airline that travels once a day on a certain route, it comes with a fair share of risks should the flight be cancelled, so do always keep that in mind.

Once I booked, the ticket came through super quickly, and I had no issues in that respect.

As is the case for most airlines these days, the check-in process opened up online 24 hours prior to departure. Unless you’re willing to pay for it, you can’t pick a seat with a basic ticket – they don’t even show you what seat you have until you finish the process. And of course I ended up with a middle seat, which I would have had to spend money to change. So for such a short flight, I left it as is.

The airline offer no self check in machines at the airport – you’re expected to check in on the phone before you arrive. I received a QR code in my e-mail, which I had to screenshot, rather than a something to put in your phone’s digital wallet.

It was a quick trip through security, and I made it to the gate with plenty of time to spare.

Hot Tip: While in Montreal, try the EVA app to get to the airport if Uber is too expensive.

When I got to the gate, about 30 minutes before departure, there was a long line to the counter. It was never clear why – but I think people were getting carry on bags tagged? Basic fares only come with a “personal item” which must be under 7kg and fit under the seat in front of you. I only had a backpack, and they never weighed it – though it was clearly small enough to fit under the seat.

This particular aircraft landed from Toronto only a short time before we were scheduled to take off, and they started boarding as soon as that flight had deplaned. Not sure how they would have had any time to clean or sanitize the flight – this ain’t a service that seems to care too much about that.

There was no organisation to boarding, either. They just announced pre-boarding but it felt like half the flight lined up for that. And then they announced for all remaining passengers. Of course the drawbridge was absolutely packed and boarding took forever because of this terrible system. I don’t care how “budget” you are – how hard is it to have boarding zones? They were checking vaccines at the gate which slowed things down slightly – but it was good to see them doing this.

On Board Service & Experience

The flight is a standard 3-3 layout, with limited leg room and no recline (though the button for recline does oddly remain – I guess they don’t make the armrests without it). I ended up in an aisle seat, with someone asking to switch with me so they could sit with their partner. I did not object. The aisle seat (27C) had less baggage space than the other seats in the row, but it still fit my backpack.

Rather than any physical material, there are QR Codes throughout the plane to download the Flair app, where you can watch videos and order drinks. Though they weren’t offering any food or drink on this flight. With some 55 minutes of flight time this isn’t an issue – though I think it was less due to the flight time and more due to the fact that the airline isn’t offering food or drink due to Covid.

Their website currently states: “Due to enhanced safety protocols, Flair is not offering food and beverages on board the aircraft. We do encourage you to bring your own food and drink.”

In spite of the rapid turnover, the interior felt clean and new. Seats were basic and oh-so-GREY, and the only thing at your seat is a safety card in the seat back pocket. There was a seat back table though.

The bathroom at the back of the plane was a bit of a mess – they clearly didn’t have time to clean it between services – but it had everything you needed in it. There was nothing handed out by way of sanitizer or masks. But they made quite a few announcements reminding you to wear a mask for the duration of the flight.

The staff was generally cheerful, as were the pilots, and the flight had a relaxed atmosphere.

After a late departure, we landed about 15 minutes late. But it was a rapid exit once at the gate. Of course everyone stood up immediately – good to see nothing has changed in these pandemic times.

Once you deplane, it’s an easy trip to the UP Express station to get to the city in 20 minutes or so. The train runs every half an hour through most of the day.

While it’s easy to say “you get what you pay for” with a no frills airline – because you’re usually flying at a fraction of the cost of the competition (and this was certainly the case here) – there’s still a lot of room for improvement in the Flair experience. Boarding procedures can and should be revised, especially given the pandemic. We’re packed in like sardines enough without needing to stand idly for 15 minutes in a drawbridge, while people struggle to find their seats.

The lack of ability to add the flight to your Apple Wallet, which now feels like a given, also added to some early frustrations of figuring out how to display my ticket. And I also had the mentioned issues with booking the flight in the first place.

All this being said, for a flight of less than an hour, a seat with friendly service (and I must say again that the staff were wonderful) ensures you have a pleasant experience. So, yes – “you get what you pay for”. At the end of the day, it gets you from point A to point B, and so long as your flight doesn’t get cancelled, with the money you’ll save on the flight, any minor inconveniences are easily forgiven.

To book with the airline head to flyflair.com.

Want to see how this route to and from Toronto’s other airport, Billy Bishop, compares to Air Canada or Porter? Check out our article from last year HERE.

The writer flew at his own cost in December 2021. Header photo provided by the airline, other photo taken on board the reviewed flight by the author.