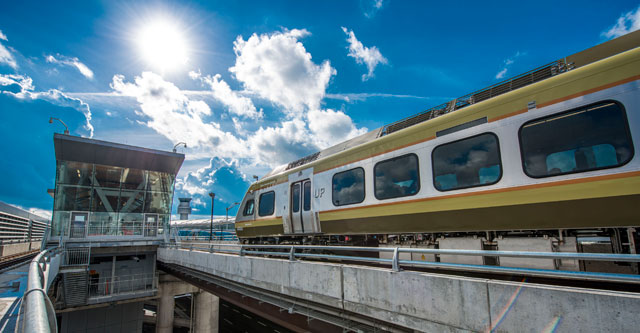 A little less than a year ago, to coincide with the Toronto Pan American Games, the Canadian city finally upgraded the public transport options between their major International Airport, Pearson, and the city’s primary train station in the centre of town, Union – introducing an express train service dubbed the UP (Union Pearson Express).

Before, you had two options: jump into a CA$55+ taxi, which – though served at a set fare – is an expensive option for solo travellers, or a bus to train option which, though an incredible affordable CA$3, was a lengthy and often difficult affair when lugging around a suitcase. An express train was something the city needed for a long time, and I had the opportunity to ride the new service not too long after it launched last year.

Once we worked out where to board – Union Station still seemed to be finalising signage when we took the service – I was initially surprised by how underused it seemed. There were no queues, and the relatively small train had plenty of room – offering welcome comfort for travellers, with ample storage space and comfortable seats for the 25 minute journey, which runs every 15 minutes. Free wi-fi also serves as an added bonus for travellers, and TVs through the train fill you in on the service and your destination.

As a service, it’s unbeatable in terms of speed and quality – these are brand new trains, on a brand new track. It’s smooth, fast and makes the whole process of going to the airport from the city centre that much easier. So why was it underused? It came down to one thing: the cost.

At CA$27.50 (about AU$29) for the brief journey, it launched as one of the most expensive public transport options in the world. Even the $19 price tag for local Presto card users (their version of the UK’s Oyster Card or Sydney’s Opal) wasn’t enough to attract anticipated users. Though affordable for one traveller, the minute you were travelling as a pair, Taxis or Ubers became the cheaper  – if often lengthier – alternative. And if you were to travel to or from one of the other two stations on the route – Weston and Bloor – it seemed that even reduced rates from those stops just weren’t enough to pull users away from the existing GO transit network – even with the time it would save the customer.

Thankfully, on March 9th of this year, Metrolinx – who oversees the UPX service – recognised the need to reduce the fare and did just that, bringing it down to a much more reasonable and affordable CA$12 (one way for adults), with a CA$3 discount if you travel on your Presto card. Concessions are also available for Seniors over 65 and travel is free if you’re 12 and under. A family of 2 adults, with up to 3 children 19 and under, can travel collectively for CA$25. Trips between one or two stops on the line were also reduced to bring them in line with a GO fare. If you’re in a rush, you can also buy your ticket on board the train with an additional $2 fee.

At the new price point, pending your final destination of course, use of the service seems inarguable. It’s faster and cheaper than Uber or a Taxi – and though more expensive than other public transport options, its ease of service, reliability and speed to get you to your destination makes it worth the extra dollars.

For more details, and to pre-book a service, head to: https://www.upexpress.com