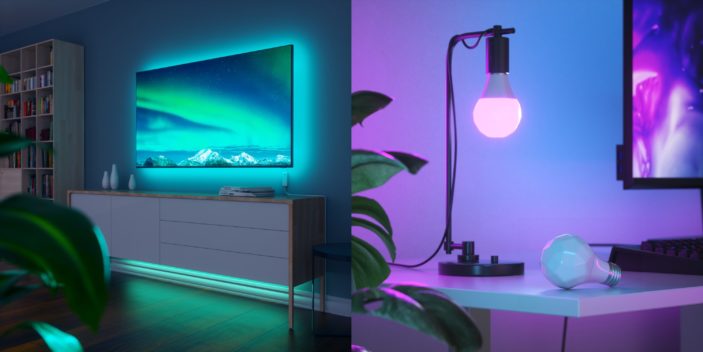 The 2m Lightstrip sports four white LEDs per LED set, and a total of 21 LED sets per metre. That translates to 7 sets per 33cm of cuttable length, if you plan to trim it down. Two of the LEDs are cool and two are warm. Two metres (or 80 inches if you only speak Imperial witchtongue) is quite long for an LED strip. Nanoleaf has one-metre expansions available as well, in case you need something longer. You can expand a single strip up to a full 10 metres before optimal brightness (2000-2200 lumens) may be compromised.

The A19 light bulb is the obvious workhorse, built to be a jack-of-all-trades. Nanoleaf is keen to point out its abilities as a bright white light. It features colour temps between 2700K and 6500K, and an average brightness of 806 lumens. Its max brightness is 1100 lumens. Nanoleaf takes great pleasure in that the bulb is a unique shape, a rhombicosidodecahedron. The benefit of this shape is that it looks pretty nice with or without a lampshade. The shape itself won’t matter to Australian enthusiasts as much as its connector — don’t worry, it’s an Edison screw, not a Bayonet.

Like all of Nanoleaf’s smart lights, the Lightstrip and A19 light bulb can be controlled via the Nanoleaf app on your Android or iOS device.

Some may be wondering why an announcement like this is worthy of note. Items like these are not new to anyone familiar with smart lighting. Nanoleaf’s competitors LIFX and Philips have been producing LED stripping and smart bulbs for quite some time. But they are new to Nanoleaf. The company has, to date, stuck mostly to decorative light panels that can be connected to create any pattern the user desires. With the Lightstrip and the A19 bulb, Nanoleaf now has a product it can put up against every major competing vertical. And competition in the space is always a good thing, it breeds innovation in a field that could get stale rather quickly.

The Nanoleaf Essentials Range is available now at most Australian tech retailers, including JB-Hifi, Amazon AU, Kogan, and KG Electronics. You can also pick them up from the official Nanoleaf Australia store.