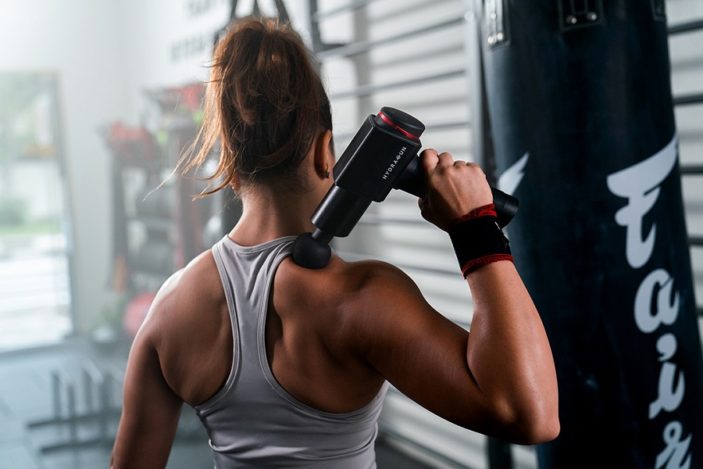 As the cross-section of wellness and tech continues to grow, we’re bound to find more percussive massage guns on the market. That’s a good thing, since to this point the market has been dominated by Therabody and their high-end theragun, with their latest top-tier model asking for an ambitious $899. At over half the price, Hydragun is looking like a healthy premium alternative, given they’ve now entered the Australian market and are looking to grab a piece of that growing pie.

In my review for the Theragun G4, I concluded that it was a powerhouse and most certainly an effective piece of kit. But a bit too expensive for anyone who isn’t urgently in need of one. The Hydragun enters that conversation with a balanced value proposition, set at a price of $399, but offering something that’s just as efficient and premium.

Planning on buying a Hydragun? For the next 2 weeks (from the above publishing date until 8th December), any AU review reader who uses the promo code “AUREVIEW50” (without the quotations) can get $50 off the RRP of $399 from the official Hydragun website. The code is valid for the first 20 users. Note that this is not an affiliate link and we will earn no commission from this. Similarly, if you’re getting on the Black Friday sales this week, we’ve got a special promo code that’ll net you $70 off a Hydragun – use “BFAUREVIEW70” (without the quotations) between now and 30th November.

Designed by a Muay Thai enthusiast, the Hydragun certainly has a lot of grunt to iron out those muscular kinks and rejuvenate the body in times of need. It gets by with a 11amp high-torque brushless motor that’s rated for 30-50dB and yet powerful enough for deep-tissue work. Noise was obviously a major consideration, since although Therabody had first-movers advantage, it’s clear competitors were able to learn from the criticisms and adjust accordingly – the biggest criticism was sound.

The previous Theraguns would be stupidly loud when they were working away on those muscles, so it’s fortunate that Hydragun sticks true to its promise of a quite motor. It’s not exactly whisper-quiet as the spec sheet claims, but it is noticeably less intrusive (30-50dB) than it could have been, making sure you won’t get any annoyed glances if you use this in the gym. There’s a deeper rumble and tighter low end to the sound this gives off; compare this with the Theragun G4 Pro, with the sound a bit sharper and more aggressive, despite the obvious attempts at harnessing the sound profile. Hydragun wins when it comes to sound, hands down.

Looking a bit similar to a vintage blow dryer, the Hydragun maintains a smaller, sleeker profile thanks to its glossy aero-space-grade aluminium casing which is mainly black around with a few head-turning red accents. The thin handle uses a non-slip nanoscale silicone wrap to help with grip and comfort. As such, the device feels excellent in the hand at a little over 1kg.

It does lack to flexibility of the Theragun G4 though. The handle is angled so its easy to maneuverer the device to reach those more niche muscles on the body, but compare this to the G4’s tri-grip angular design and the ergonomics start to look basic. Still, you have to consider that this is more than half the price.

Another big difference to the G4 is that the Hydragun doesn’t use a backlit display to serve the controls, instead using a rather large power button on the back of the gun that is at first very confusing. You hold the middle power button to turn it on and then control the intensity across six-stages. Simple enough, but its easy to confuse the functions, and I’ve had a few times where I turned the gun off when I just wanted to change the intensity. This is still a young tech sector though, so I imagine further iterations will find ways to better streamline the controls and separate them so the limited amount of functionality input doesn’t feel overstuffed.

Unlike the Bluetooth-enabled Theragun, Hydragun doesn’t have an app you can use to control the device. Which also means it doesn’t have the neat pre-set programs the Theragun has, like one designed for sleep, and others which gently guide you through exactly what muscles to focus on. This is a sore spot that dents the value somewhat, limiting accessibility for those who don’t necessarily know what they want when it comes to percussive massage therapy.

There’s a nice, sturdy carry case for the gun and all attachments included. It’s smaller and thinner than that of the Theragun so slides into a bag a bit better without taking up too much space. 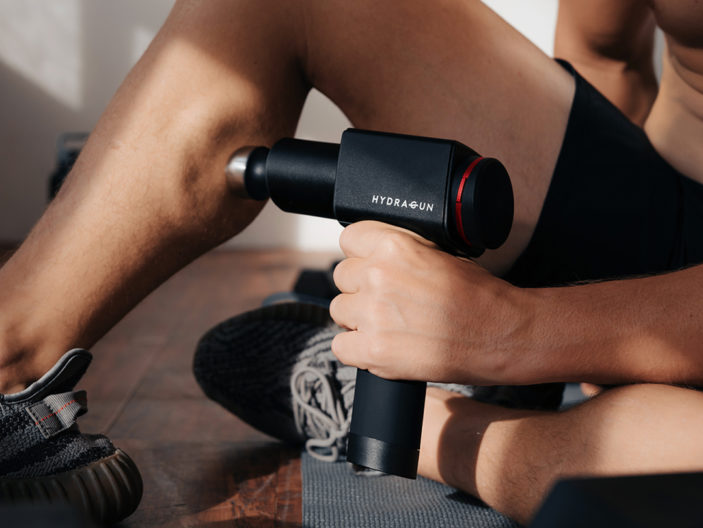 I’ve become more accustomed to the idea of a massage gun since actually using them for a few months. Having a powerful pressure repeatedly pummel the knots deeply embedded in your muscles improves blood flow and hence helps reduce inflammation and relieve tension. I’ve found it most valuable to use just before I head to sleep, given that I’m not an athlete and aside from light jogging, don’t really get around as much as I should (office job, journalist etc). It makes a notable difference in how relaxed your muscles feel and is akin to getting a great, deep-tissue massage right before you doze off. That mostly comes from my experience with the Theragun, which I’ve had for far longer, but the Hydragun has been netting me the same results recently.

Most people would find benefit from this by preventing DOMS, which is Delayed Onset of Muscle Soreness. Think about how much your legs don’t want to move after an intense spin class, or how getting out of bed after a hard workout the prior day feels impossible. This is where the market smartly targets, and the Hydragun, with its max of 3200 RPMs, has a great aim.

The issue here, like the Theragun, is there’s not much room for nuance between these percussive speeds. Soft isn’t soft enough, and the lowest setting is still quite intimidating for those who just want something softer for their muscles. I would have liked to see at least two steps down from the lowest setting.

The Hydragun comes with more diversity in attachments than the Theragun does. The six massage heads range from a ball head, flat head and bullet head, to a fork-shaped head, steel flat head and a steel round head. They aren’t as plush and gentle as those that comes with the Theragun, but are still comfortable enough. The fork-shaped head, for example, is better for the calves, which is the main muscle I’ve been using the Hydragun on (I get terrible charlie horses at night).

Based on my (light) usage, the Hydragun easily reaches its promise of 7 hours on a 2600mAh battery. Granted, for the majority of this time I just left the gun on rather than use it continuously. You don’t want to use one of these for more than 30 minutes on any muscle group, and I use it for even shorter – say 20 minutes a day before I go to bed. It’s recommended that you use it for 15-20 minutes three times a day, but that’s likely based on people who’ve been giving their muscles a beating in the gym.

Disappointingly, the gun uses a proprietary charger and doesn’t come with two replaceable batteries like the Theragun does. This may be an issue for more intensive users who are purchasing the Hydragun for professional settings, but for the everyday user, it’s really no big deal.

The $399 price tag is expensive, but still much more attractive than some of the other premium percussive massage guns out there. Hydragun also only has one model, so you have less of a choice than you do with Therabody.

It’s lucky then, that the Hydragun is an excellent massage gun that mixes a premium look and feel with solid performance – even for a casual user like me. I would have liked to see Bluetooth support with an app to make for more options and guided tutorials, but as it stands, there’s little to complain about with the way the gun actually works.

Highlights: Brings premium massage guns down to a more reasonable price; solid build and excellent grip; strong motor without being too loud; great variety in massage heads.
Lowlights: No smartphone app; lacks angular design of Theragun; lowest setting may still be quite aggressive for some.
Manufacturer: Hydragun
Price: $399
Available: Now

Planning on buying a Hydragun? For the next 2 weeks (from the above publishing date until 8th December), any AU review reader who uses the promo code “AUREVIEW50” (without the quotations) can get $50 off the RRP of $399 from the official Hydragun website. The code is valid for the first 20 users. Note that this is not an affiliate link and we will earn no commission from this. Similarly, if you’re getting on the Black Friday sales this week, we’ve got a special promo code that’ll net you $70 off a Hydragun – use “BFAUREVIEW70” (without the quotations) between now and 30th November.