Theragun Pro G4 Review: A powerhouse, but do YOU need it?

Much has been said about the professional-grade Theragun product line and its use for percussive massage therapy. Increasingly, we’re starting to see more professionals take advantage of the easy-to-use devices, particularly now that the 4th generation has been released. But given that these products are publicly available, should the at-home user pay attention as well?

Since the newly released fourth-gen of Therabody guns have come to Australia, which now includes a mini version all the way up to the high-end ‘pro’ model, I, a layman when it comes to muscles and massage therapy, tested one to see what the big deal is.

Keep in mind that nothing in this review should be considered medical advice, and while I live with someone who is a qualified massage therapist, the following is simply my experience with the gun and how much I enjoyed it as someone who has no significant injuries – but quite a few persistent muscle aches. 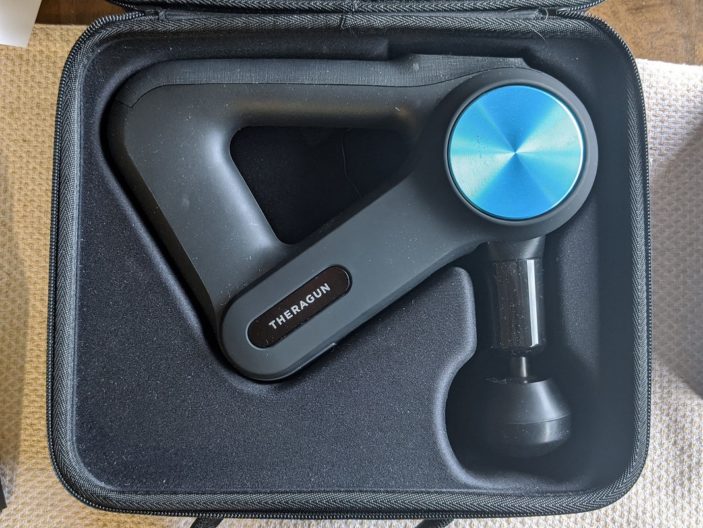 Traditionally operating under the name of Theragun, the brand, founded by Dr. Jason Wersland after a motorcycle accident, has just gone under an enormous transformation to become Therabody. It’s now a company that will soon have its own CBD product line, moving into a more solidified role in the health and wellness community while still leaning heavily into their widely acclaimed massage guns.

The guns themselves are still being released under the Theragun brand, which for the fourth-gen has welcomed four different devices. That’s the Theragun Pro sitting at the top-end, followed by the mid-range models Theragun Elite and Theragun Prime, and then with an entry-level, portable option called the Theragun Mini.

For this review I’ll only be looking at the Theragun Pro as that’s the device I’ve been able to spend almost a month with.

Performance: Do You Need It? 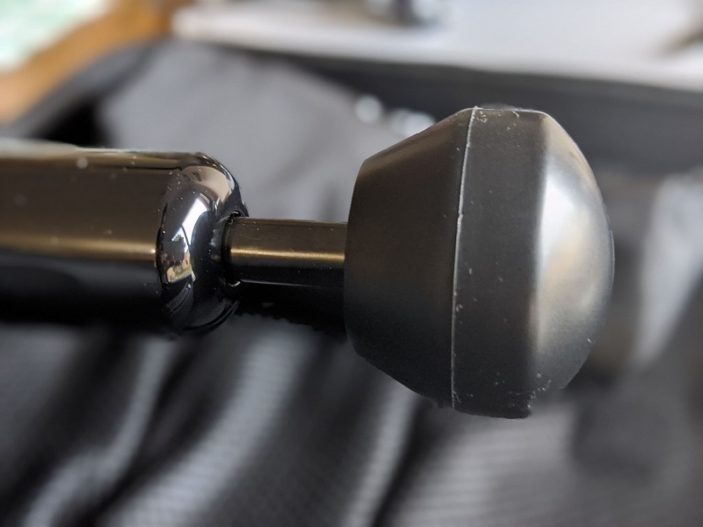 The major claims that have been consistently reported about the Theragun is that it can expediate post-workout recovery, assist in pain management, act as an on-demand massage therapist, and work wonders for relaxation and reducing stress. This also extends to pre-sleep routines, helping those who may have sleeping issues relax at night and calm the nervous system.

That last one in particular is of interest to me personally. I may not have any significant muscle pain to relieve, but I have suffered from pervasive and relentless sleeping issues since I was a teenager. Has using the Theragun Pro most nights helped me, even slightly, relax at night? Yes, but only significant when it’s on days where I have exerted myself with work around the house (we have been in lockdown, after all).

With a wide range of uses, it’s easy to understand how Theragun could then appeal to the everyday user outside of the professional setting.

But it would also have to be treated with care. I am lucky to live with someone trained in massage and who has thorough knowledge of the muscle groups, so she has helped me maximise its use on areas such as my neck and lower beck where I sometimes suffer strain. It most definitely helps when it comes to relieving even minimal tension.

This is where the accompanying smartphone app is most useful. The Theragun is a smart, Bluetooth connected device, and it syncs up well with the curated programs available on the app. You simply connect it, then choose – in a whole ‘swipe right or left like Tinder’ fashion – which curated programs relate most to you. Do you want a program to target the lower back? One to help you sleep at night?

The programs each come with suggested time, pressure, position, and clear instructions on what muscle groups to focus on for the given purpose, as well as what attachment to use. You connect to the Theragun, press play, and follow in a linear fashion, with a slider controlling the five-speed function, from 1750 and 2400 percussions per minute. Within that range, you can also choose a custom speed to individualise comfort. 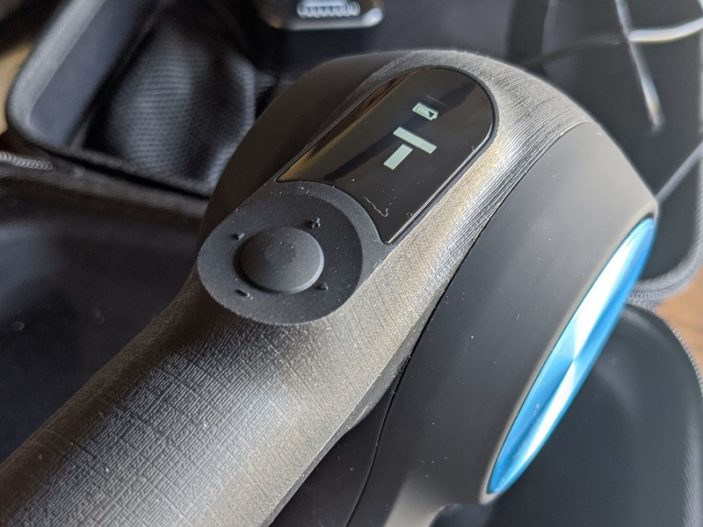 Although the lowest speed, 1750, is still quite aggressive with a stall force of 60 pounds and amplitude of 16mm. I do wish there were lower settings to ease into it for beginners, but the main function by which it creates heat in the muscles and improves blood flow and nerve stimulation is consistent and necessitates the rather aggressive feel. Besides, you can always use the softest attachment (more on that below).

Regardless. The programs do seem to work quite well. I mostly used the Theragun Pro with the sleep program and had noticeable results drifting off feeling much more relaxed. As mentioned above, this was more relevant on days where I would do some strenuous work around the house and go to bed with some soreness in the muscles.

You can use the app to pre-load programs into the device itself to make it easier and quicker to access exactly the routine you want. These can be scrolled through using the left and right directional buttons that surround the main power button on the device’s control panel.

This panel sits under a narrow OLED screen which is mostly used to display the current speed (toggled by up and down directional buttons, like the volume on a TV remote). Why we needed something as expensive as an OLED I’m not quite sure, but it does play into the genuinely premium look and feel of the Theragun Pro. 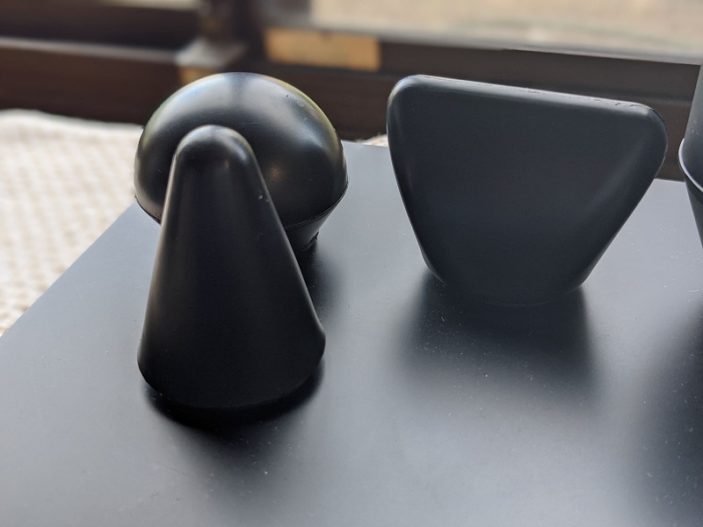 I mentioned that the app lets you know which attachment to use. And the Theragun Pro wouldn’t nearly be as effective if the designers hadn’t had the good sense to include a wide variety of these vastly different tips.

Shipping with the device are six different attachment heads, easily interchanged with a simple twist and pull motion. The “Dampener” is the standard one for general use and small to large muscle groups, while others like the “wedge” is more ideal for shoulder blades, the “Thumb” for trigger point areas, the “Cone” for hands and feet, and the foamy “Supersoft” which I often preferred over the Dampener for my sleep routines (the app tells you to use the Dampener). 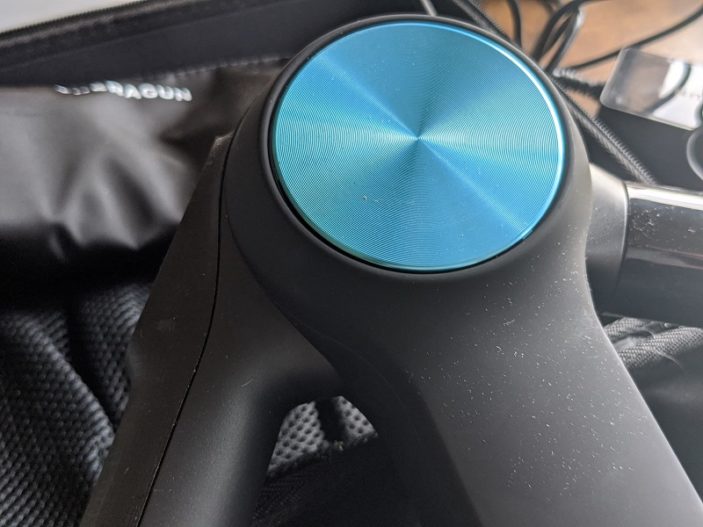 One of the most impressive things about the Theragun Pro compared to others on the market is just how sleek and premium the build quality is. It’s minimal, with a plain black body and attractive blue accents on either side. There are only a few buttons on the thing, with the biggest being towards the bottom to pop the cartridge-like battery out, and near the arm to shift it into one of four different arm positions.

These arm positions complement the overall ergonomic design of the Theragun, which is distinctively triangular in shape to allow for many different gripping styles. This essentially makes it much easier to reach certain positions on your own, like your lower back, without having to strain.

Theragun ships with two batteries, each lasting for around 2.5 hours, a well-built carry case with enough pockets for the batteries and a smaller pouch for the attachments, and a three-piece charging port. The batteries do take some time to charge, so it’s advisable to have one charging overnight. Although just having one on a full charge should be enough for most at-home cases, with two only really being a necessity for those in professional settings who may be using the Theragun for extended sessions. 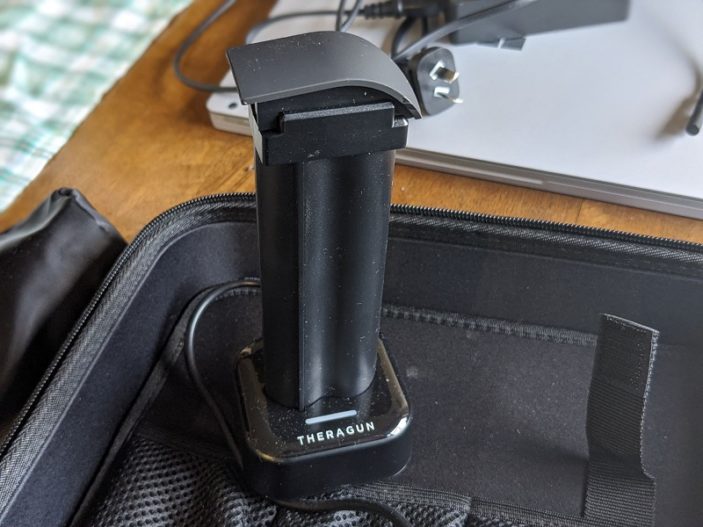 The other important part of the design is what’s under the hood, and it’s likely the gearbox has gone under a swift redesign to help address the number one complaint against Theraguns in the past. That is, they are too noisy.

Having not owned a Theragun before, I can’t directly compare with any credibility, but I can tell you that from what I have heard of previous models, The Theragun Pro G4 has a smoother sound that’s not as harsh. It’s still quite loud, but instead of sounding like a jarring drill has been let loose in your home, it instead sounds like someone’s using a blender.

At A$899 the Theragun Pro G4 is a hefty investment and the price tag is really only justified if you have substantial and ongoing issues to fix. I have no doubt – from a combination of research and experience – that the Theragun would address those issues, but for anyone who just needs it to sleep and perhaps wind down after a workout, the less expensive models should be the way to go.

Also, there’s no doubt the use of an OLED panel would have upped the price a bit. But it’s a largely meaningless inclusion.

Instead, look for the A$649 Theragun Elite, which is still quite the investment, but also the $499 Theragun Prime. The most wallet-friendly option is the A$349 Theragun Mini, and if they all essentially perform the same function then I’d say the lower-priced model is the top choice for people like me.

By same function I mean similar attachment tips, keeping the surface area small (as compared to a foam roller) so you can actually target specific muscles. And that’s ultimately the biggest thing working for the Theragun. It allows for the kind of specificity that other devices just can’t offer, which is extremely valuable for people with very individual needs and localised pain.

Highlights: Noticeable results even with light use; exceptional build quality; comes with many different attachments; sufficient battery life; easy to use, with easy to follow programs; ergonomic design.
Lowlights: Even the lowest speed is quite aggressive; not quieter, but softer; very expensive; why do we need an OLED?
Manufacturer: Therabody
Price: A$899
Available: Now

Review based on a unit loaned by Therabody.