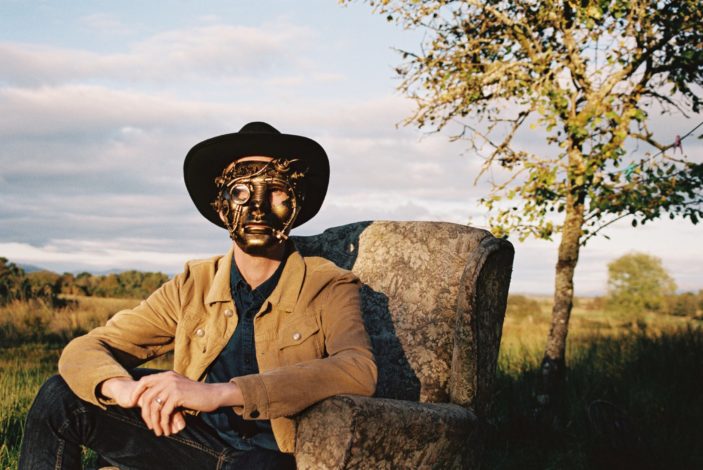 The creativity that’s gone into the production of this album, is amply matched in the project’s fictional backstory. A heartbroken cyber-cowboy, forged in Colorado, but programmed off of Scotland’s West Coast. Armed with catalogue of classic country downloaded to the hard drive, and a pitch-perfect auto-tuned voice.

Pinewood, with his steam-punk inspired mask, is of course a pseudonym, but it doesn’t really matter. All gimmicks and clever marketing aside, No Life is an impressive album. A collection of quality alternative country delivered with a twist and in some style. The use of autotune probably won’t appeal to the die-hard country music lovers out there. Though if anything it’s more faithful to the traditions of country music than a lot of contemporary country out there these days.

One of the album’s lead singles is “Hotel”. Mournful and melancholic, the track practically oozes those sad country vibes, and demands you break out the whiskey. An ode to a derelict and dilapidated rural hotel that’s now been boarded up. It’s imagery that has particular resonance at the moment, what with the mass disruption experienced in the hospitality and tourism industries globally. Despite the mournful tones, it’s a beautiful track, the guitar work is particularly emotive. Vocally, it hits the spot too, with the auto-tune deployed sparingly, but to great effect.

A.R. Pinewood’s real identity is easy enough to discover. You need only to scroll a short way through his twitter page to work it out. However, that said a bit of mystery never hurt anyone, so maybe don’t look too closely. Just stream “Hotel” and the album instead.

“Hotel” is available now. A.R. Pinewood’s debut album No Life is out now via Lost Map Records. Order a copy HERE. You can also keep up to date with Pinewood via Facebook, Twitter and Instagram.