Track by Track: Salarymen take us through their new EP Head in the Sand 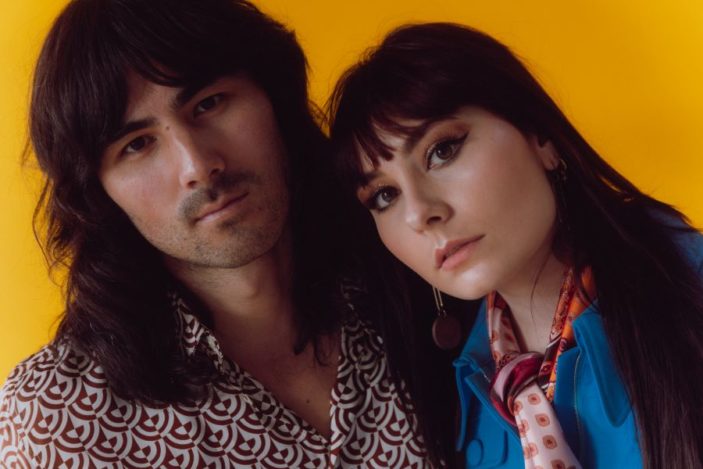 We’ve been fans of Sydney duo Salarymen since their debut single “Please” was released in November of 2019. Fast forward three years, and today they are releasing their second EP, the fabulous Head in the Sand.

For those late to the Salarymen story, the duo is a collaboration between Thom Eagleton (Wild Honey, Burn Antares) and Renee del la Motte. The EP features two new songs, the lead track “Summer’s Coming” and “Toe to Toe”. Rounding out the EP, are previously released singles “All in Vain”, “Young Guns” and “Rerun”.

“Summer’s Coming” might be wishful thinking to most of us in Australia at the moment, but if ever there is a tune that will put a smile on the dial, it’s this one. It’s a summer-tinged ray of sunshine, reminiscing on all that is great about summer, late days, and fun-filled times with friends and family. It has lush harmonies and vintage vibes. With classic Beach Boys as well as Best Coast and Real Estate feels, this will have you grinning ear to ear.

“Toe to Toe” features Thom on lead vocals, and covers the intricacies of long-term relationships. It features some sweet guitars and their signature harmonies.

The band are about to embark on a tour of Japan, before returning to Australia for a show on the 10th of December at the Vic on the Park in Sydney. Also, the band has today also announced a run of shows on the East Coast in February next year.

To celebrate the release of the EP, Renee has put together a track-by-track breakdown, so do press <Play>, be uplifted, and read on.

Salarymen – Head in the Sand – Track by Track

This EP was almost entirely self-recorded and produced by us in our home studio, so we’re really stoked to get it out into the world today. We definitely didn’t take the easy route playing the role of songwriter, studio engineer, producer and mixer all at once, but it’s extremely rewarding and we’re very proud of the result. Releasing an EP or album can feel slightly lacklustre in today’s single-obsessed music industry, but that hasn’t stopped us from pouring our hearts and soul into this body of work.

We wrote this song on the first weekend of spring, after having come out of a miserable wet winter. Then we recorded it a few weeks later. From start to finish, the entire process only took about a month (which is good for us)! It’s supposed to be tongue-in-cheek and basically references all our fave Aussie summertime activities, touching on everything from margaritas and mosquitoes to nudie swims and Sunday sessions. It’s a little simpler and more laid-back than the other songs on this EP, and that’s deliberate. Instead of our usual complex synth-heavy arrangements we wanted to try something new and write a carefree, happy tune that people could sing along to straight away. Some key influences for this track were Best Coast, Wet Leg and Real Estate.

The Strokes were a massive influence on this track. It’s about the insurmountable influence that social media has on our lives, in both a personal and professional context. The chorus lyrics read “Please stop trying to make yourself look cool, you’ll only ever end up miserable. There’s always someone better off than you, and now they’re firmly planted in your view”.
They refer to a time when people didn’t know what their friends were doing every minute of every day, and how the culture of social media reminds us constantly of what we’re missing out on. This has led to a massive increase in insecurities and a desire for people to constantly be “seen”. As musicians, it can sometimes feel like social media followers are deemed more important than the actual music you’re making, so the lyrics have layered meanings.

Cast your mind back to the day of the Robb Elementary School shooting in Texas. The whole world was equally dumbfounded and frustrated at how this preventable tragedy had happened again. In the coming days we processed our anger into this song, written about the willful ignorance of politicians who continue to put profit over lives. It’s got a sense of desperation and bewilderment in the chorus “Thank God that I’m alive tonight”, but it’s also very easy to listen to and the meaning could go straight over people’s heads. We have a habit of taking dark topic matter and pairing it with bright, summery riffs – I guess it makes it more digestible and gives us an outlet to express our feelings without adding to the misery of the news cycle. This was another one that we recorded in our home studio and released in a hurry – we wanted to throw our two cents into the conversation about gun control while it was on everyone’s minds.

This is another brand-new track on the EP! It’s about the stresses of long-term relationships and navigating complex emotional territory. Or is it about Thom’s foot fetish?!! We’ll let you decide 🙂 It’s actually a few years old and we’ve been keeping it in our back pocket for a rainy day, so now felt like the right time to release it. You’ll hear a bit of Alvvays and a bit of Fazerdaze in thee, with some bittersweet chord progressions and our signature harmonies of course!

We wrote this track smack bang in the middle of lockdown, which sounds totally boring and overdone I know! But it’s actually pretty cool because we recorded and produced the entire thing all by ourselves and we’re really proud of the result. By the time you’ve heard it 100 times you don’t even know if it’s good anymore! The instrumentation is purposefully dreamy and ethereal, letting the listener escape briefly for a few minutes. It’s part dream-pop and part psych-rock, influenced by the likes of Beach House and Tame Impala. In the latter half of the track, the chord progressions turn quite chaotic, which is supposed to capture the idea of being trapped inside a bad dream, kind of like Groundhog Day.

The band will be touring Brisbane, Byron, Gold Coast, Melbourne, Sydney and Wollongong in February 2023. Keen an eye out on their Facebook page for details.