Track by Track: Key Out talk us through their new record Anthropomorphia

Sydney trio Key Out have released today Anthropomorphia, the follow-up to their debut LP, What (do) you see. This is a seriously beautiful album, with tender harmonies, pulsating walls of sound and lush layers of synth and guitars. Lovers of New Order, Joy Division and local legends, the Underground Lovers should find plenty to dig in this short but sweet album. There’s no filler here – 10 songs, 24 minutes of polished diamonds.

The album was recorded in a home studio and then mixed and mastered by Wayne Connolly (Amy Shark, Matt Corby).

Paddy Haid from the band (vocals, guitars, bass, synths, sequencers, percussion),  wrote the following notes about the process behind recording the album, as well as the track-by-track description. So crank it up, have a listen and enjoy it.

We didn’t set out to make the record we did. When we started organising ideas and demoing, we were going to make a noisy rock record. And while we’ve always liked the way that bands like Joyce Manor or Sneeze or The Magnetic Fields or Guided by Voices could craft complete two-minute pop songs, they weren’t the template for these ones. It was more a process of trial and error, helped along by a few people.

Last year we sent off a handful of demos to Brendan Webb – we’re big Sandpit fans – to chat. He was very generous with his time and insights, especially into vocals and arrangements. We often recalled these comments when pulling the songs apart and putting them back together in different ways.

We made our previous record with J Walker from Machine Translations over a week in his studio in Gippsland. Talking to him about sound and recording approached gave us the confidence to try to do this one ourselves. He used both top-shelf and low-grade gear to create sounds that were interesting. He used constraints to his advantage, without a locker full of fancy microphones (though he did have some of those).

When we had eight demos we went to Big Ibis Burger, Peabody’s practice space, and set up our mics to put down some bed tracks. We had done some overdubbing before but had never recorded a drum kit or done a whole record. We kept this simple, trying to catch a live sound through a few strategically placed mics. A weekend later, we had eight live takes to overdub on and polish. We thought six tracks would make the cut and we’d have a solid ep.

Doing the recording we gave ourselves a lot of scope to push the songs in different directions. We spent a month over summer recording and re-recording parts. Sometimes guitars sounded different in the morning compared to the evening, or with a mic shifted a few centimetres left or right. Other times we doubled electric guitar parts with an acoustic guitar. We realised some songs floated nicely without the amplification, so we started cutting things away. We programmed sounds in a DX7 synth and sent beats through delay units. And we focused on central melodies and constructed arrangements where vocals, guitars and synths claimed the stage and arrangement supported rather than competed. Two new songs emerged and two others changed beyond recognition—‘Dog’ went from being an angular rock song to a close mic’d acoustic track while ‘Chorus’ became post-punk electro. Slowly, the album began to take shape.

‘Dog’, along with ‘Stray’, was also the first song with finalised lyrics, and they became the basis of the album concept. The songs on this album are all written through or about creatures in suburbia. Some are more literal, some less so; most have space for people to project whatever they want into them.

It was pretty clear when each song was done, and we were happy with the recording. That said, it included layers of synths, drums and loops, guitars of all sorts, homemade percussion, and harmonized vocals – things we hadn’t necessarily envisaged setting out to make a simplified record.

We thought we could do with some help mixing and got in touch with Wayne Connolly, who did an incredible job. He balanced everything, added the odd synth or loop to bring parts out, used cascading reverbs to add or remove space, and managed to minimise the stumbling around, mic kicking and general recording ineptitude we had introduced.

“Buildings”
This song is about a remote place – escapist but hopeful. It was a clear album opener. The arrangement is a bit of a journey, building over its length. It starts with an acoustic guitar and a narrow frequency of drums, then collects elements on its way – doubled vocals, harmonies, crosscutting bass and droning guitars – before the filters fall away and the band propels it to the end. The guitar solo was one of the first things we recorded live at the practice space. It has a couple of ‘jazzy’ notes in there, and we considered replacing it, but it just captured a moment that we liked.

“Chorus”
Chorus was our first attempt at using sequenced drums. There are real drums under there hanging over the end and at the beginning but the 909 programming is a defining feature. The guitar comes in half a beat before a square count, and shifts in and out of line between the verse and chorus to shift emphasis. The vocals fall into a spacey repetition before drifting away in the outro. We made a robot for the Chorus video with cardboard boxes and silver paint, and tried to capture some quarantine madness.

“Stray”
The spark for Stray one was finding a day-old cat in the park while writing these songs. He lives at Key Out HQ now and appears on the record cover. It’s about stray/feral/wild creatures and the comfortable distance we put between ‘us’ and ‘them’.

There are a lot of layered guitars on this track. The sonic reference was Sometimes by My Bloody Valentine and although it ultimately doesn’t sound much like that, it has distorted guitars and no drums for a while. The rhythm section comes in after an extended intro, with an urgent post-punk bassline and cross-cutting drums, and some sampled electro drums.

“Dog”
The inspiration for these lyrics was a dreaming dog making expressive noises and ‘running’ in her sleep. It’s about perspectives and realities and how another species dreaming is a couple of unknowns removed from where we often are – complex but maybe not that different.

Dog underwent a big shift between demo and record versions. The demo had a square beat and dissonant guitars, but it just fell into place the more we subtracted until it became a double-tracked acoustic whisper. We like the wolf vocal in the second verse too.

“Fire”
Fire was finished while Australia was burning at the beginning of the year. We always liked the second half of the track, particularly the vocal effects and guitar, but the first half wasn’t quite right. After completing a mix in the studio, we sampled some analogue radio signal and cut it in half.

“Bird”
This song is about a bird in the city, ‘above the trees, beneath the jets’. The inspiration is a magpie with a broken foot who lives at a local park. She drifts between her group and other people who move through the park, and has been visiting for a couple of years.

This was one of the earliest demos, and it changed a lot during recording. The booming drum kit and electric guitars were cut and replaced with shakers, sampled drums and a percussive acoustic guitar. Wayne had an idea for some cool bleeping synths in the studio, and Caroline some spacey harmonies.

At 3:44, this is the longest track on the album, but would be closer to the shortest on previous releases.

“True”
We joke that True is somewhere between the Lemonheads and Kokomo. If it ever gets a video, we would like to ask Helen Bidou to star in it, in a cocktail bar. True came from an attempt to build an entire song around an unchanging chord progression, which we had never done before. It was also the first track recorded on acoustic guitar that encouraged us to experiment with more minimal arrangements. The dynamics come from dissonant synth notes, electrical buzzes and toy percussion (including a shaker made from bells collected from xmas crackers).

“Moonlight”
This is the second of the two last-minute album additions. It’s a bit of an abstract thought about memory and was sparked by a chord progression, a drum loop and a delay unit. We were unsure if it was a clean, overdriven or chorus drenched guitar song, so we recorded each and melded them together.

“Echolocation”
There is a great bat colony nearby that was the starting point for echolocation. It’s about listening to the world. There are some guitar string rattles and fingers on fret board squeaks that Wayne did well to tame, but are really on theme. An early cut had some waltz-type drumming, but they were wound back for another minimalist arrangement with synths floating around then coming together in a 60s pop-strings type crescendo.

“Edge”
If Buildings was the clear album opener, Edge is the clear closer. Buildings is about striking out into the world, Edge is about stopping to look around when out there. This was another of the early compositions that shifted form a few times before starting to make sense the more we took away. 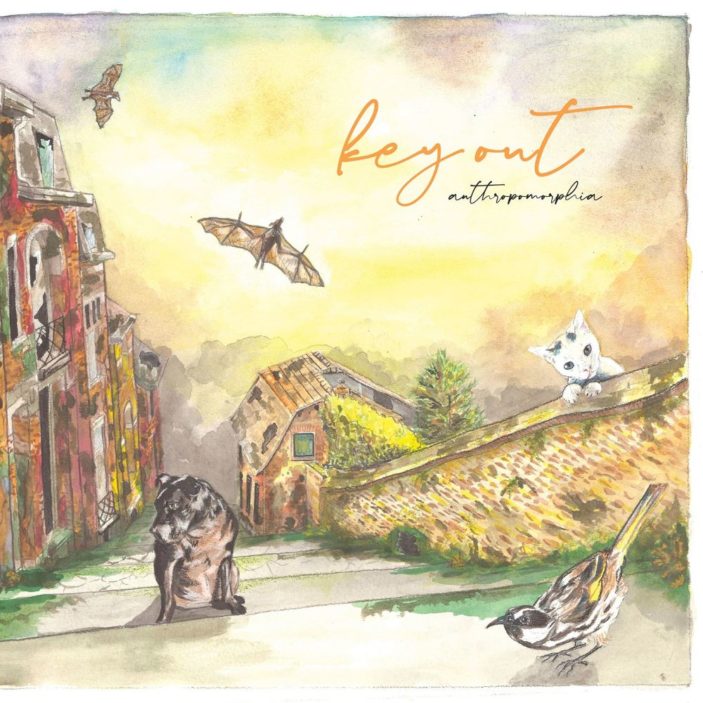 Key Out’s new album Anthropomorphia is out now via Half A Cow Records. A limited-edition marbled-vinyl pressing can be pre-ordered HERE. You can also find Key Out on Facebook and Instagram.