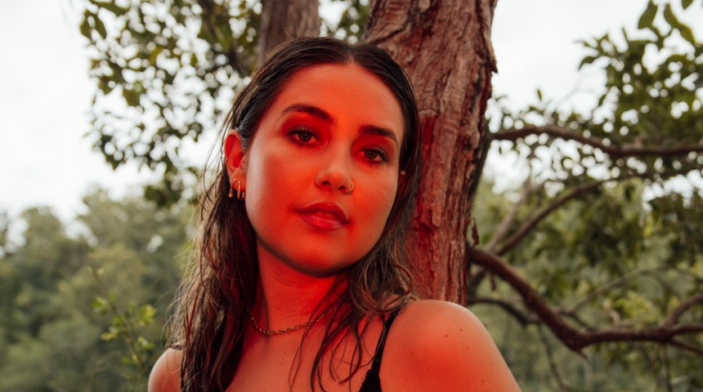 Singer-songwriter Jem Cassar-Daley has been wowing us with her talents since last year, with tracks “Letting Go,” “Changes,” and “Like it More” showcasing a soulful indie-pop sound, backed by stunning vocals.

Today, it’s all coming together with the release of debut EP I Don’t Know Who To Call. Of the release, Jem says:

“This project is very close to my heart… Its personal, raw and like a glimpse into my personal journal. It was also an EP that was only made possible with the help of my family and I am so fortunate to be surrounded by such supportive and inspiring people to pull it all together. The cover is a pastel drawing of my Grandma’s home drawn by her, and my dad features on a few of the tracks and helped me to coproduce. I hope you enjoy listening as much as we enjoyed making it!”

To celebrate, we asked Jem to break I Don’t Know Who To Call down track by track!

I wrote this song hanging with Tia Gostelow last year here in Brisbane! I had a little idea for the start of a song and we started jamming on the keys and guitar and the song grew from there. Tia is a great friend and such a talented musician, so the session flowed so well with plenty of laughs in between!

Brooke, James and I started in the studio with a few chords on the keys and chucking around a few melodies for the vocals. I was going through a bit of a difficult period in my personal life at the time, so I used this write to channel those emotions into the song and be vulnerable for a minute. I am so happy with how “Changes” came about, and I am incredibly lucky to be able to write with such wonderful people.

I wrote the song with Garrett in his studio over two sessions. I walked into the first session with an open mind and no particular idea of what I wanted to write about. We started jamming on the guitar and keys and the song started to take shape from there! I’ve really enjoyed writes like these, as we don’t really know what to expect or what direction the song will go in but we just go with it!

I wrote “Oh No” at my first ever APRA SONGHUBS on the Gold coast last year, where I met Ali Barter and Tom Eggert. We had a session together and started jamming on the guitar and the song took its form from there. The vocals in the final track are actually the original demo vocals recorded in Bignote studios! We felt that the energy from that day was hard to recapture so we kept them.

This song is personally my favourite track on the EP. I wrote “Standing Still” with Jen Boyce in their Brisbane studio. I had a little guitar idea and a few melodies to start with and the story was one that we created as the session went along. We wanted to capture the sadness of trying to rekindle a relationship after time apart with someone that’s moved to work away from home. It’s realising how much has changed in that period of time and while their life is constantly evolving, you are still in the same place.

I wrote this song when we were all in the thick of lockdown when we couldn’t travel and Stradbroke Island was constantly on my mind! I spent most of my holidays there as a teenager with my friends and have some of the fondest memories. It would take us almost 3 hours to get there without a license but we never complained and loved every minute of our time there.

“I Just Don’t Think I’ll Ever Get Over You”

Colin Hay has had such an influence on my life, and the song I chose to record is one song that particularly moved me. I chose to keep the production simple like he did, with just the piano and a solo cello track, performed by the incredible Rory Smith.

You can catch Jem Cassar-Daley at Brisbane’s The Triffid for the I Don’t Know Who To Call EP release on June 9th. Tickets HERE.
In the meantime, stay up to date via Jem’s Facebook and Instagram.