With festivals banned due to the current pandemic, organisers have either had to postpone, cancel or in the case of the Johnstons of Dashville in the Hunter Valley, think outside the square.

‘Dashville’, near Belford, in the Hunter Valley in NSW has been the home of the Gumball Festival since 2005. This little gem of a festival, situated within a beautiful property filled with eucalypts, has blossomed from its humble beginnings. These days, up to 2,500 people swoop on the property the weekend after Easter. It’s a festival of wide-ranging acts – from folk bands to well-known indie bands (think Hoodoo Gurus and You Am I) to Black Sabbath cover-bands, in a cruisy laid-back, BYO, chilled out atmosphere.

The Dashville Skyline, it’s sister event came a little later, with 5 of these now under their belt, it has had a more country-music focus.

With COVID, and all festivals being banned, both Gumball and Skyline were cancelled for 2020. The Dashville team came up with the concept of a series of concerts over 2 weekends. The first weekend was on the long weekend, just passed. Concerts are allowed, festivals are not, and they have adeptly worked within the restricted guidelines.

For William Crighton, it was just himself and his wife Julieanne. I’ve seen William Crighton in various forms a number of times, usually with a band, and I’ve got to say this performance was epic. The connection with himself and Julieanne is electric, and it was a memorable set. He showcased a number of new songs, as well as the old favourites. If you’ve never seen him play live, hunt him down. The power of the delivery and intensity is always formidable and his rich powerful voice captivating.

Fanny Lumsden was jumping out of her skin with excitement at playing a live gig again, though it’s fair to say this was a common sentiment amongst all the performers. It was a treat to witness, and her set whizzed by in a blur.

Sunday night had a supergroup of CJ Stranger and Magpie Diaries, as well as Catherine Britt, Ben Leece & Left of The Dial and Chase The Sun.

All four sets were great. CJ Stranger kicked the day off with his artful alt-country. Joined by Magpie Diaries, his ardent story-telling and opportunity to cut loose on the stage was well-received. Catherine Britt, a star on the country scene was bubbly and engaging. The night rocked hard with Ben Leece and then Chase The Sun. It was over way too soon.

Restrictions meant that there were only 4 acts allowed to play, within the 5-hour timeframe. This is quite different from the usual Dashville events I’ve been to. It’s not uncommon for the first band of the day to be playing by the time you’ve rolled out of bed (well, that’s been the case for me in the past!). Daytimes presented the opportunity to go wine-tasting, go for a walk, or laze around and read a book.

Due to the pandemic, numbers were also severely restricted, from 2,500 to a maximum of 300, and punters had to sit in pre-assigned pens. They were well-sized and to be honest, it was no drama. You were seated with your mates, so provided they were still your mates at the end of the night, it was happy days.

Despite the rules, it was a super-relaxed weekend. The bar was nearby and the smaller crowd meant that there were never any queues. The kitchen was open and the food good and tasty.

There is also the option, for those that couldn’t go, to watch the gigs on Sky Ball TV. These are streaming until the end of October, with proceeds going to the artists. You can buy the tickets for the streaming HERE

The second series of concerts for the Sky Ball is running this upcoming Friday and Saturday night – 9th & 10th October, in Belford Hunter Valley, about two hours out of Sydney. Limited tickets are still available. Head HERE for tickets and more details. 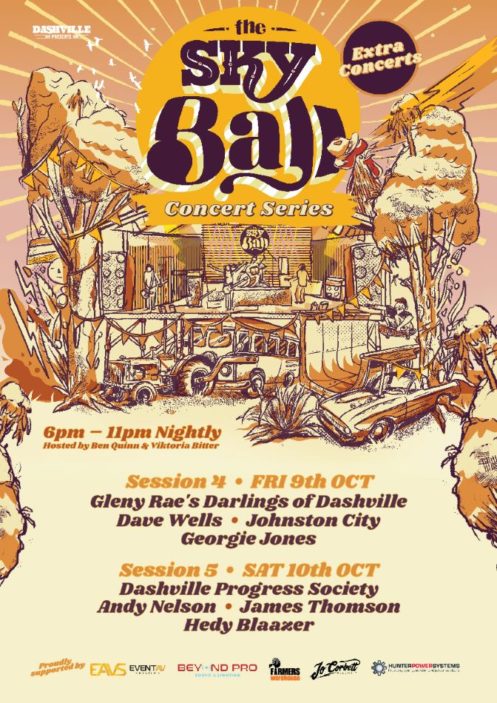 If you are missing your live music and want to get out of town, then this is the weekend for you. It’s chilled, the music is great, it’s in a beautiful location and it supports the artists.