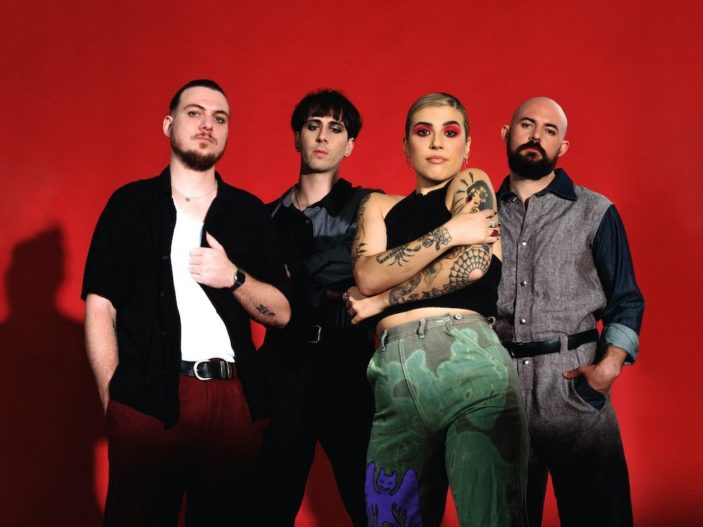 Today we’re adding ten more tracks to our Discovery playlist on Spotify and Apple Music; including two singles that we exclusive premiered earlier this week. This week, our Track of the Week goes to WAAX, with a  new tune that might surprise you with “Dangerous”, a poignant piano ballad.

“Dangerous” was co-written with ’90s rock megastar, Linda Perry, who fronted 4 Non Blondes, and who has written for P!nk, Christine Aguilera and Gwen Stefani. It’s undoubtedly one of those ‘torch songs’, such is the tenderness in it. We can’t wait to see it played live. It will be a dramatic contrast to the rest of their high-energy raucous set. The band has a new album coming, At Least I’m Free, due out on August 5.

Joining them on the playlist this week is performer and composer William Barton, with his stunning take on the Chuck Berry classic “Johnny B. Goode”. Set to feature on the upcoming Chess Records tribute album Everybody Knows I’m Here, the cover – which is unlike any other – features Barton on vocals, didgeridoo, guitar, percussion, and keyboards. And if that wasn’t enough, he produced the track too. It’s a unique and captivating interpretation of one of Rock N Roll’s most iconic tracks.

The incredible Anna Calvi is back with a new song, “Ain’t No Grave”, specially written for the latest series of Peaky Blinders. “Ain’t No Grave” will be on her upcoming EP, Tommy, due May 6. Bishop Briggs has today released “High Water”, an emotive track that tells the story behind Bishop’s traumatic journey of losing her beloved sister who passed away last year.

“Do You Know What I Mean?” is the latest single from Luxembourgish indie surf rock band Sun Smash Palace. And yes, before you click through to check, Luxembourg is landlocked. The single is the first from their upcoming EP, and has proven to be pretty catchy. Reminiscent of San Cisco, Sun Smash Palace are here to help us all cling onto the last vestiges of summer and breezy weekend afternoons at the beach.

Finally, we have two exclusive premieres, “Do You Want Me? from Reckless Coast and “Not A Break-Up Song” from Zac Eichner.