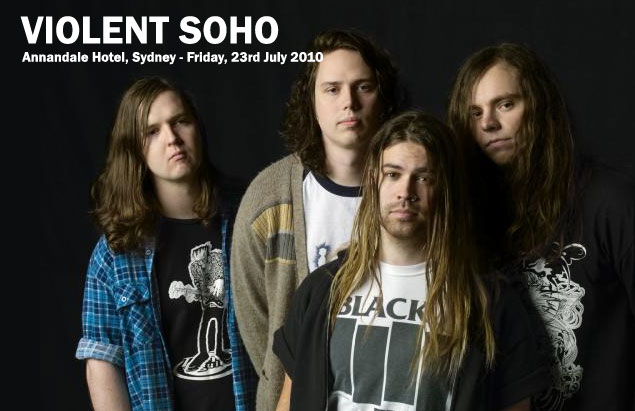 It is difficult to imagine, when observing the masses of leather jackets, studs, and dirty beards at the Annandale on Friday night, that these crowds were here to see a band whose most popular song references Jesus in its title. A self-confessed stoner rock band, Violent Soho were here to ignite an explosive release for their new self-titled album, as well as showcase all the live tricks and techniques picked up whilst touring with Dinosaur Jr. in the USA.

The first of the three supporting acts, Little Lovers – a three-piece band from Brisbane – walked on stage with the sort of awkwardness you’d expect from a band about to play a set of self-defined humourous music. It didn’t seem as though their main priority was to make the crowds laugh, however. Rather, they expressed a desire to just charm us all with their quirky music and cuteness, which turned out to be a successful endeavour. The soft vocals and mellow rhythms seemed to inspire a sort of soft head bopping amongst the small groups of long haired men holding schooners of Tooheys New.

Next up were Butcher Birds – three sexy women, and a sexy man who looks like a woman. Butcher Birds played a set of angry, loud music which was contrasted and harmonised by the sweetness of the female vocals. Although the guitar riffs were brilliant and catchy, leaving no room for anyone to stand around not moving, the band refused to really dive into the physicality of playing live music, preferring to just stand around strumming their guitars and looking hot. Playing a genre which was much closer to that of Violent Soho, the band at least succeeded in proving the blatant banality of the audience’s musical preferences, as they all began to thrash about and deeply get into the music.

The final support for Violent Soho was Scul Hazzards, who succeeded only in providing sufficient naptime for the fans at Annandale before Soho would take the stage. Whilst the band did seem to reel in a couple of fans for the show, they failed to really capture the attention of those who’d not heard of them before, such as myself. Noisy, ear-bashing guitars and screechy vocals aren’t really the kind of qualities you’d be looking for in top-notch music.

Despite the display of musical butchering prior, Violent Soho managed to play an electrifying set which had hair swishing and necks cracking mid-headbang. The band really got into the heavy tunes of the music they were playing, and seemed determined to prove themselves to those skeptics who believe radioplay has negatively impacted on the quality of their live shows. “Jesus Stole My Girlfriend” had even a couple of bouncers outside getting into it, and it’s blindingly clear that Violent Soho are able to entertain a wide variety of crowds. However, although the band managed to successfully translate the sound of their recorded songs live, and had fans leaving in a happy, satisfied trance; it is without a doubt that they were upstaged by the supporting acts (namely Little Devils and Butcher Birds).