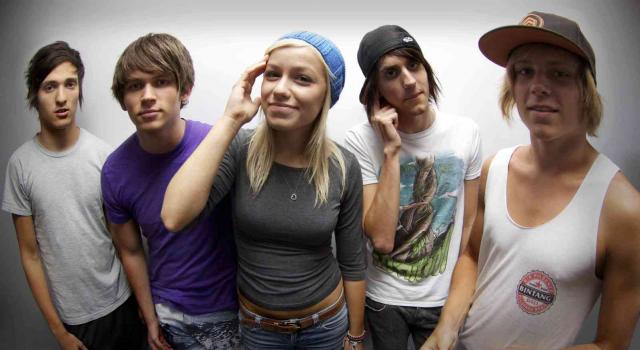 For Tonight Alive, the past two years have been dedicated to the promotion of their debut album — an effort that has been a huge success. But their recent show at The Hi Fi marked the last show in that era. With the release of their second album awaiting them the next day, our Aussie rockers had one last chance to ask us their favourite question: What Are You So Scared Of?

The night began with the young band Forever Ends Here. Their music definitely brings to mind comparisons with All Time Low, but their stage presence was playful enough to give them their own feel. This made a nice contrast to the serious undercurrent of their performance — a determination to play to the best of their ability. This obvious passion, coupled with their skill and confidence, made for a very enjoyable set. I won’t be surprised if we hear a lot more from them in the future.

Next up was Brisbane’s D at Sea. I saw him the first time in September of 2012, so I was interested to hear how he’d developed his sound. One of the major differences I noticed since then was the actual vibe of his set: it was more upbeat, with a greater amount of audience participation. This was apparent on both his covers, and his newer songs, such as “Last Day” and “Anchors and Diamonds”. Between all the noisy rock of the night, D at Sea’s acoustic set provided a moment of peace.

The final support act of the night was Hands Like Houses, who I’ve been wanting to catch for a while now. Their combination of heavier rock and more experimental electronic sounds made for an engaging soundscape, while the band’s explosive stage presence inspired the first mosh pit of the night. My highlight of their set was the song “Shapeshifters”, from their latest record, Unimagine. While lead vocalist Trenton Woodley occasionally had to strain for the higher notes, his energy was impressive; even choosing to close their performance with a running leap off the stage and into the reaching arms of the crowd.

At 10:30pm, Tonight Alive finally made their entrance, before transitioning into their brilliant new song, “The Ocean”. The deep green and blue lighting was obviously intended to create an underwater mood, but the audience had their own plans. As Jenna began to sing, several audience members threw ocean-themed inflatable objects into the air, including beach balls, a surfboard, and a dolphin. This seemed to amuse the band, and they booted the unexpected props back into the crowd whenever they ended up on stage.

The night was comprised mostly of the material from their first record, from the lighthearted “Thank-You And Goodnight” to the always emotional “Amelia”. We were, however, treated to two other new songs: “Lonely Girl”, which is even more scathing live than in the studio recording, and the first-ever performance of “The Fire”. For me, this was by far the highlight of the night. It was exciting to see the band’s passion for their new music, and the crowd’s eager support.

The one drawback of the night was the sound quality: Jenna’s microphone cut out entirely during “Listening”, and continued to play up after that. Luckily, the fans were more than happy to cover for her when this happened, and she never once stopped singing.

They closed with “What Are You So Scared Of?”, but even though we all knew it was coming, it had more impact this time than ever before. The band gave a touching thank you speech before the final song as a farewell to the old album cycle. Their second record was due to go on sale at the merch table as soon as they left the stage. The final notes — the lights went up — and audience and band alike took their first steps towards The Other Side.