When you’re stuck playing to the same audience over and over, it’s easy to slip into a mode of monotony, which has been a challenge thrust upon lots of WA musicians including artist Michael Dunstan with Premier Mark McGowan’s hard border.

Of course, the rebuttal is at least they get to play but that doesn’t mean the challenge isn’t any less real. Thus, Dunstan’s surf-rock folk three-piece band played the Rosemount Hotel on Friday night, which they were trumpeting as their final headline show in Perth for 2021.

Dunstan has promised a new album next year and there’s the hope of a return to national and international touring to promote the LP as well as the lengthy back catalogue of tracks they’ve pumped out over the past two years, which you could liken to Kyle Lionhart in range. Friday’s show was a farewell of sorts, with a two-thirds full crowd featuring plenty of friends and faithful, and the opportunity to experiment.

Supported by Helen Shanahan, with her wonderful voice, and the equally chill James Abberley, Dunstan arrived on the stage adorned with his trademark cap over his long blonde locks with a typically relaxed air.

The laid-back Dunstan commands all the attention on stage, despite being permanently seated, while his able bassist Wayan ‘Billy’ Biliondana and drummer Joe Franzone appear more than comfortable in their peripheral roles, even if the latter was forced into a drum solo halfway through as Dunstan tuned up as he switched from acoustic to electric.

“Endless Skies” from 2020 album In The Grand Scheme came early in the set, along with Spotify favourite “Home” from 2017 debut EP Solace to the crowd’s delight, with Dunstan utilising the intimate atmosphere to be expansive about the stories behind a lot of his songs. He is a genuinely engaging and unassuming, even if not fully polished, orator between songs. 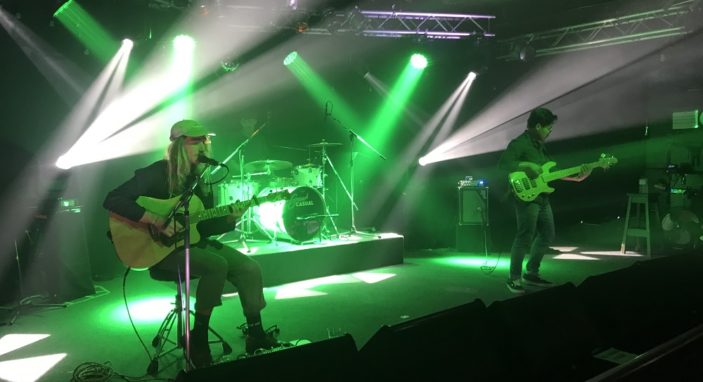 Dunstan’s music lends itself to attract a chilled-out audience content to sit at a distance, and the two-thirds full turnout combined with the layout of the Rosemount (which is a wonderful small music venue with excellent lighting and sound) reinforced this, creating the dreaded empty space in front of the band. But Dunstan casually wooed the punters forward eventually. It helped that he had a few familiar faces in the crowd, as he bantered back and forth.

Musically, the band were hard to fault, delivering a good live performance, although a handful of tune-ups between songs thwarted momentum, arguably as they tried to change up their show to avoid the humdrum from the aforementioned reasons.

Dunstan displayed his talents moving from harmonica to acoustic, as the other two members stepped away for one track. A feature is Dunstan’s unique humming, featuring lots of head-wobbling “woooohooo”s which are somewhat spellbinding and elicit a sense of calm. Finishing up with the cruisy ‘Lay In The Sun’, which included plenty of these sing-a-long “woo”s, was a nice finale before their encore.

The band, and show, were let down by the need to tune guitars constantly, which lost the audience at times. But in terms of their craft, this is a talented group led well by Dunstan who is earnest, warm and natural on stage.