Just A Gent reveals the influences behind Planet Oasis 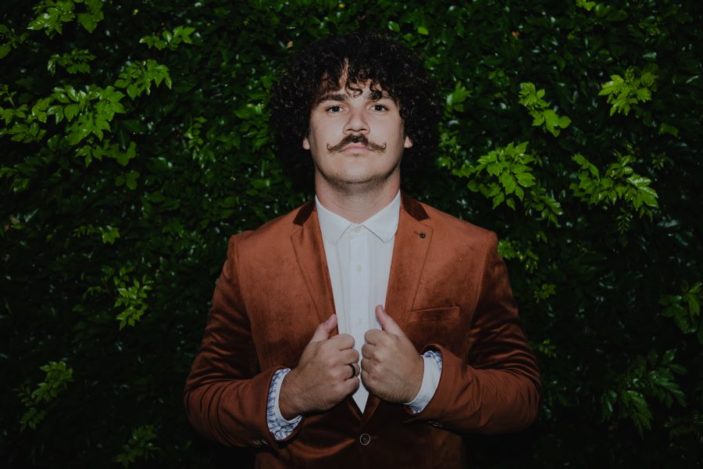 Producer and musician Just A Gent has just released his latest album, Planet Oasis. It’s hard to believe that it’s four years since his landmark record, Stories To Tell was released. That album has racked up over 20 million streams, and on Spotify, his overall streaming numbers have hit 200 million. Yes, impressive indeed, and worthy stats for such a creative artist.

Earlier this year, he has teased out some singles off the album, including “Who Would Have Thought (ft. Arno Faraji)”, “Sleeptalking (ft. Greta Stanley)”, “Lightspeed”, “Trip To Mars (ft. Sammi Constantine)” and most recently “Don’t Wait For Me (ft. Lani Rose)”. It’s no coincidence that some of the featured artists are amongst those that we rate so highly at the AU.

At fifteen tracks long, the album is varied and oozes quality. I expect it to reach similar dizzy heights as Stories To Tell. He has some tour dates organised for June and July in Sydney, Newcastle, Brisbane and Melbourne. The dates are below.

About the album, Just A Gent writes: “Creating this record spanned over five years. It’s changed a lot over the course of that time. I’ve sat on various versions of the album but felt this version was the strongest.

Most of the tracks on Planet Oasis are collaborations with some of my favourite talents from around the globe. Some of my best mates in the scene like Lani Rose, Jacknife & Samsaruh. It just felt right to be working with people I cherish and admire everything they do. I worked with Jon Hrubesch on the artworks, he has helped tell my story for the past eight years, his mind and creativity is unmatched. Wiese.world was the other leading hand in terms of visuals, we have also worked together for years and he is the animation GOAT.

It feels so good to finally be able to share this with you and I hope it takes you to places you have never been before.”

Listen to this all the way through. It’s total quality. And, to celebrate the release of Planet Oasis, Just A Gent has put together a list of five artists who have been influences. Turn it up and read on.

Making of Just A Gent

5 artists who inspired me to create and why

I was always really into experimental sounds, artists pushing the boundaries of ‘music’ but I had hardly scratched the surface until I discovered Skrillex’s myspace. He created these sounds which I never thought were even possible, the way he seamlessly turned this chaos into beautifully crafted masterpieces. Skrillex’s music opened so many doors within my mind and still to this day he does not fail to do that

Nothing will ever blow my mind the way Aviciis essential mix back in 2010 did. He took the modern sound and completely goated it with his melodies. I probably listened to that mix a hundred times and it just got better every time. His sound and songs changed the way I heard music forever and single handedly inspired me to continue creating electronic music.

One of the first albums I ever remember loving was diorama by Silverchair. Long car trips with mum and dad singing along to every single track. There was something about the way Dan bridged worlds, he just had a gift that I hadn’t experienced until falling in love with that record. The first concert I ever went to was the Young Modern / Across the great divide tour in Newy and it was that moment that made me realise I wanted to do ‘that’. I wrote so many songs after going to that show, all it took was that legend from my hometown showing me what was possible if I just be myself and create

This guy really changed the game for me. I heard his remix of Cosmic Love by Florence and the machine and it was the most powerful, ethereal sound I had ever heard. It was like dubstep meets trance meets soul and I instantly wanted to make music that sounded this powerful and carried this kind of feeling. It was Seven Lions who inspired the Just A Gent project in the beginning and even now I listen to his songs to lift me up when I’m down and give me energy in times I have none

I remember when my mate Liam first sent me Sleepless, I had only heard half of it before I knew this dude had something else. I got super excited when I found out he was playing at Groovin The Moo. I lived across the road at the time so you bet I was there and his set that night took me to another planet. I was 14, at my first festival and listening to this guy play music that sounded like it was ripped straight out of the year 3000. After that I went home and downloaded every single flume song and read a bunch of articles and discovered that he started making beats in the same Nutri-grain software that got me into making beats. It was that realisation that this guy wasn’t actually from the year 3000, he was just a kid like me and that was the push I needed to put my head down and master my abilities in sonics and production

More special guests to be announced