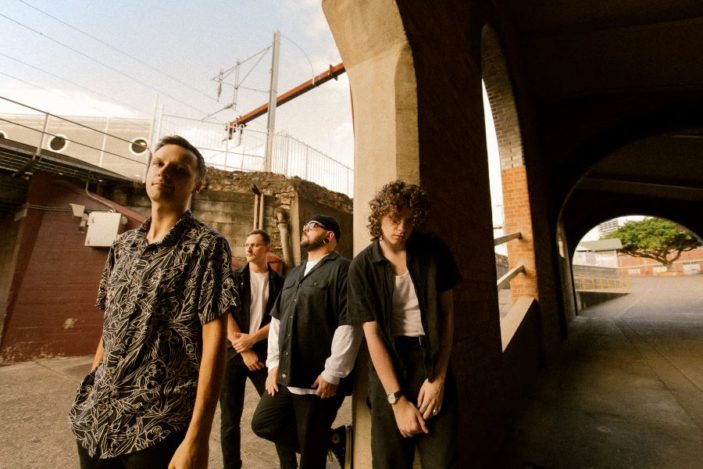 Brisbane’s pop-punk Waxflower have today released the soaring 2000’s influenced pop-rock song, “Ring”. The track has a warming nostalgic sound to it, with the gift of feeling familiar, yet has you wondering what is sonically just ’round the corner. It’s got all the feels, it soars and carries their trademark energy and killer musicianship.

“Ring” was written by frontman Tristan Higginson during a period of disenchantment, wondering if persisting with music was the right thing to do. Fortunately, he decided that it was, and describes the track as a “self-affirmation” and “a reminder to myself that it’s worth fighting odds, industry and enemies to keep my creative passion alive.”

Tristan writes about these self-doubts “I almost gave up on music before Waxflower. Questioning my ability at the backend of a decade of failed projects and crumbling under the weight of panic disorder, I recorded a demo as a last-ditch effort to get something started. A year and a half later I was playing with my heroes, beginning to do the things I’d always dreamed. It’s me trying to calm the insecurities that keep me from putting myself on the line creatively.

“Don’t let your insecurities get in the way of where you want to be.”

The band has been kicking goals of late. Their previous single, “Soak” had solid support from triple j, BBC Radio 1 and Spotify and Amazon Music. They’ve also signed with the international indie label, Rude Records. A bright future awaits.

To celebrate the release of “Ring”, Dan, Nick and Jordan from the band have put together a playlist of their favourite 2000’s era pop throwbacks. Arrgh, the nostalgia. Give it a listen and get pumped up.

Busted “Year 3000”
I remember discovering this song through SingStar 2 and it blew my mind. Hooky, cheeky and the music video was… well, questionable. Just sounds like Saturday mornings spent playing PS2.

Third Eye Blind “Semi-Charmed Life”
Although this song came out in the 90s, I’m including it as I discovered it in the 2000s (and it held strong on radio during this time). I remember walking around my house blasting this – having no idea the song was about the breakdown of a relationship into debilitating drug use.

Forever The Sickest Kids “She’s A Lady”
Synths, v-necks, long fringes and angst-riddled vocals. This song defined my 2008 style and taste. I would’ve spun this to death on streaming website Grooveshark.

The Maine “Everything I Ask For”
Another band that influences my taste & style. This song was my gateway into pop rock after discovering them – moving away from the ‘heavier’ tunes of Green Day, Good Charlotte & The Living End, into the saccharine pop hits of All Time Low, The Maine & Boys Like Girls

Boys Like Girls “Heels Over Head”
Surprisingly this band was an “industry-plant” – however, my 11-year-old self thought that they were the perfect fusion of punk & pop. I learnt to drum by putting this song on repeat and trying to play all the beats & fills perfectly.

Avril Lavigne “I’m With You”
I had a friend who gave me all the .mp3’s off their player one day in Primary School. This song stuck out to me as a hit – a bit darker but Avril at her best.

Never Shout Never “Heregoesnothin”
Classic school bus anthem. Sharing one of my earbuds with anyone else who straightened their hair. I can still remember the first time hearing this song and thinking ‘the drums sounds so bad, i love it’

The Summer Set “Chelsea”
This 2010 track probably just sneaks in, but honestly was one of my favourite tracks from the whole era. The synths, the gang vocals, this is peak pop rock in my opinion.

Breathe Carolina “The Birds and The Bees”
Not sure if technically “pop-rock” as such, actually I know it’s not. But I loved the pop-rock elements in this song. When I think of the 2000’s era, I think of Breathe Carolina. At the time I was listening to a lot of emo/pop-rock stuff, but also lots of heavier stuff. When I heard this song, the screaming really took me by surprise. I remember thinking, “okay, maybe there are no genre walls, maybe you can do whatever you want with music”

Cute Is What We Aim For “There’s A Class For This”
One of the first bands in this scene that really grabbed my attention birthing the unhealthy obsession with pop-rock during my early teen years. I love how punchy the pre-chorus is and how it flows so well into a soaring, hooky chorus. Although every time I listen to CIWWAF, all I can picture is Shaant’s strange dance moves from back in the day.

The Academy Is… “Slow Down”
One of my favourite bands from this era, this song and its album especially. This song ticks all the boxes for me: Wordy, angsty and most importantly catchy.

The Friday Night Boys “That’s What She Said”
A hugely under-appreciated band, this song has is all; ridiculously catchy chorus, synths, palm-muting, pick-slides and even a little shredding just for good measure. This song is incredibly well-written and why wouldn’t it be when it was penned by Andrew Goldstein (if you aren’t familiar, look at his co-writes on Wikipedia and have your mind blown).

Every Avenue “Where were you”
So incredibly catchy and melodic, I always smashed this song on repeat for silly amounts of time. I remember purchasing this album on CD from Hot Topic on my first trip to the US in 2007, I was like a kid in a candy store & used all of my holiday cash to buy as many band T-shirts and CDs as possible!

Backseat Goodbye “Technicolor Eyes”
One of my many YouTube discoveries in my younger years. A nice little acoustic number that reminds me of being a teenager who just sat in his room and learnt songs on guitar.