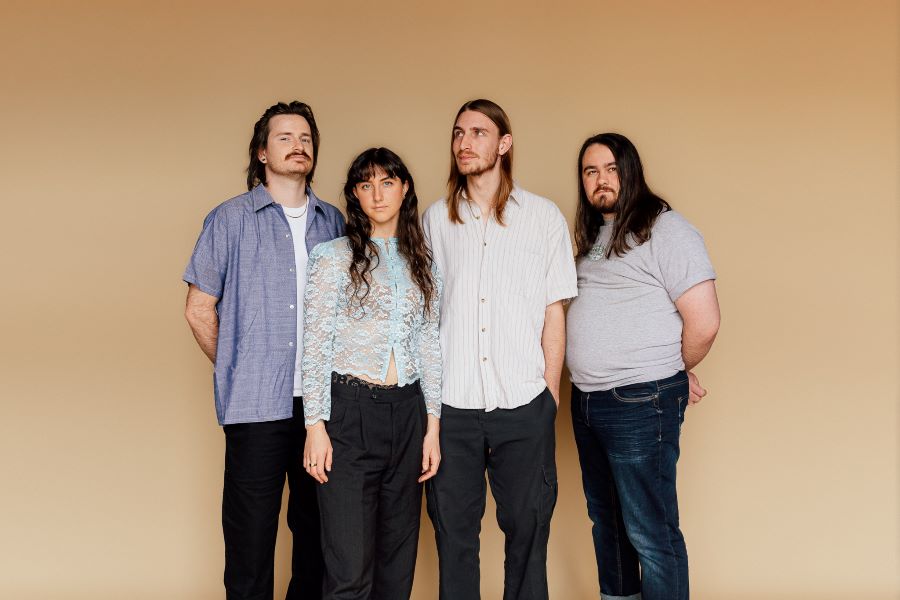 Sydney quartet Jet City Sports Club recently released the dreamy “Green Thumb”, further embedding their status as one of the exciting indie-pop groups to keep an eye out for. The title is a handy metaphor for expressing the need to keep nurturing existing relationships, and not letting them wilt.

Lilla, on lead vocals gives some insight into the track – “I started writing Green Thumb one afternoon when I looked around my apartment and realized I only had one houseplant that was still alive. So I suppose I started thinking ‘I hope I don’t neglect relationships like I do my plants!’ Jack is really good at bringing light summery and anthemic themes and fun catchy riffs into our music and so from there we just built on that before taking it first to the rehearsal studio with the band and then to Fletcher the Producer we worked on for this one.”

They’ve also recently dropped the video for the track. It has a warm old-school suburban feel to it. The video was filmed at their guitarist Jack’s grandfather’s house in Roseville, Sydney. The tone of the video neatly maps the light-heartedness of the track, and was made on a tight budget, as the band states: “We want people to feel an intimacy with the band and learn a bit about who we are as people with the video. We filmed it at a location super special to our guitarist’s childhood and built the set ourselves for under $50 with second hand records, both fake and real flowers and music gear which was both fun and challenging.”. It was directed by Jack O’Connor.

The track was produced by Fletcher Matthews (Clews, Sweater Curse) with mastered by George Georgiagis (Debbies, The VANNS).  Fans of The Buoys, The Beths and Teenage Joans are going to dig this.

The band is in the middle of a tour to launch the single. There are still some shows left, and if you are in Sydney, Wollongong or Melbourne, then you are in luck. All the details are below. The band will also be supporting The Vanns for their shows on NSW’s Far North Coast.

To celebrate the release of “Green Thumb”, the band has compiled a guest playlist for the AU. So press <Play> and have a read of what it was that they’ve been listening to. I’ve got to say, there are a couple of great discoveries there.

This track and the album as a whole show how indie music can be pushed into the pop sphere with complete depth and honesty of songwriting. It’s a fantastic collision .

Holly Humberstone – “The Walls Are Way Too Thin”

This track informed the vocal production a lot actually and is just a really beautiful song.

this song has such inspiring melodies and guitar parts, as well as a tonne of grit.

Inspired themes of both relationships and individuality, Julia’s lyrics always paint a strong picture of her world and it’s helped teach us to try to do the same although we don’t think we hold a candle just yet!

This track was absolutely on repeat in our household and studio, we love the chorus and the intimacy you feel with the song. Super cool band from Aotearoa / NZ worth checking out.

This song inspired “Green Thumb” purely in the fact that Beach Bunny are our bands collective favourite band. The riffs, choruses and lyrics create a perfect storm that remind us of being teenagers with hella hormones but being OK with that.

Blossoms  – “There’s A Reason Why (I Never Returned Your Calls)”

We love the pop elements these guys use in their otherwise guitar-based music. Listening to this track really helped us wrangle with what sound we want to achieve moving forward.

Fontaines DC – “I Love You”

This absolute ripper of a track is raw and poetic, it wears its heart on its sleeve and shows that it’s okay to show how you feel on a track. We tried to do the same with “Green Thumb”.

The Grogans – “Lemon to My Lime”

We actually got the opportunity to support these guys on the Sydney leg of their tour, which was mad because we were huge fans beforehand. This track is a flawless catchy tune and it’s soundtracked a lot of “Green Thumb’s journey.

It’s no secret we love a lot of music with big female voices and Connie Constance is a perfect example of a strong voice that carries message and meaning. Her first album English Rose is a masterpiece and this track is a sick follow-up, along with a bunch of other cool stuff she’s released since.