Flies In My Room: Aodhan takes us behind the songs on his debut EP 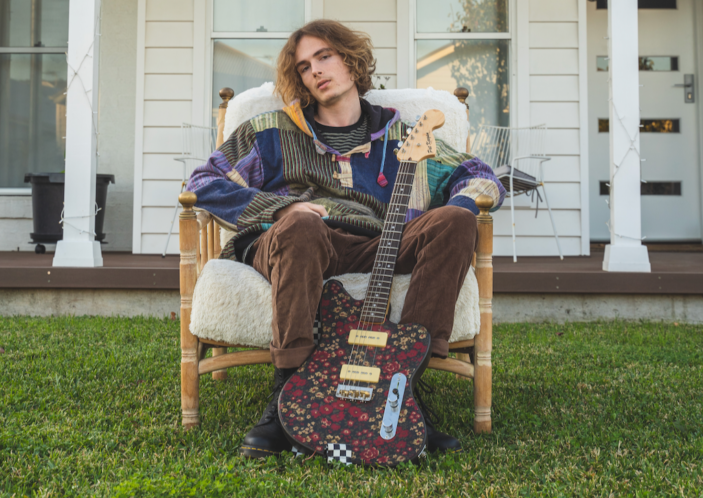 Seventeen-year-old Dharawal singer-songwriter Aodhan has capped off an impressive couple of years, releasing his debut EP Flies In My Room on Friday.

His early singles caught the attention of Communion Publishing in the UK, earning him a place on their roster; whilst here in Australia he’s been racking up the plays on Triple J, not to mention winning the Unearthed High Indigenous initiative, and placing as a finalist for Unearthed High with single “Twelve Again”.

He also didn’t escape our attention here at the AU, where we had his single “Drive” came in at 13 on our Top 40 Best Australian Tracks of 2020.

Flies In My Room is the perfect showcase for an artist brimming with potential. Even the most cursory listen highlights that Aodhan is onto something special here. He’s something of a musical magpie, taking little bits from a range of writers and genres, all whilst firmly making it his own. Flies In My Room is the sound of an artist seemingly full of confidence, but also, and perhaps most importantly, enjoying himself. Aodhan has slowly been gathering an impressive team around him, and for good reason, he’s going to be around for a long time to come.

To celebrate the release of Flies In My Room, Aodhan is here to take us through each of the EP’s five tracks one by one. So hit play and read on:

“Flies In My Room”

The idea for “Flies In My Room” came from homework and the procrastination that comes with that. I wasn’t great at focusing during my time at school so I decided to write something about it. The song is just an example of where I go when I zone out and can’t get any work done.

I was heavily influenced by Josh Pyke’s music with this particular song, using lots of the same sounds as he would, such as the acoustic band sound he’s got.

“Twelve Again” is definitely my most favourite release so far. It’s production, it’s nostalgic sparkly sound, it’s melodies, all of it is exactly how I envisioned it to be when I first began writing it.

This song was inspired by my old home before I moved down the coast and how I miss being twelve years old, when all I’d do is go hang with my friends and how we’d ride our bikes everywhere. Back when school was actually fun.

“Daily Mediation”, in some ways, is kinda like “Flies In My Room”. It talks a lot about zoning out and daydreaming and stuff. But, instead it’s a love song, not a homework song.

“Daily Meditation” is a song about imaginary love, a relationship that only exists in a daydream. But in reality, things aren’t anywhere near that, hence the last couple lines of the song.

I kinda return to my roots with this song as it’s a simple, acoustic type of track just like the song that kickstarted everything for me, “When Your Eyes Speak”.

“I’m Closed” has more of a rocky edge to it than the other songs on the EP, which means it’s the most fun to play at gigs and festivals. But, despite having such a fun sound, the inspiration for this song comes from somewhere a little bit dark.

It’s about feeling the need to keep yourself away from other people and to have some time to be “closed” so people don’t have to see you when you’re low, as such feelings can be pretty contagious.

I came up with this idea when I was fourteen and since then, the song has taken many forms. I wrote about three different arrangements for the song until I finally wrote “I’m Closed” as we know it today.

The last track on the EP is called “Just Friends” and I believe it’s the most relatable song for people around my age out of the five.

It’s inspired by a relationship I had with someone a while ago that didn’t really go anywhere as I had mixed feelings about the whole thing. But me and this person are chilling now. We still remain friends to this day.

The producer I worked with, Ryan Miller, and I had a lot of fun playing with the production on this particular track, adding a bunch of wacky, climactic sounds and effects.

Flies In My Room is out now. Listen HERE. You can keep up to date with Aodhan via Facebook and Instagram.