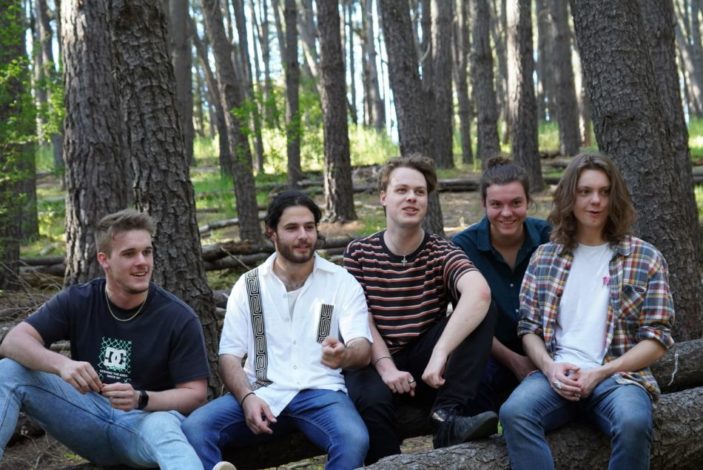 Adelaide-based indie-pop quintet Broken Waves are about to drop “Drag Me Back”. This is the first single off their debut EP, so we are naturally thrilled that they have chosen to premiere it at the AU review. This electro-funk track is a formidable and enticing taste of what’s to come for the band.

“Drag Me Back” deals with facing unhappiness head-on, and working your way through it.  The introspective lyrics reflecting inner turmoil are countered by the more buoyant and upbeat instrumentation, giving hope to a positive outcome. When dance-floors eventually come back to our clubs, this is a tune which is going to light them up. “Drag Me Back” reminds me of some of the massively successful synth groups of the ’80s, such as Bronski Beat.

Ben Lyons-Reid leads the way on bass and vocals, with Declan Oetjen on rhythm guitar, Will Physentzou on lead guitar, Heath Oetjen on drums with Matt Evans on keys.

Will Physentzou told the AU: “We are all thrilled to have the AU review premiere our new single ‘Drag Me Back’. This song has been in the works for a while and it feels ready for the world to hear it. The lyrics are deeper than our older songs and we feel our sound has matured into more of who we are as a band. This is the first single from our debut EP, with the next coming next month. Stay tuned.”

Their debut EP, Turning Point will be dropping soon. The band has made a conscious effort with the lyrics, delivering messages about topics such as mental health and politics. It was recorded last year at Wizard Tone Studios and mixed by James Brown, with Jarrad Payne mastering it.

“Drag Me Back” will be released on Friday, 29th January. You can pre-save the track HERE.