Step Up With the Latest NBA 2K22 Gameplay Trailer

If you’re an NBA fan like I am, this time of the year feels different. Spring is on the way for us Australians, and there’s just something special in the air. The fact that a new NBA 2K game is upon us, that is. Even though the wait is almost over, fans were gifted a fresh gameplay trailer for NBA 2K22, showcasing the game’s visuals and throwback highlights, complete with some new gameplay details, painting a picture that we will all soon get the chance to play on September 10.

The trailer showcases an impressive visual style, featuring current top-tier players, overlapped by stickers of past players, highlighting the similarities that the new generation shares with the old. The trailer does however, highlight some of the newer features coming to NBA 2K22. The next iteration of the long running series will feature a completely rebuilt shot contest and blocking system, complete with new animations. The aim here is to not only add another layer of skill and complexity, but to add the physicality and explosiveness that someone like Zion Williamson is capable of. On the opposite end, post play will factor into this new approach to physicality, with a range of new back-to-basket moves. 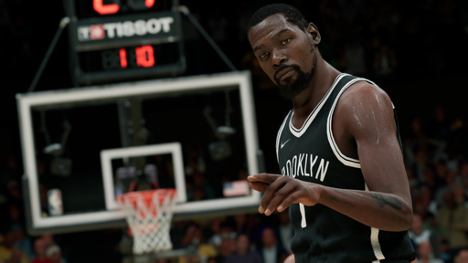 Players will also be treated to a redefined dribbling system that prioritises rhythm and timing. This is thanks to a tighter sense of control while navigating the court, allow for a greater breadth of combos and move chains. This can lead to greater shooting control, with a brand new shot meter that will dynamically expand and shrink based on both the shooter and quality of the shot. NBA 2K22 will also emphasise Shot IQ, meaning teams that look to utilise open teammates will be rewarded with even greater chances. With an elite level of handles and shooting ability, we’re pretty sure Steph Curry will reap the rewards of this new and updated system.

Finishing at the rim will also focus on an increased sense of skill and timing, while avid dunkers can personalise and customise their dunk catalogue for a wider range of slammin’ moves. In addition to dunk customisation, players can also create more balanced builds than ever before, with 80 total badges to help flesh out your player’s abilities and tendencies. Next generation consoles will also introduce Takeover Perks, which players can unlock to help strengthen their Takeover abilities.

NBA 2K22 is set to release September 10, across PlayStation 4, PlayStation 5, Xbox Series X/S, Xbox One, PC and Nintendo Switch. Find out more at the official site.