Marvel’s Guardians of the Galaxy Review: The Heroes We Deserve

I have to be honest. After publisher Square Enix’s last Marvel themed outing, Marvel’s Guardians of the Galaxy instilled a sizeable amount of doubt within me. Sure, Marvel’s Avengers was a fun cooperative experience, but it lacked any depth and heart. It seems as though the second time is the charm, as Marvel’s Guardians of the Galaxy is without a doubt a major step forward for Square’s Marvel games. Combat is engaging and intuitive, the banter is witty and fun and the narrative hits home in all the right ways. It might not be a perfect package, but is indeed an experience worthy of the Guardians name.

A Debt to be Paid

In typical Guardians of the Galaxy fashion, we find our titular crew of ragtag outcasts in trouble and in debt. While I won’t spoil the narrative in detail, it’s a thrilling, planet-trotting ride featuring iconic characters, sticky situations and close calls. The journey to pay off a single debt evolves in interesting and exciting ways which keep the story admittedly linear, but incredibly focused. This allows additional breathing room for each of our heroes to develop and engage with one another. It’s also incredibly tough to pinpoint exactly which Guardian steals the show. While everyone is sure to have a favourite, they’re all treated to some highlight reel moments and quotes.

The story also decides to dip into Peter Quill’s past, but it’s never invasive or off-beat. We occasionally cut back to a young Star-Lord, unveiling the man (or boy) behind the legendary galactic outlaw. These moments subtly build and bind to the current story without ever derailing it. Thankfully, each Guardian pulls their own weight, contributing their own personal struggles and feelings throughout many of the story’s conversations. The banter is as consistently witty as you would expect it to be, building off the momentum and character portrayals of the Marvel films. However, it’s clear that developer Eidos-Montréal were not afraid to teeter onto the road less traveled for some memorable and heartfelt moments. 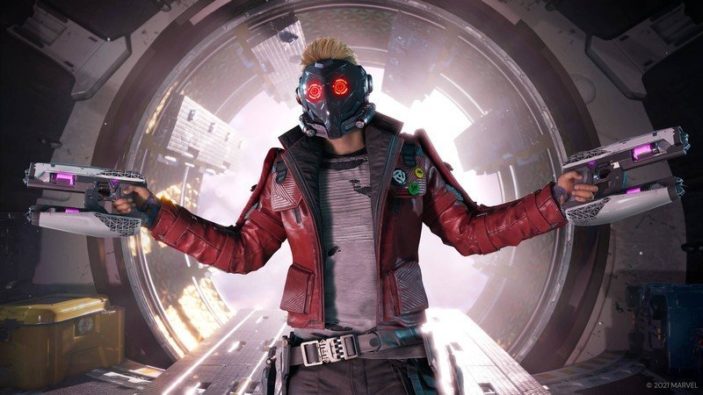 The narrative also presents somewhat branching storylines. While you play exclusively as Star-Lord, you’ll also have the opportunity as leader, to call the shots. Be it deciding which path to take, or which Guardian’s plan to side with, can lead you to drastically different encounters and moments. While they usually culminate with the same or similar result, I would encourage at least a second play-through to experience it all.

I Need a Hero

Gameplay and combat mechanics alike are incredibly solid. You’ll spend most of your time navigating planets and environments while chatting away with your fellow Guardians. Thankfully, combat encounters feel naturally placed and dispersed, allowing both aspects of the gameplay to shine. However, combat steals the show by the end of the 15 hour story, proving fast-paced and chaotic, while intentionally stacking the odds against you, forcing you to utilise your team mates.

Along with his trusty dual Quad Blasters Star-Lord can utilise hand-to-hand combat and dodge with his rocket boots. Combat is straight forward, as Peter will lock onto surrounding enemies, while close quarters combat is confined to a single button. This might sound shallow, but given you’ll be tasked with commanding and directing the other three Guardians, it’s all the depth you’ll need. 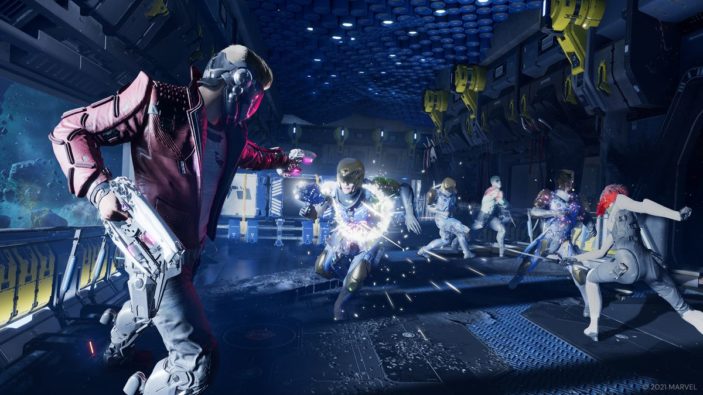 At any time, players can hold the left shoulder button (L1 or LB) to select and command each Guardian in battle, prompting an attack or ability. Given each enemy requires a different approach, you’ll find yourself juggling the fight mentally as much as physically. Some enemies may need to be stunned before they can be damaged, in which Drax can help. Some enemies may need to be constrained in order to remain vulnerable, and Groot would be happy to oblige. Some enemies may need to be dealt major damage, or a finishing blow, in which Rocket’s grenades and Gamora’s deadly blade take over. While boss battles are few and far between, combat here truly shines as the Guardians’ teamwork is put on full display.

It’s in combat where Marvel’s Guardians of the Galaxy feels it’s tightest; a true compliment given the narrative and character interactions are already so strong. Last but not least, should the fight become too overbearing, Peter can activate ‘the huddle’. By tapping both shoulder buttons, Peter can rally the troops for a second wind. In this moment, Peter must choose what to say before heading back into battle. Give the wrong advice and only Peter will be affected, but give the right advice, and watch the Guardians of the Galaxy live up to their name, as an iconic 80’s tune blares in the background. It’s truly a morale boost on steroids. 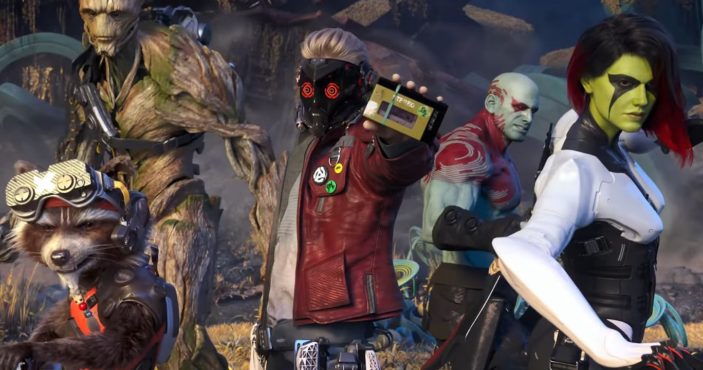 It’s only when we get to combat progression that Marvel’s Guardians of the Galaxy takes a slight tumble. You’ll get the chance to upgrade Peter’s personal perks and the combat abilities of each Guardian throughout the story. But there’s really only four per character, which are unlocked in linear order. They’re varied and effective, but if you’re like me, and unlock all abilities prior to finishing the campaign, the gameplay variety does take a little hit, particularly in the final few hours.

As the MCU has now made famous, it goes without saying that Marvel’s Guardians of the Galaxy wouldn’t feel right without some iconic tracks. Now inspired by Peter’s own personal library and childhood, rather than those recommended to him by his mother, comes a soundtrack filled with essential 80’s hits. Much like Awesome Mix Vol. 1 and Vol. 2 of the films, this compilation is worth a purchase as is. From WHAM!, to Culture Club and Tears for Fears, you’ll find yourself tapping along in no time.

But if that wasn’t enough, Eidos-Montréal decided to create an entire album based on the fictional band, Star-Lord. It’s honestly unreal. To top it all off, Marvel’s Guardians of the Galaxy boasts some polish visually, with some decent textures and honourable performance, even if the frame rate dips ever so slightly in the more chaotic moments. 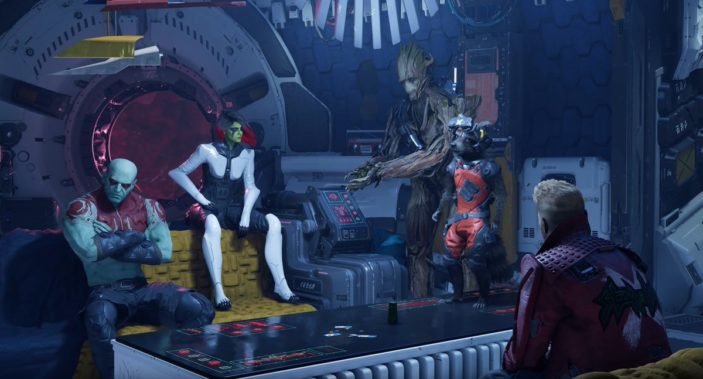 Marvel’s Guardians of the Galaxy doesn’t doesn’t necessarily bring anything new to the table, but incorporates existing ideas so well. A humorous and heartfelt narrative, paired with solid combat mechanics and a sense of style that only the titular crew know how to pull off. It’s a love letter to fans of both the characters and films, but also a game of outstretched open arms; If you’ve never heard of these guys, now is the time. Narrow progression systems and a linear narrative may hinder the longevity of such a title, but while it lasts, the ride is ever so sweet.