LEGO Star Wars: The Skywalker Saga Review: May the bricks be with you 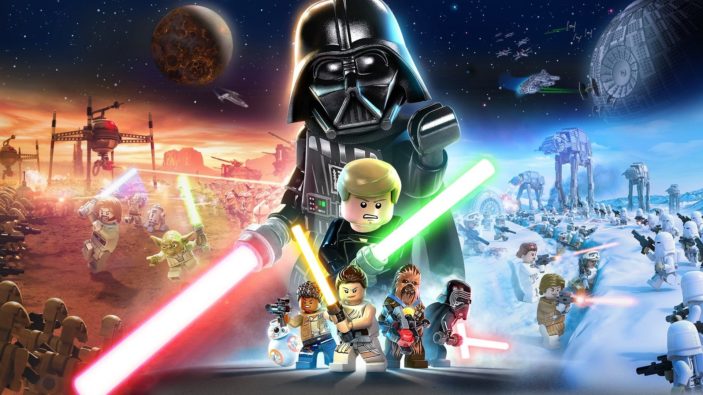 The lightsaber battles. Dogfights. Distant planets. Iconic characters. The Star Wars saga has brought with it many memorable moments that have stood the test of time. While I won’t begin to list those moments here, LEGO Star Wars: The Skywalker Saga has decided to cram them all into one neat package, reinventing the LEGO game formula all while retelling the tales of each of the nine mainline Star Wars films. The various improvements and refinements fire on all cylinders, allowing you to explore, destroy and relive each film’s set pieces with great detail and authenticity. Put simply, this is the biggest and most diverse LEGO game to date; but it also just might be the best.

A Long Time Ago in a Galaxy Far, Far Away…

From The Phantom Menace to The Rise of Skywalker, LEGO Star Wars: The Skywalker Saga allows you to play through each of the nine mainline films, in true LEGO fashion. Aside from the lovingly crafted LEGO recreations of characters and locations, it’s the consistent sense of humour that drives each chapter forward. Even some of the darker moments are handled with levity and fun, making each narrative more approachable to younger audiences. From Emperor Palpatine accidently mentioning Order 67 instead of Order 66 and causing the clones to break out in choreographed dance, to Rey losing her lightsaber when flipping over Kylo Ren’s ship, LEGO Star Wars: The Skywalker Saga is never shorty of quick, witty moments that each deserve a chuckle. The increased pacing of each chapter also removes a lot of the bland, political moments and discussions that plagued the prequel films, even if they can feel a little brief. 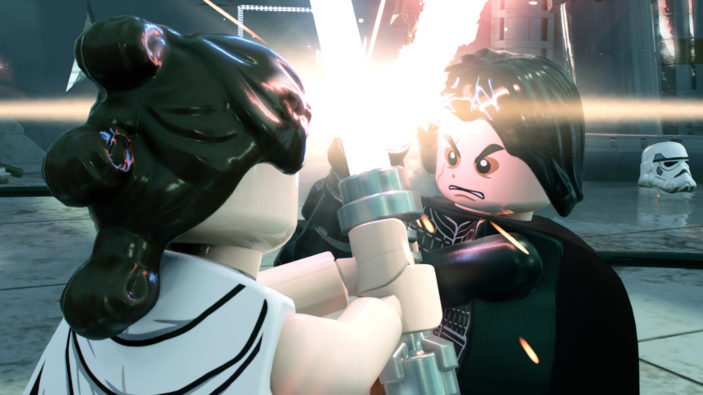 LEGO Star Wars: The Skywalker Saga also boasts an impressive amount of mission variety. Playing as each character, you’ll navigate multiple various open world hubs across the game’s 20 planets. As you can choose to follow the guide and proceed to the next chapter in the story, or simply explore some of the hidden corners of the world, you’ll rarely run out of things to do. Between hubs, you’ll also pilot star ships in open space areas, which bridge the gap between traversing to the next story beat. Much like these open hubs, you can also choose to fly about the surrounding area of a planet, engaging in dog fights and collecting studs before making your way down to the next mission. This level of open-ended progression opens up even more in ‘Free play’ sessions, but given the general story mode gives you the opportunity to explore off the beaten path for as long as you like, is a welcome feature that I hope sticks around for potential future LEGO games. Rest assured however, in between general gameplay, you’ll partake in some iconic moments recreated in glorious LEGO form, from Anakin’s pod race in The Phantom Menace, to Luke’s trench run in A New Hope. The fact that these mechanics are only ever accessible in those particular moments shows a certain level of care and authenticity, as opposed to shoehorning repetitive gameplay and twisting the story for the sake of padding; something that the older LEGO games were admittedly guilty of. Each story can feel a little short and compact at times, but it’s also incredibly focused and rarely overstays its welcome.

One Brick at a Time

General gameplay has also had a major facelift. Instead of the fixed camera angles of previous LEGO games, LEGO Star Wars: The Skywalker Saga has opted for a more traditional third-person view. In addition to this, combat has also been given an overhaul, allowing lightsaber-wielding characters to chain grounded, aerial and force-based attacks including lightsaber throws. While it lacks the nuance of something like Star Wars Jedi: Fallen Order’s lightsaber combat, it’s still incredibly smooth and functional. Blaster-wielding characters can now take cover behind walls and objects, complete with a more traditional aiming system that is also admittedly basic, yet functional. Supporting unarmed characters like droids are now effective in multiple situations, with the added ability to utilise melee attacks. They are nowhere near as interesting to play as, and serve as a means to an end, particularly in puzzle sections. However, in saying that, I don’t think I’ll ever get sick of watching C3-PO beat a Stormtrooper to literal pieces. 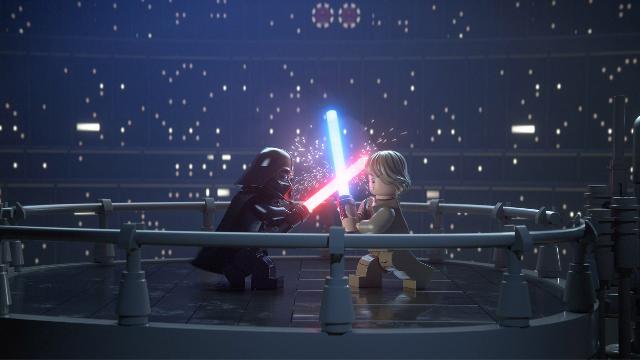 It’s also worth noting that the entire experience can be played with a friend, via drop in/ drop out co-op. It is definitely the best way to play, considering the amount of fun it is to experience and discuss this interpretation of the Star Wars Saga with another fan, even if the limited field of view can make it tricky to navigate some of the more open areas. Given the faithful nature of each chapter and mission, cooperative play could sometimes result in players having to stand by and watch an iconic moment play out as a secondary character. Remember when Obi-Wan got stuck behind that laser wall while Qui-Gon Jinn took on Darth Maul in The Phantom Menace? Yep, that will be one of you.

Aside from destroying as much of the environment as possible to collect studs, players can also collect Kyber Bricks, valuable bricks that can be used to upgrade your abilities. LEGO Star Wars: The Skywalker Saga packs in an all new upgrade system that allows players to bolster general abilities from collecting studs from a further distance to being able to sprint faster. However, class upgrades allow you to enhance various skills and attributes of certain character classes. These extra nine classes span from Jedi to droids, should you wish to prioritise playing as certain characters. These upgrades matter more so in ‘Free play’ modes, as the majority of each chapter only requires a basic level of skill. However, the inclusion of these systems adds a layer of depth I never knew I wanted, and hope returns for future LEGO games.

LEGO Star Wars: The Skywalker Saga is a charming, thoughtful, functional and deep representation of the Star Wars saga. While combat can leave a little more to be desired in terms of difficulty and nuance, it sure makes up for it in terms of scope, variety and replay-ability. The consistent sense of humour makes each chapter a joy to play through, even if the overall length of each episode feels a little short. The added upgrade and ability system adds an unprecedented level of depth that encourages exploration of new open world areas. LEGO Star Wars: The Skywalker Saga is indeed a successful fresh start for LEGO games, and I can only hope the future brings these mechanics and ideas back for more.