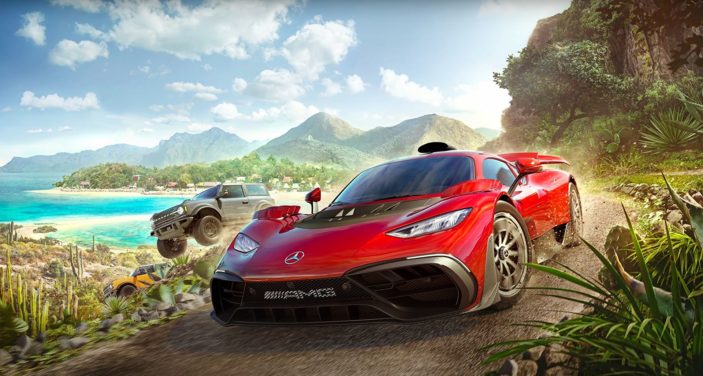 The screen is dark. The sound of an engine roaring pierces the air, as the back on a cargo plane opens. Suddenly, your vehicle drops out of the back, parachuting down to a dense, colourful Mexican landscape. As soon as you land, you blast onto the road, on your way to your first Horizon Festival. The local music plays blissfully in the background, as you’re introduced to the what awaits. This is Mexico. This is Forza Horizon 5. Many franchises try, and many fail. But if the Forza Horizon series has done anything right, it’s create a fun, accessible and gorgeous attempt at arcade racing, with a sneaky amount of depth and customisation under the hood. Forza Horizon 5 doesn’t necessarily change the structure of the series moving forward, but is without a doubt the highest point of the franchise, and one of the best racing games you can play today.

My initial impressions of Forza Horizon 5 were overwhelmingly positive, thanks to an energetic and exotic introduction. As you begin, you’ll get the chance to take control of each vehicle type across various terrains, as you prepare to make your entrance into this year’s Forza Horizon Festival. In the space of an hour, you’ll be ripping the streets of Mexico apart in a Corvette Stingray Coupé, only to be transported behind the wheel of a Ford Bronco, as you blaze through its lush forests. You’ll speed head first into sandstorms, and navigate harsh winds, torrential rain and unpredictable lighting strikes, and thanks to incredibly tight and responsive controls, it all feels fantastic. Forza Horizon 5 does a fantastic job at diversifying the concept of street racing through its various terrains and race types. Plus with over 600 vehicles to choose from, you’ll be consistently spoilt for choice. 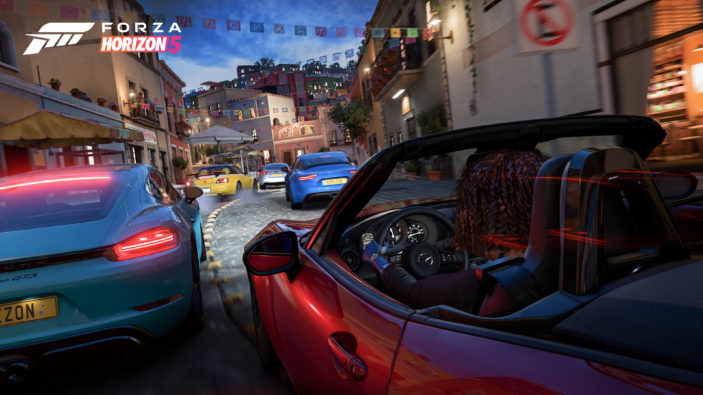 While each Forza Horizon entry chooses a new country to base its environments and landscape around, Mexico has proven to be yet another fantastic choice. If diversity and variety are the name of the game, it’s great to see a more exotic and tropical location make its way back into the fold. While I loved Forza Horizon 4, and have nothing against Great Britain, I felt as though many of the environments and roads blended into one another, without the consistent clashing of the elements, or any transitional periods of dramatic weather. Forza Horizon 3’s take on Australia was also fantastic in terms of its approach to tropical weather, but it all culminates in a ‘greatest hits’ assortment of locations within this interpretation of Mexico. There’s simply nothing that compares to spotting a storm in the distance, and heading on over with the haste of a child on Christmas morning. Across the eleven separate biomes, showcasing multiple terrains and landscapes, you’ll get what is perhaps the most visually accurate and in-depth look at another country, ever to be featured in a video game. 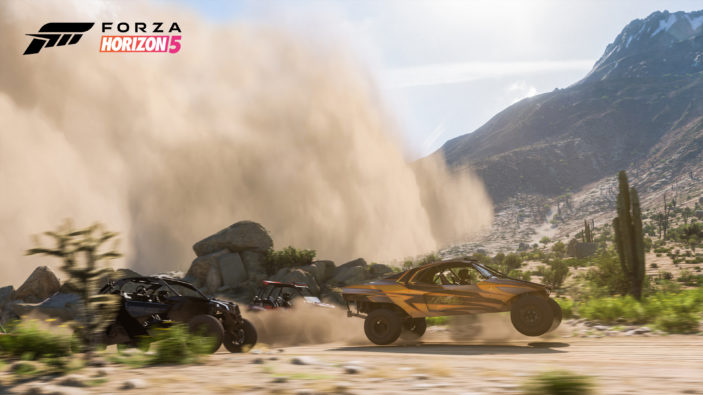 Developer Playground Games was also not messing about when they mentioned during their E3 trailer that they had set up 24-hour 4K camera rigs to capture the Mexican sky in all its glory, in addition to photo realistic renderings of each landscape. This is without a doubt one of the best looking games you can play on an Xbox console right now. Ray-Tracing is immaculate and the frame rate is buttery smooth and consistent. While Xbox One users may experience a few drops in terms of frame rate, it is definitively the best looking game the console has ever produced.

In terms of gameplay, Forza Horizon 5 is equally strong. Driving mechanics and vehicle accuracy have always proven strong, but it’s here that the series produces is tightest mechanics along with its deepest sense of accessibility and customisation. Across the board, you’ll be taking part in various main events, that will be sure to flex your driving skills across multiple tracks and locations, and in various vehicles. 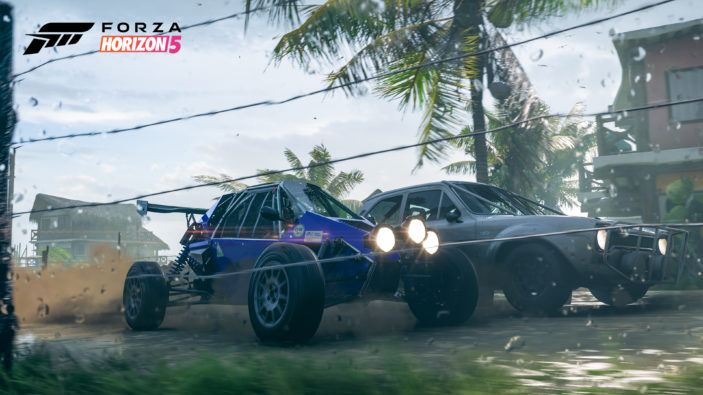 Forza Horizon 5 breaks up its time between Adventures, Tours and Arcade Events. Adventures are the main focus. Aside from the initial Festival which takes place during the tutorial, you’ll get the chance to venture over to 5 other Horizon Festivals, each based around various types of street racing. From the Apex road racing, Wilds drift racing, Baja cross-country racing, Rush PR stuns and Street Scene street racing, there’s honestly something for everyone. They’re also packed with certain objectives that you must complete during your time within that festival, from chasing down exotic animals, to taking photos of iconic landmarks.

Forza Horizon Tours are a more relaxed way to to take part in long winded cross-country races with others. While these modes are subject to playing with others, Forza Link, an AI based matchmaking system provides a convenient way to help link up with friends. You’ll also get the chance to hit up various Forza Arcade events scattered about the map. These public events provide short and sharp bursts of whacky fun, as you complete numerous objectives such as destroying piñatas or aiming for strikes by knocking down bowling pins. Between the various general events and longer championships you will take part in, the grander sense of scale and brevity is not lost on the driver. You can tackle each of these as you see fit, and in any order. Progression is based solely upon your motivation to participate and compete in anything that tickles your fancy.

Your Car, Your Way

Packing in over 600 vehicles to choose from is a wonder to behold. From high-spec performance cars, to SUV’s and JDM classics, I’m sure that your favourite vehicle is hiding in Forza Horizon 5’s massive offering.  While any car you like can tackle any type of terrain and race, customisation has also received a generous boost, the scale of which the Forza Horizon franchise has never seen. You’ll be able to kit out your car with various new body kits and performance upgrades. 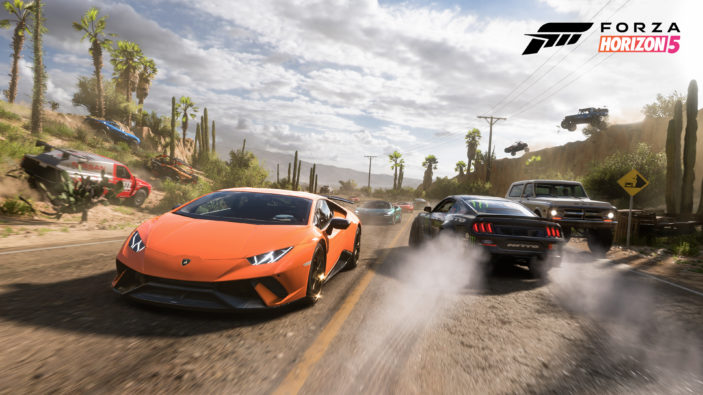 Customisation has always been relatively straightforward, and thankfully given the new amount of depth, just as easily accessible. Building your favourite vehicle for a particular terrain is as easy as picking the parts associated with it. Your Skyline R34 can now be treated to a bunch of rally differentials, tyres and transmissions. You’ll always have the ability to tune your car and alter these details, but this linear form of customisation is super friendly for those that just want to take their favourite vehicles to each and every race. While I would prioritise Forza Horizon 5 as an arcade racer, there is still a considerable amount of depth on offer, should you look to get into the nitty gritty. Although, I wouldn’t be stacking this up to Forza Motorsport’s levels of both handling and weight.

Overall, Forza Horizon 5 is a winner from end to end. A gorgeous recreation of Mexico, super crisp and polished visuals, incredible and addictive driving mechanics, a wealth of customisation options and a truckload of races across various terrains all spell ‘essential’. The franchise still grips onto its arcade style roots and overall structure in terms of progression, but it never hinders the fact that Playground Games understands exactly what makes the franchise tick.

Forza Horizon 5 is the best the franchise has ever been, and a true staple of accessible arcade racing. Plus, if you have access to Xbox Game Pass, you’ll be able to play it at launch and quite frankly if you’re a racing fan, there’s no excuse.

Review conducted on Xbox One with a pre-release retail code provided by the publisher.