Review: All About Women at the Sydney Opera House will make you uncomfortable – and that’s a good thing 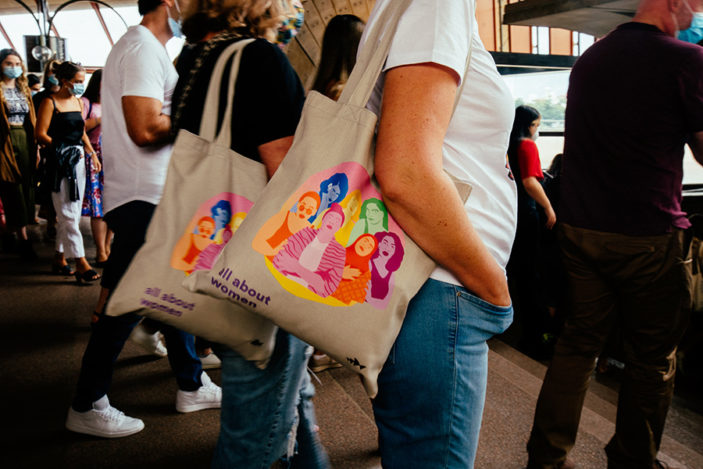 There has been a lot of discussion around International Women’s Day this year, with many expressing strong concerns the day has become tokenistic. Big corporations, largely still run by middle aged white men, throw a morning tea (often organised by the women in the office) and lament lyrically about the organisation’s commitment to inclusivity and gender parity. Then, after the women in the office have cleaned up the plates, the men pat themselves on the back for being ‘good feminists’, and everything continues as it was – nothing really changes.

In the same way that you shouldn’t need Valentines Day to tell someone you love them, we shouldn’t need International Women’s Day to suddenly remember the significant and valuable contribution women make to this world.

It was while questioning the role I play in this, and whether words are actually enough to bring about change, that I attended All About Women at the Sydney Opera House – a day full of words and wisdom from some of the most influential women of this generation. The topics were diverse, and, among other, touched on the ongoing dialogue around consent, issues of race and modern feminism, parenting with a disability, the future for women in Afghanistan, and Queerstories.

Grab yourself a coffee and try to get comfortable – because things won’t stay that way for long. 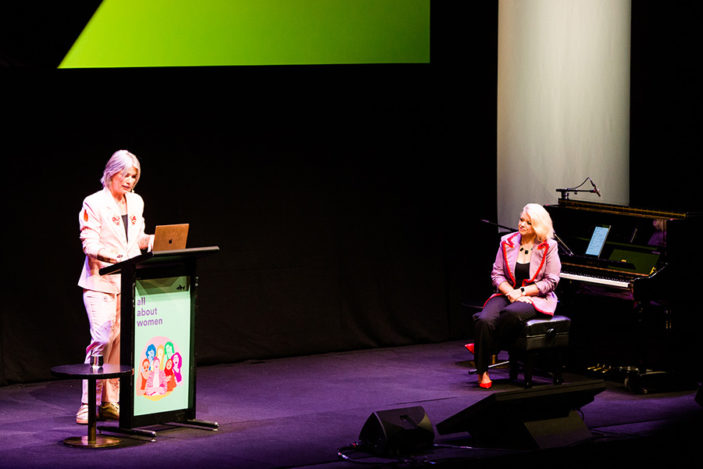 Presented as a literal sermon on love, Clementine Ford addressed our society’s predisposition to default to romantic love every time the word is mentioned. Indeed, when she asked the audience to raise their hand if they had ever been in love, then followed up by asking if we all assumed she meant romantic, sexual love, the response was fascinating. Although, is it any wonder when society and pop culture have taught us that this is the most important love that exists, that “the only way we can truly be happy is if someone picks us.”

It’s societally implied that if you’re single, you’re doing life ‘wrong’, and, as Ford recollected a story from her youth, where ‘you must be single’ was flung at her as an insult, I’d wager there wasn’t a woman in the room who hadn’t found herself in the same situation. This idea that only romantic love can make you truly happy is a construct of heterosexual patriarchy, initially conceived as a means to control women and maintain power. Now it’s held up as an ideal via rom-coms and Nicholas Sparks novels.

There are so many other types of love that are just as fulfilling and, I’d argue, have more longevity than romantic love. Why do we place less value on the love we have for our family or our friends?

Complete with musical numbers, Ford’s sermon was uplifting, heart warming and apparently exactly what I needed to hear in this moment. My biggest takeaway was when Ford said, “Love is more than being liked, it’s being known”. How many people truly know you? How much do you really know yourself? 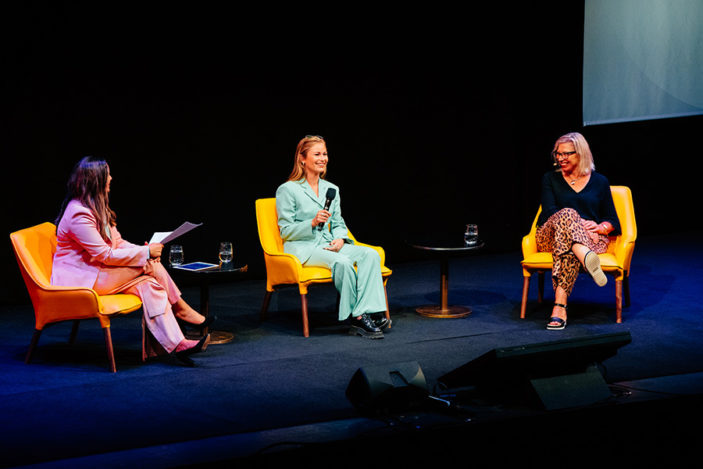 Both Rosie Batty and Grace Tame have been awarded Australian of the Year, and both women have received this award off the back of great trauma.

In 2014 Batty’s 11-year-old son Luke was murdered by his father. Since then she has been an advocate for change and continues to campaign against domestic and family violence. When Tame was 15 she was groomed and repeatedly sexually abused by her 58-year-old teacher. She continues to speak out and advocate for survivors of child sexual abuse, founding the Grace Tame Foundation in 2021.

Listening to these remarkable women talk so openly and candidly about their trauma was a humbling experience, and reflected a comment made by Tame when she said, “You can be strong and be vulnerable at the same time.”

There was vulnerability in Batty’s tears as she spoke about her son, and strength as she discussed the moment she realised she wanted to live and not let the bastard who took her son destroy her life. That balance emerged again as Tame opened up about her recent mental health struggles and the cycle of shame often felt by survivors, before shifting to how she held the media to account for the role they play in the depiction of sexual predators and victims.

Tame recalled a headline that appeared in the paper when she was still coming to terms with what had happened to her, where the media referred to the sexual abuse as an “affair”. Rarely, if ever, is the media held accountable for the impactful role they play in the portrayal of rapists and paedophiles. Is it any wonder that there is an overarching ‘boys will be boys’ attitude to abuse and violence against women when most of the Australian media is controlled by men? Tame’s anger was mesmerising, empowering, and wholly and completely justified.

It was an immense privilege to be in this room with these women. 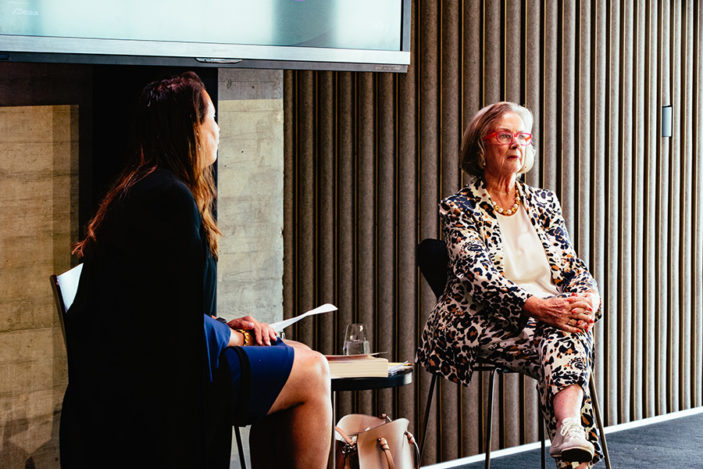 While we focus so intently on the future and everything we still need to achieve to gain gender equality, it is easy to forget everything that has been achieved and how far we’ve come.

Wendy McCarthy has worked for reform across education, family planning, human rights, public health, among others, and is widely considered a trailblazer for women’s rights. She believes the two biggest issues which stand between women and equality are education and health, although she does concede that if her generation was at 0% equality, we’re at about 70% now – but 70% is still not good enough.

She questioned how Australia could be considered number 1 in the world for women’s education, yet sit at 50 for gender parity. Is the answer perhaps more women in political leadership positions? If the majority of voices making decisions about this country are male than how will things ever change?

It was shocking to hear stories from McCarthy’s own life, of the time she couldn’t get a bank loan without a man’s signature, of the time she had to have her husband’s permission to have her tubes tied – it’s these recollections which remind younger generations of feminists how far we’ve come and instils a sense of gratitude to women like McCarthy for not giving up.

So what is her advice for young women today? Value yourself and stare down people who seek to limit you and always trust your gut. 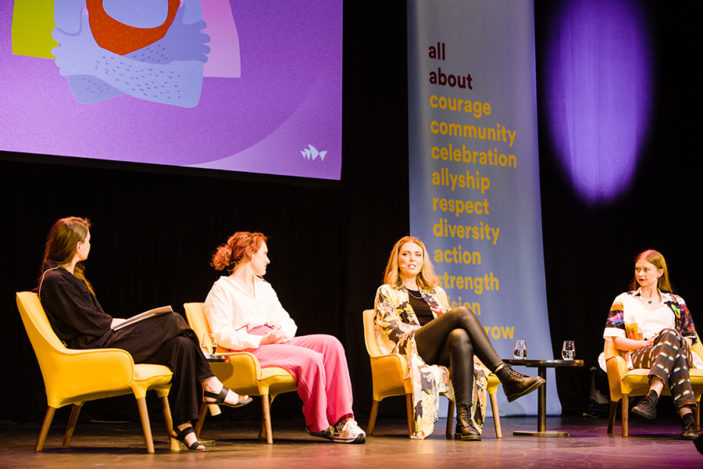 Bri Lee, Amy Thunig and Saxon Mullins are agents for change. Lee heads into schools and educates young people about consent; Thunig is an academic and an educator; Mullins is the force behind the NSW Government Affirmative Consent Bill.

The conversation examined the legislation around consent in NSW, bearing in mind it is different for each state, and how we tackle what is one of the biggest issues in this country. Lee discussed how schools invite her to talk to year 11 and 12 students, and in one instance she spoke with the girls only while the boys were in a separate room learning about finances. The irony. She makes the valid point that by the time students are in year 11 and 12 it is too late to have conversations about consent. Most are already sexually active, and some have already experienced non-consensual situations.

The panel were positive about the introduction of mandatory consent education in schools but all agreed this is just the first step – the implementation is the hard part. There is no script for what consent looks like – in pop culture it is rarely, if ever, presented. But consent doesn’t have to be awkward or a big deal – it can be as simple as asking the person you are with “Can I kiss you?”, “Do you want to have sex?”, “Are you ok if I hug you?”.

And remember if it isn’t an enthusiastic yes, it’s a no. Silence is not consent. Consent can be retracted at any time if the person changes their mind or becomes uncomfortable.

These women have done and continue to make amazing strides in this space, but, as Thunig said, “We are up against tradition, not best practice.” 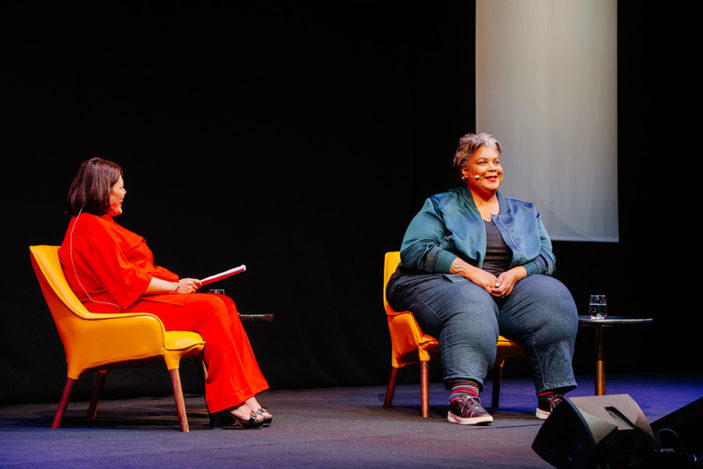 Roxane Gay is perhaps best known for her New York Times best-selling essay collection, Bad Feminist, and today she spoke with Nakkiah Lui about her life, her loves and the challenges we still have to face in the pursuit for authentic equality.

There is an inherent problem with modern day feminism and it is a problem that has existed since the Suffragettes. Women of colour, women with disabilities and marginalised women are still hovering on the periphery of the conversation. This can be seen in how society views a black woman’s anger as opposed to a white woman’s. One is labelled hysterical and crazy, the other is heard and often listened to. But as Gay points out, anytime you leave someone behind, feminism fails. Feminism has to incorporate activism against racism – we are all women.

When Gay discussed her recent marriage to her partner Debbie Millman, she touched on this idea of validation. In our social media saturated world, it seems as if everyone is constantly seeking validation of some kind – of their appearance, their opinions, their struggles – and this is often painted as a negative thing. Particularly if you identify as a feminist you are led to believe that validation of the physical is akin to objectification, but Gay does not agree. She laments that validation can come from a place of appreciation, not objectification, and wanting this validation doesn’t make you any less a feminist – it makes you human.

Some key takeaways: what you’re saying can’t be relatable for everyone and if what you’re saying does appeal to everyone, then you’re not saying anything of value. Sometimes people have to get uncomfortable to bring about change – “revolution is never polite”.

I’ll be the first to admit that some of the conversations today made me uncomfortable. They made me check my privilege and hold myself accountable to my inaction. As I looked around the room it was clear where the gaps reside in this current wave of feminism. The majority of the room were white women, one could assume privileged white women as they could afford to attend the talks, and it really solidified everything Gay was saying. And, as always, there were painfully few men present.

Perhaps it’s a completely unrealistic dream for me to hope that one day, that room will be 50/50. It’s called All About Women, not Only For Women, and time and time again we keep saying that we can’t do this alone. We need allies. We need men to stand beside us and raise their voices with ours. How will men ever truly understand the fight if they don’t hear the stories? We need men to get uncomfortable.

Now in its tenth year, All About Women continues to inspire, to empower and to give women a voice. As Ford said, to be loved is to be known, and we know these women. We are these women. And knowing you are not alone in this fight is the greatest gift you’ll ever receive.

For more information head to the Sydney Opera House website.