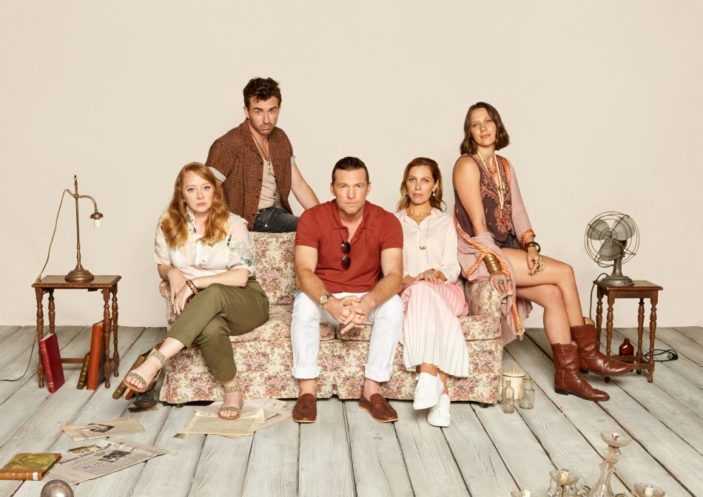 Ever notice how families will remember events from their childhood differently? How a conversation, a situation or a person that seems so clear to you can be viewed from a completely different perspective by your sibling.

This concept of selective memory is sometimes heightened after someone dies, our brains often choosing to focus on the positive because why would you want to dwell in the negative? It’s this idea of perception and internalised conflict that forms the foundations of Appropriate at the Sydney Theatre Company.

Written by American playwright Branden Jacobs-Jenkins, the play centres around the Lafayette siblings who have returned to the family plantation in Arkansas to rifle through their late father’s belongings and prepare the house for auction. There’s Toni (Mandy McElhinney), the eldest, who harbours deep resentment towards her younger brothers, Bo (Sam Worthington), a seemingly successful businessman from New York who appears to be there for the money and Franz (Johnny Carr) (also known as Frank) who has returned home to make amends for a past he’d rather forget. They are joined by Toni’s troubled son Rhys (James Fraser), Bo’s wife Rachael (Lucy Bell) and two children Cassidy (Ella Jacob) and Ainsley (Robbi Morgan) and Franz’s vegan cooking, sage burning girlfriend River (Brenna Harding).

As the play unfolds and the characters delve deeper into their father’s possessions, a picture begins to form of the kind of man he was and this picture is heavily influenced by his children’s recollections. The discovery of a photo album throws the entire family into conflict and forces them to consider if their father was, not only racist but a willing participant in horrific acts of racist violence.

Despite having known their father the longest, it is Toni who is the most resistant to the revelations, arguing their father was an educated man – a lawyer – he wasn’t some redneck hick. It is here that Appropriate beautifully highlights socially constructed, preconceived ideas of what constitutes a racist. It is not always the uneducated, redneck hick – or the country bogan – racist ideas infiltrate every level of society.

When the album is discovered by Rachael she is horrified, insisting Bo get rid of it before the children see it and are traumatised. Inevitably the teenage Cassidy does see the images but her reaction is decidedly different from her mothers. There’s a curiosity there but also a level of desensitisation, so much so that she takes a photo of it for her Instagram.

This incredibly clever juxtaposition of generational views calls into question how these historical atrocities are being communicated to the next generation, if at all. Are Bo and Rachael really protecting their children or simply avoiding an uncomfortable conversation that highlights their own white guilt and in turn, creating a generation of indifference?

Expertly directed by Wesley Enoch, Appropriate is a deeply layered production that is both subtle and overt in its commentary on racism. At one point Bo makes a passing comment to River about her Native American heritage. She is surprised by this and asks why he thinks she’s Native American. His response is telling when asks why she is dressed like that. It is then that we realise a blatant display of cultural appropriation has been in front of us the entire time and we barely noticed. Racism is not always obvious.

The entire cast is exceptional and the dynamic between the siblings is authentic and entirely believable. McElhinney delivers an incredibly raw and powerful performance as Toni, managing to elicit both frustration and sympathy from the audience. The beauty of Worthington’s performance is in his physicality, as we see Bo literally shrink and curl his body into a ball during difficult conversations or jump and throw his limbs around when intensely angry.

Carr delivers one of the most moving and humorous monologues of the production in the second act. His earnestness and excitement are palpable as the others watch on in stunned silence. It is a sight to behold.

The set design is amazing and the old plantation is as much a character in the production as any of the actors. There is nothing presented without purpose or reason and the cast manage to utilise the entire stage in a way that is not forced and appears completely natural.

I’m reticent to give too much away, but there were moments throughout Appropriate that made me catch my breath and the questions it raises are uncomfortable and hard. How would the audience have responded had the story been set in Australia? How would we have felt had we been asked to examine our own country’s violent and shameful past? Would we have laughed so easily had the finger been pointed at us?

And this right here is why Appropriate is a truly remarkable and intensely relevant piece of theatre that is not to be missed.

Appropriate will play at the Roslyn Packer Theatre (Sydney Theatre Company) from the 15th March – 10 April 2021. For more information check out the website.