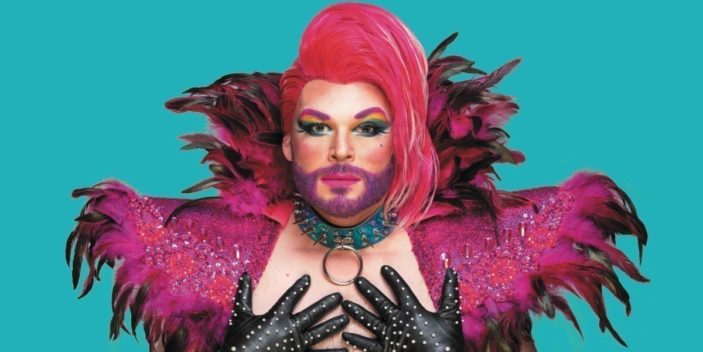 My closing memory of Yas Queen is a rousing rendition of Queen’s “Somebody to Love” with the audience standing and cheering a stunning performance. The journey along the way was a roller coaster ride of emotion.

The opening number was also strong, but a number of factors threatened to derail the show. There was the sound bleed from a nearby tent; sometimes it unwittingly added to the performance, sometimes it distracted. But it was there. A long drive from Melbourne after an extended COVID isolation would test anyone. Add opening night nerves, and it’s a credit to Yas Queen that she battled through these issues and pushed harder to entertain.

The songs are full showgirl, some Whitney, some Aretha and a song about her dentist. Who knew that a dentist could fill a cavity so well, and so often? Apparently so. This Kiwi import has a strong, golden voice that is even better than the advertised “Leather Lungs”. The ability to dance on the black stiletto leather boots and the flexibility in the aforementioned dentist’s chair was truly inspirational.

The outfit is all sequins and pearls, probably too brief and tight for your prude auntie. But just right for the appreciative COVID-distanced crowd. (note: a full house takes some time to seat in a socially distanced way – come early). What the spartan stage lacks in interest is made up for by the larger-than-life award winner from last year’s Fringe. With the vocal range of Prince and Freddy Mercury, Yas Queen had the crowd singing along.

The show really took hold after her poignant story of poor love choices, rape, and HIV. From this moment onward the Queen really started to shine. Her confidence and energy climbed to a crescendo. The audience were enthralled.

Leather Lungs by Yas Queen is a show that gives hope and leaves you feeling good no matter what past trauma you may be recovering from.

The reviewer attended the performance on March 9th