Adelaide Fringe Review: Rouge is a fun and sexy celebration 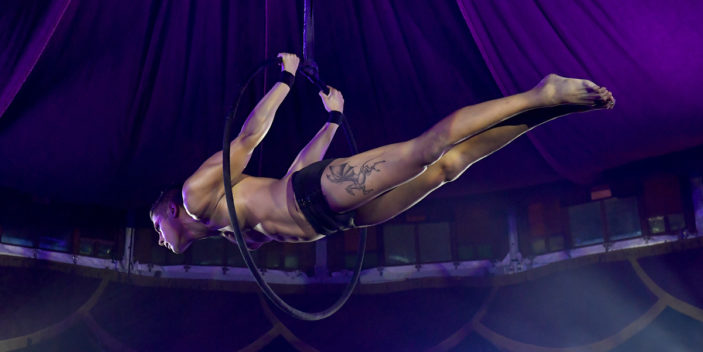 There was a good crowd in the Magic Mirror Spiegeltent for the final weekend performance of Rouge. Despite the increasing talk of COVID-19 in the press, audiences remained undaunted and expectant. The tent has a circular stage in the centre, with good views all round. The high fabric and glass covered walls gave the space a carnival feel.

The show opened with the cheeky MC amidst the crowd, running through a few rules of the show. Which seemed to mainly consist of clapping a lot and not taking photos of the performers when they’re naked.

Opening the show was a songstress in red singing a haunting aria whilst two acrobats perform with incredible dexterity and skill. That introduction set the tone of the complete show, with various levels of strip tease, high wire, feathers, sequins and boas. The costumes are glamorous and figure hugging. Although the occasional high heeled leather boots are probably not that easy to wear when doing acrobatics.

The show is a combination of sensuality and strength. Bad girls and bad boys. It is flirtatious and humorous all in one. A lonely girl wearing a lampshade and rolling a hoop is way funnier than it sounds on paper. Each skit rolls seamlessly into the next; props are placed as part of the routine. Nothing is left to chance and the performers make it all seem so effortless. Fire breathing acts follow seamlessly from high wire acrobatics.

Themes of love, sex, romance, and more are all part of the show. Shimmering and sequinned costumes are changed in the blink of an eye. The Cyr wheel is put to good use with a love story being played out in and around it. A whip cracking dominatrix, wearing a carrot for a penis ordering four scantily clad unicorns around, is another skit that needs to be seen to be believed. If you feel that this type of thing would offend you then this is not the show for you. However, for the audience at the show, this was hilarious and had the whole tent in stitches.

Rouge is a fun, sexy, fast-paced show that is part acrobatic, almost burlesque, and definitely entertaining.

The reviewer attended the 2pm session on 14th March. Fringe Festival is now finished for the 2020 season but more information on the Fringe can be found HERE.