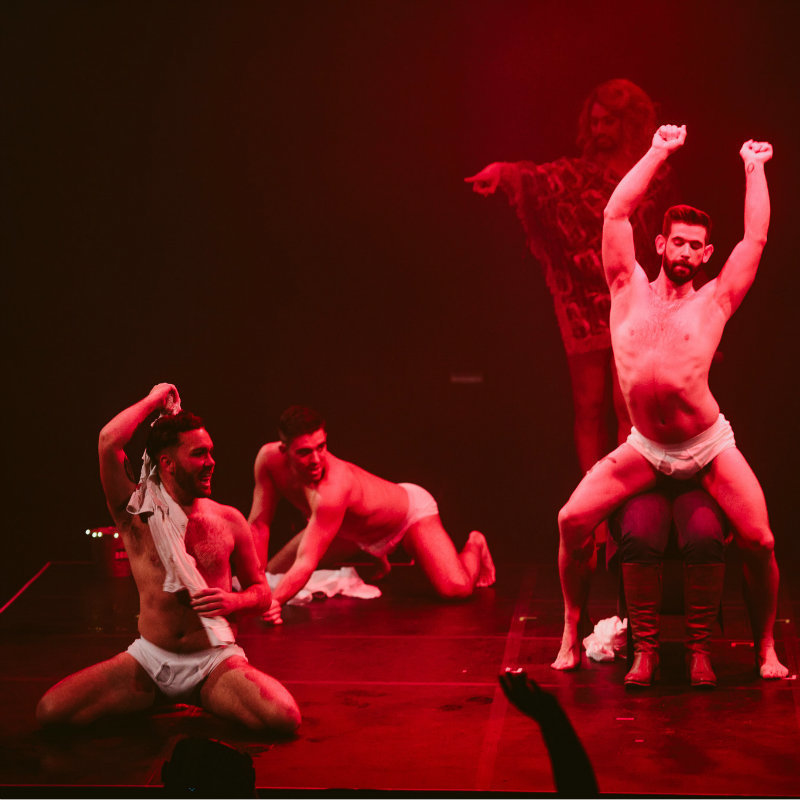 The Adelaide Fringe is over for another successful year and Club Briefs was the perfect way to celebrate the final evening. The Briefs Factory is an Australian creative collective who “manufacture, cultivate and present evocative, irreverent, physical performance”.

Our MC for the night is Shivannah, who is sassy, loud and irreverent. Her costume changes between each act are eye catching and outrageous and mostly come with a back story. The MC is a crucial part of creating and sustaining the energy of the audience and Shivannah is a seasoned professional who knows how to milk every last drop from the crowd.

First act opens strongly with a white g-string clad athlete who does hand stands on blocks, leaps and bounds with great skill and expertise. Clearly this show is about glitz, glamour and plenty of flesh. The performance is polished, sensual and entertaining.

Next up is Broome ex-pat, Louis Briggs, who does a reverse strip tease while eating a lollipop and solving a Rubiks cube. Briggs is definitely a crowd favorite and easily ups the eye-candy ratio.

The Club Briefs Factory has a dedicated following, as the banter between MC Shivannah and the crowd was familiar and expected. For those first time attendees, there was also a chance to “be in the club” with some secret moves. Club Briefs is an inclusive space and audience participation is an essential part of the show.

The show is fast paced, funny and very non-PC with plenty of flashes of skin. But this is not a totally male revue, with a blonde bombshell strip tease that includes a surprise ending that has the audience in stitches.

Adelaide songstress Carla Lippis was a popular addition to the lineup, and was equally sassy and bold as she presented two songs including an heartfelt rendition of “Bang Bang (My Baby Shot Me Down)”.

All too soon the show had to come to an end, but not before Thomas Worrall exhibited his superb skills on the hoop, with nods to “Frozen”, Britney Spears and more. The final few seconds of his act were breathtaking.

With record sales for the Fringe overall and also for the relocated RCC in the Adelaide University, finishing the month long event with a party show like this was the perfect way to finish. The party continued on the Math’s Lawns with Dusk till Dawn playing all the party tunes.

If you missed Club Briefs then I wouldn’t be surprised if you were simply “jealousss”.