TV Review: Amazon Prime Video’s Upload is a thought-provoking comedy on the realities of the afterlife 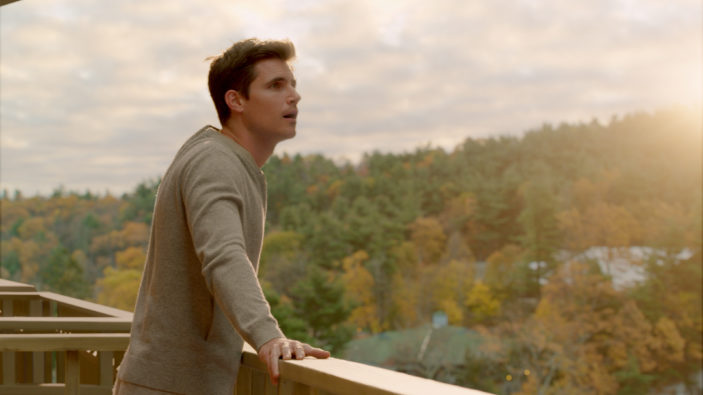 As easy as it is to compare Upload to a program such as The Good Place – given that both series’ deal with the afterlife – Greg Daniels‘ romantic-comedy-cum-mystery is more a commentary on capitalism, a topic it tackles as successfully as it does ineffectually.

Set in the not-too distant future (2033, to be exact), Upload details a world where technology has advanced considerably to the point that your consciousness can be uploaded to a digital afterlife (an advanced iCloud, if you will) where you can live out your best life in death; or, more correctly, the best life that your finances and data plan affords you.

Someone in the midst of an upload is Nathan (Robbie Amell), a computer programmer currently grinding to sell his latest idea.  On the brink of death following a suspicious car accident, Nathan is offered the chance to be uploaded to the glitzy afterlife sector known as Lakeview, a resort-style existence that he can only afford off the generosity (or is it?) of his vapid, but disgustingly wealthy girlfriend Ingrid (Allegra Edwards).

It doesn’t take long for Nathan to uncover the highs and lows of his new virtual existence; the joys of easily accessible maple bacon donuts offsetting the frustration of in-app purchases and specifically-targeted advertising – it’s all terribly familiar, isn’t it?  Additionally, Nathan’s own memory of his life on Earth has been seriously altered, and the suggestion that his car accident wasn’t remotely organic plays out as a major factor of the show’s narrative.

Under normal circumstances, a television series would get enough mileage out of that plot point alone, but Daniels utilises his 10 episodes to their fullest capacity, adopting a romantic comedy temperament too, an identity additive that often emerges as Upload‘s most appealing aspect.  This is particularly assisted due to the fact that Nathan’s emerging connection with his guardian “angel” Nora (musician Andy Allo) – essentially a customer service rep for the afterlife company – is so beautifully realised.

Amell’s attractive aesthetics are pushed constantly throughout the show – it’s made no secret that everyone finds him quite physically appealing – and whilst it would’ve been easy for his character to rest solely on that, Amell has fun with his vanity, which in turn endears him to us as an audience.  As much as he’s the connecting factor for a large portion of Upload‘s story though, it’s Allo as Nora that commands the audience’s attention; her side-arc regarding her wishes so that her father will consider a virtual afterlife rather than risking the uncertainty of a traditional heaven is its own emotionally-charged, series-worthy subject in itself.

Though Upload is a fantastical series, and adheres to enough situational comedy set-pieces to deem it an enjoyable piece of entertainment (pessimistic it may be compared to something like The Good Place), the type of affordable-afterlife it suggests is more in tune with the state of the world and what would be offered, which in turn makes the series a little more thought-provoking than one may expect.

Upload is available to stream now on Amazon Prime Video.