Tribeca Film Festival Review: God’s Waiting Room is alluring as it is ugly 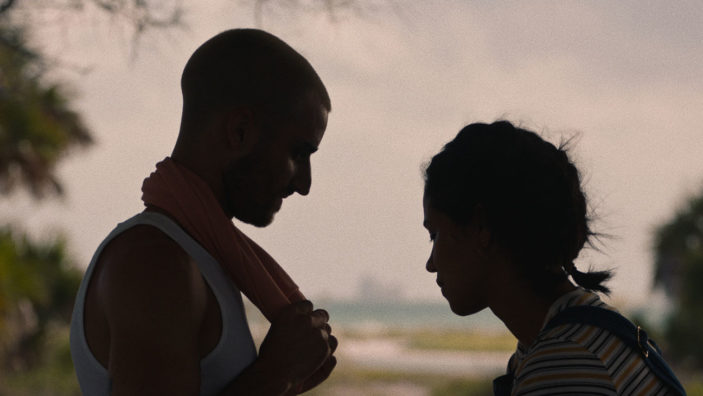 There’s some magnetic performances and a dirty immersion to God’s Waiting Room that, at times, are strong enough for the film to overcome its narrative cliches and ultimate contrivance that put much of its good work at risk.

As easy as it is to roll your eyes at the outline of the film being that three Tampa dwellers see their lives violently interconnect, writer/director Tyler Riggs knows how to create tension and to have faith in his performances, especially leads Nisalda Gonzalez and Matthew Leone as the virginal Rosie and Jules, the hustler that seduces her.

Much like the imagery present in such similarly-packaged films as Moonlight, The Florida Project and Waves, God’s Waiting Room has a vibrant yet ugly sheen to its canvas that mirrors the passion and the brutality that Riggs’ story houses.  It’s almost a stereotype at this point, but as familiar as this neo-realistic approach is, the story holds its own mood and feels like it’s own distinct project.  Similarly, there’s nothing particularly new in the good-girl-meets-bad-boy narrative at hand, but the vulnerability of Gonzalez and Leone’s nuanced performance means it too overcomes its awareness.

The sensuality between Rosie and Jules is palpable as he wins her over, despite her rebuffing.  He’s undeniably charming, but there’s a predatory streak to him that’s at once frightening and depressing as it’s clear he’s a character yearning for the genuine connection he’s so often been denied.  Their relationship, as well as the influence of Rosie’s loving but stern father (Ray Benitez), would’ve been enough for Riggs to lay his focus on and kept God’s Waiting Room as a contained, at times haunting drama.

Where God’s Waiting Room muddles its story is with the inclusion of Riggs himself, the filmmaker starring as Brandon, a recovering criminal whose own storyline doesn’t feel in tune with pathway of Rosie and Jules.  His separation throughout only makes the choice to collide his narrative with theirs in the final act all the more disjointed, tainting this quiet, building drama with a violence that feels like the result of vanity-fanning rather than constructive storytelling.  Riggs has an unpredictability to him that suggests his character is worthy of his own story – the sexual advances of his employer that trigger his PTSD suggest an extended history of pleasure and pain being regularly converged – but these small doses of dramatic segments take away from the main narrative’s intent of expressing Rosie’s emancipation from the dominating male presences in her life.

Clearly framing its Florida location as a sort-of purgatory with its tongue-in-cheek title, God’s Waiting Room indeed laces its could-be paradise with a sobering dejection; the beautiful, complicated performances are let down by disjointed proceedings and the trust to be had in the lush visuals to speak for themselves are undone by unnecessary voice-overs.  The ugliness is never far from the allure, much like the main story component of Rosie and Jules that deserved to be told free from Riggs’ ego.

God’s Waiting Room is screening as part of this year’s Tribeca Film Festival, which is being presented both virtually and physically between June 9th – 20th, 2021.  For more information head to the official Tribeca page.