Triangle of Sadness is a wicked and subtlety-free satire that takes aim at the wealthy: Brisbane International Film Festival Review 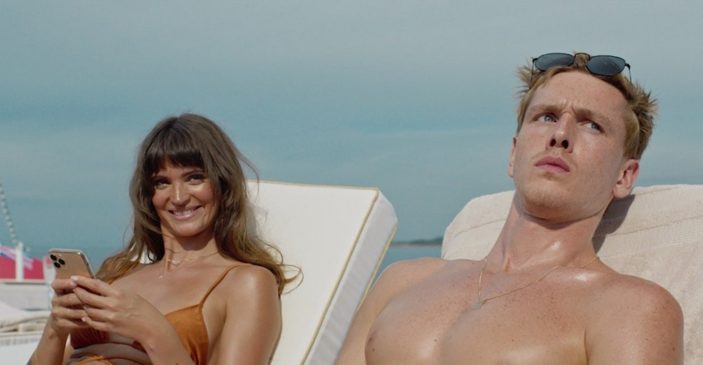 The rich eat, but then suffer mercilessly in Ruben Östlund’s Triangle of Sadness, a wicked, at-times horrifically and humorously gross, satire that takes aim at the wealthy in a manner that is deliciously void of any subtlety.

Divided into three chapters – all linked by a young, glamorous couple – the film promises one observation before skewering to another (and another), honing no sympathy for its uber wealthy players, but alarmingly lacing them with a certain depth.  Said young couple are fashion models Carl (Harris Dickinson) and Yaya (Charlbi Dean, who tragically passed away only several months ago; her magnetic, star-making performance now shrouded in undeniable sadness).

The film initially has fun with the notion of gender roles and modern manners as the duo squabble over who will pay for a bill after dinner.  It’s the type of conversation that we all (unfortunately) have either had a variation of, or, at the very least, thought about having, when it comes to who should pay and why, in their case, that he should automatically pay despite her wealth; “I make more money than you”, she so casually reminds him, not remotely helping the situation at hand.

Observations such as this – as well as a particularly humorous gag where Carl is unable to decipher which light switch is which in a hotel room (I think we’ve all had this problem) – helps Östlund’s exaggerated comedy earn a certain reality, a state of being that floats further and further away as the film shifts locations.  The second chapter of Triangle of Sadness (a reference to the term plastic surgeons use when describing the “worry wrinkle” between the eyebrows) moves the couple to a luxury yacht; Carl tagging along as Yaya’s plus one as she soaks in the benefits of being an “influencer”, earning a free invite due to her mass following.  It’s here that the film spends the majority of its time, introducing us to an array of reality-detached millionaires (maybe even billionaires) that have every intention of tipping the scales in their favour before Östlund proves otherwise.

Skippered by a drunk, philosophical captain (Woody Harrelson, having an absolute whale of a time), the upstairs/downstairs mentality that Triangle of Sadness initially adheres to makes it clear that every guest request will be met with a resounding “Yes” – Vicki Berlin‘s Paula, the head of staff, reminding the crew that no matter what they are asked for (whether it’s “illegal substances” or “a unicorn”), they agree – which situationally leads to their own downfall.

Through a tide of rough outside waters and neglected food, a wave of seasickness rocks the passengers during the Captain’s Dinner, resulting in what is sure to be the film’s most discussed sequence – an extended set piece of Monty Python-esque toilet humour that sees bodily fluids from all ends engulf those on board.  It’s a vile, but no-less hilarious set-up that leads to the film’s final chapter (“The Island”), where those that made it out alive are marooned on a nearby island following a surprise pirate attack.

In an environment where their wealth now means nothing in terms of survival, Triangle of Sadness could have enjoyed itself in letting the survivors (including Carl and Yaya) fend for themselves, possibly descending into a Lord of the Flies-type narrative that, honestly, would have felt organic to Östlund’s mean streak.  Instead, he honours “the help”, showcasing the glorious Dolly de Leon as Abigail, a Filipino cleaner who asserts her dominance as the only one capable of making a fire and catching fish.  She subverts the social order in one foul swoop, and the film is all the better for it.

Whilst Triangle of Sadness doesn’t exactly express its commentary in a quick fashion – the film clocks in at 147 minutes – its examinational humour never loses any of its bite throughout.  It isn’t looking for you to sympathise with its characters either, but they remain constantly watchable in spite of them being (mostly) unlikeable.  Throughout it all it’s Carl and Yaya that keep us as an audience invested, and their gradual change of power speaks to Östlund’s grand construction and the prowess of both Dickinson and Dean; the film’s closing minutes, ambiguous as they are, cementing their true reversal, with his ultimate insecurity and her assurance emerging in an open ending that will be just as discussed as the yacht centrepiece that this film hopefully won’t be merely reduced to.

Triangle of Sadness is screening as part of this year’s Brisbane International Film Festival, running between October 27th and November 6th, 2022.  For more information head to the official BIFF website. The film is scheduled for an Australian theatrical release on December 26th, 2022.