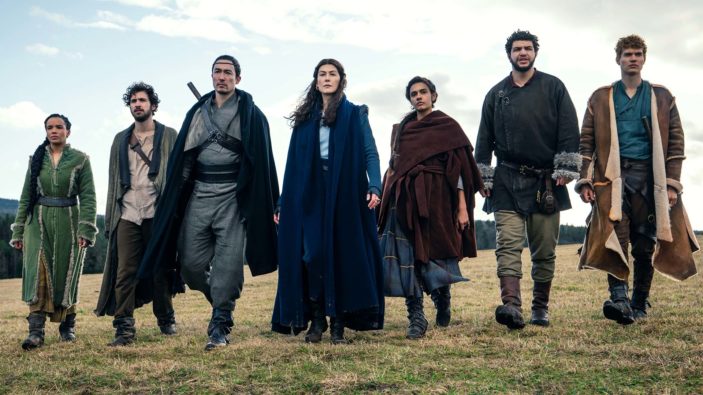 The last episode of The Wheel of Time season one was released on the 24th of December, capping off the agonisingly slow weekly wait (who decided to re-introduce that?) for new episodes of the epic fantasy series. For the uninitiated, the show is based on the well-known novels by Robert Jordan – although fans of the books should be warned that showrunner Rafe Judkins takes multiple departures from the source material in order to transfer the story into a TV-friendly format.

Our ‘first impressions’ review covered the first three episodes, where we met the ensemble cast of characters and the magic-channeling Aes Sedai Moiraine Damodred (Rosamund Pike), who explained that one of the five would be the ‘Dragon Reborn’ – someone who would either save the world from the ‘Dark One’ or help them destroy it.

The series took a couple of episodes to find its feet and comparisons to the Lord of the Rings were rife as the more subtle parts of the world were still emerging. However, by the middle of the season the intricacies of the plot had revealed themselves, creating an enthralling universe with layered characterisation.

A moving mid-season funeral scene gave the opportunity to delve into the complex relationship between Aes Sedai and their Warders – which was a vital part of the book series – and highlighted the strong performance of Daniel Henney as Lan, Moiraine’s stoic companion. Also, the ‘false dragon’ storyline in episode four provided some much-needed context as to why men are not allowed to channel (use magic).

Although it was important for world building, these scenes did mean that a significant amount of time was spent on Moiraine and Lan, and the five younger characters had less time to develop. Marcus Rutherford’s Perrin still made an impact, especially during the scene where he was being tortured by the sadistic (and brilliantly portrayed) ‘White Cloak’ Eamon Valda (Abdul Salis).

The last few episodes all began with flashback scenes, and these were some of the best moments in the series, particularly the one in episode seven where a woman is in labour on a snowy mountainside and brutally defends herself from a continual stream of attackers. Another was set 3000 years in the past, and gave some essential backstory about the Dragon, while showing an idyllic, futuristic Tar Valon, as it was before the Breaking of the World.

The last battle of the season was a bit underwhelming, apart from the chilling dream sequences where the Dark One tries to trick and seduce the Dragon. However, the ending was also punctuated with meaningful moments, such as the steely Lady Amalisa (Sandra Yi Sencindiver) declaring that she wouldn’t let her city fall and Moiraine’s emotional reunion with Lan.

The Wheel of Time is visually impressive, with detailed sets and believable costume designs, and the complex world of the books is communicated clearly – without an overdose of exposition. Season two is already filming, and it’s a good thing too, as there was plenty of intrigue left for the next instalment.

All eight episodes of The Wheel of Time season one are now streaming exclusively on Amazon Prime Video.