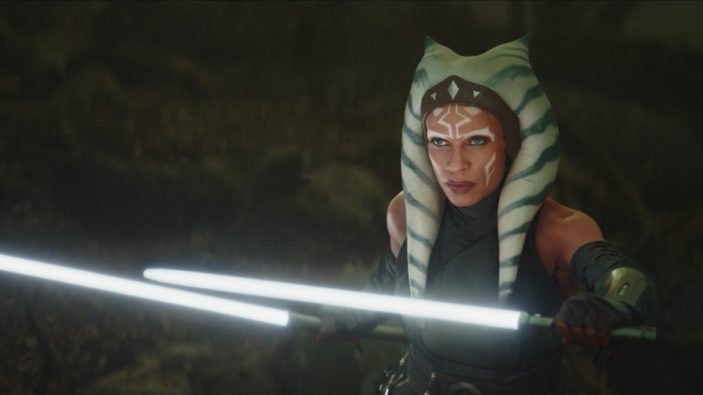 The latest episode of The Mandalorian sees creator / writer / director Dave Filoni not only get to bring a treasured animated character from 2D into live action 3D but simultaneously cement himself as a creative force to be reckoned with.

Spoilers ahead with our episode review.

Mando (Pedro Pascal) and the Child have finally arrived on the planet Corvus, to find much of the environment a wasteland. Upon arriving at the city of Calodan the villagers are fearful of punishment from the tyrannical magistrate Morgan Elsbeth (Diana Lee Inosanto), a woman who has clearly stripped the land of both life and hope.

Elsbeth sees the arrival of a Mandalorian bounty hunter in her favour, a jedi has plagued her and needs to be killed. Mando uses this opportunity to obtain the information he seeks, the whereabouts of Ahsoka Tano (Rosario Dawson). When Mando finds Ahsoka she reveals that the child has a name, Grogu, and that even though he wields the Force she is unwilling to take him and train him.

“The Jedi” opens with its revelation that yes, as many suspected, we would finally see Ahsoka Tano in this episode. This Ahsoka we are introduced to is fierce and fearless but there is also a sense of wisdom, and humility. She may have left the Jedi Order but her desire to want to help others in peril still drives her. From the quiet moments as she nods her head “listening” to Grogu share his memories.

To her reticence to train the child due to his fear and anger and that it might lead him down a dark path. To her mowing down the Magistrate’s cronies, as she ducks and weaves her way through the fog. Even if you haven’t seen her in the animated series of Clone Wars and Rebels her abilities as a warrior and her empathy to those around her are evident here, and Filoni’s script with Dawson’s performance fleshing her out beautifully.

The Mandalorian as a show has long been regarded as a space-western, but here the show leans even more into its love of samurai and Japanese cinematic influences. Filoni evokes the moody ambience with dusty washed out hues and colours. The stark settings of both the desolate stripped forests and the walled palatial garden. A giant brass bell used as a warning alarm.

The framing and silhouette of Ahsoka holding Grogu with a huge moon behind her. A climactic and dramatic duel between Ahsoka and Magistrate Elsbeth. The casting of renowned martial artist and stunt performer Inosanto in itself is genius too. The musical scoring in this episode by Ludwig Goransson is particularly evocative, along with the expressive sound effects and sound design.

Something else that is becoming more apparent as the show goes on, is Filoni and co-creator Jon Favreau’s desire to expand The Mandalorian universe by incorporating characters from other Star Wars media. The name-drop of Grand Admiral Thrawn in this episode hints at a possibility of the character showing up, along with that of Ezra Bridger, whose fate was unknown by the end of Rebels. We’ve already had Cobb Vanth (Timothy Olyphant) a character from the Aftermath book series cross paths with Mando.

There is also a theory that video game character Cal Kestis (mocapped by actor Cameron Monaghan) from Jedi: Fallen Order could be the one to assist Mando and Grogu. For the hardcore Star Wars fans this intertwining of characters offers a richness of cross-canon opportunities.

While there is a risk that having all of these excellent character cameos (along with great casting) may distract from the over-arching story of The Mandalorian, Filoni and Favreau never stray far from the focus. Din Djarin, the Mandalorian bounty hunter, and his small green charge Grogu (aka the Child, aka Baby Yoda) and their travels through the galaxy. Looking back on the episodes we’ve seen thus far, their adventures have seen them helping many along the way.

Some may say these feel like filler episodes but all of them add up to a patchwork quilt of seeing a much larger galaxy, full of so many interesting individuals. The literal universe building going on in this show is richly textured and a joy to watch.

Last week’s episode “The Siege” may have raised some questions, but at least this week we received some answers. Even if our hopes of having Ahsoka train the kid were thwarted, there is a good chance we may yet get to see her again. And for now Mando and Grogu are once again continuing their journey through space.

The Mandalorian is currently streaming every Friday 7:00pm (AEDST) on Disney+