The world of The Elder Scrolls Online continues to expand with its latest DLC chapter, Wolfhunter, which contains two brand new werewolf-themed dungeons: March of the Sacrifices and Moon Hunter Keep.

Wolfhunter launches alongside Update 19, which integrates a range of improvements and tweaks, including a new Battlegrounds map, Alliance War changes, and improvements to the werewolf skill line. This update is available for all players.

I had the pleasure of getting hands on with Wolfhunter this week, and found myself engrossed by its self-contained stories. Both March of the Sacrifices and Moon Hunter Keep feature distinct, separate stories following Hircine worshippers and werewolf hunters respectively.

The action takes place primarily in and around Valenwood, and without discovered waypoints, it can be a fair hike to discover their locations (and even longer if you forget you own a mount – please don’t ask me about it). Thankfully, Valenwood is gorgeous, and travelling through the woods for your wolf hunt is a mostly pleasant experience.

I tackled March of the Sacrifices first, which begins with one of the most terrifyingly gorgeous moments I’ve ever experienced in The Elder Scrolls Online, and gaming as a whole. 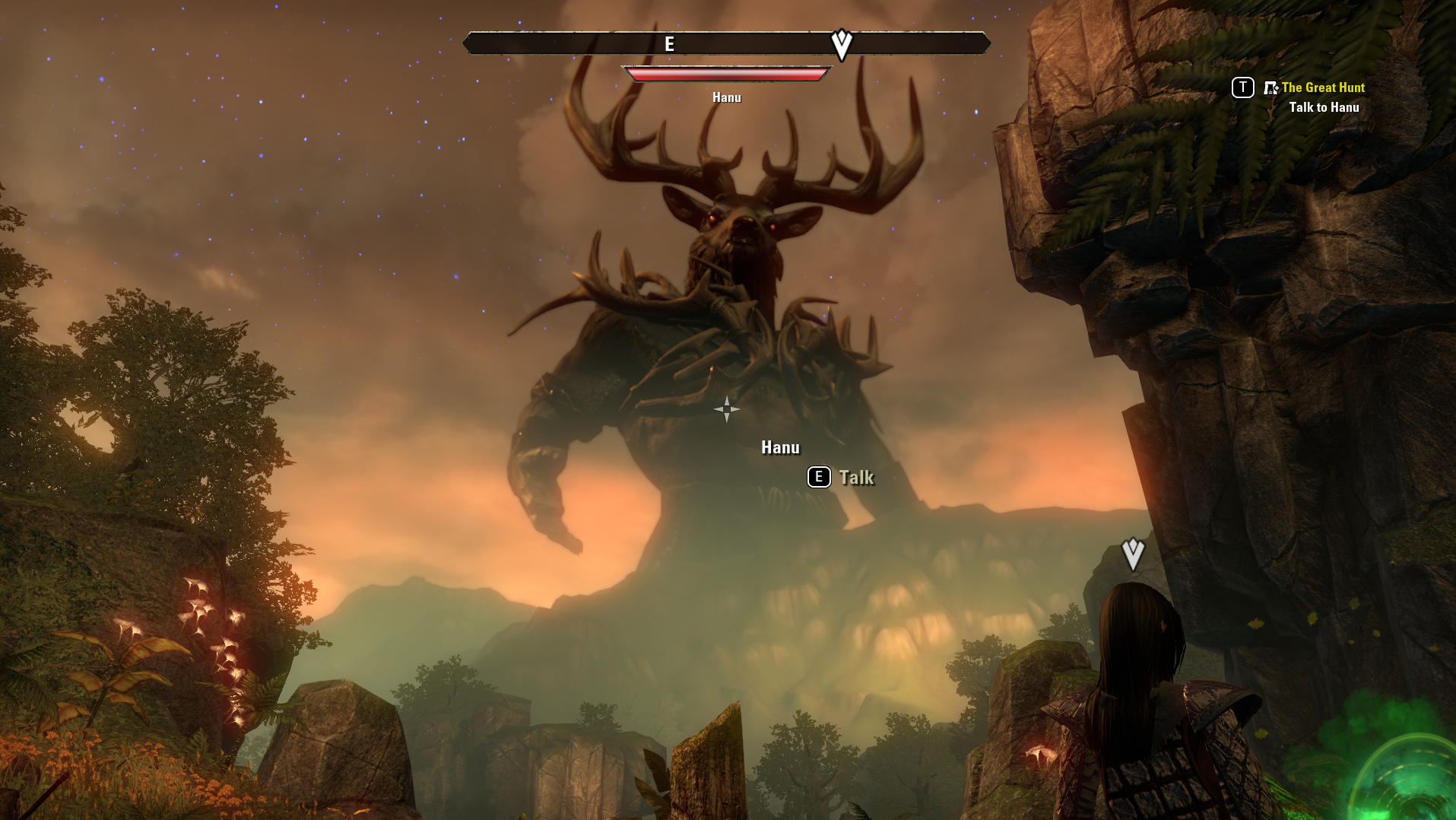 Look at that big boy. Phwoar. What an absolute unit. I was very afraid that I’d have to fight him, but it turns out I was actually vying for his favour. Hanu, an Ashlander, needed help to defeat Tarsyr, an indrik, in order to present its heart to Hircine, the Daedric Prince of the Hunt (big deer lad) and earn his boon.

With Hanu at your side, you descend into Bloodscent Pass – a valley that earns its name. I was severely underlevelled going into this quest, and died close to a dozen times along the way. Within the Pass, you’ll find hundreds of enemies and half a dozen bosses ranging from hard-to-kill to impossible-to-kill. Having said that, the scenery is gorgeous, so at least your many deaths will be memorable. 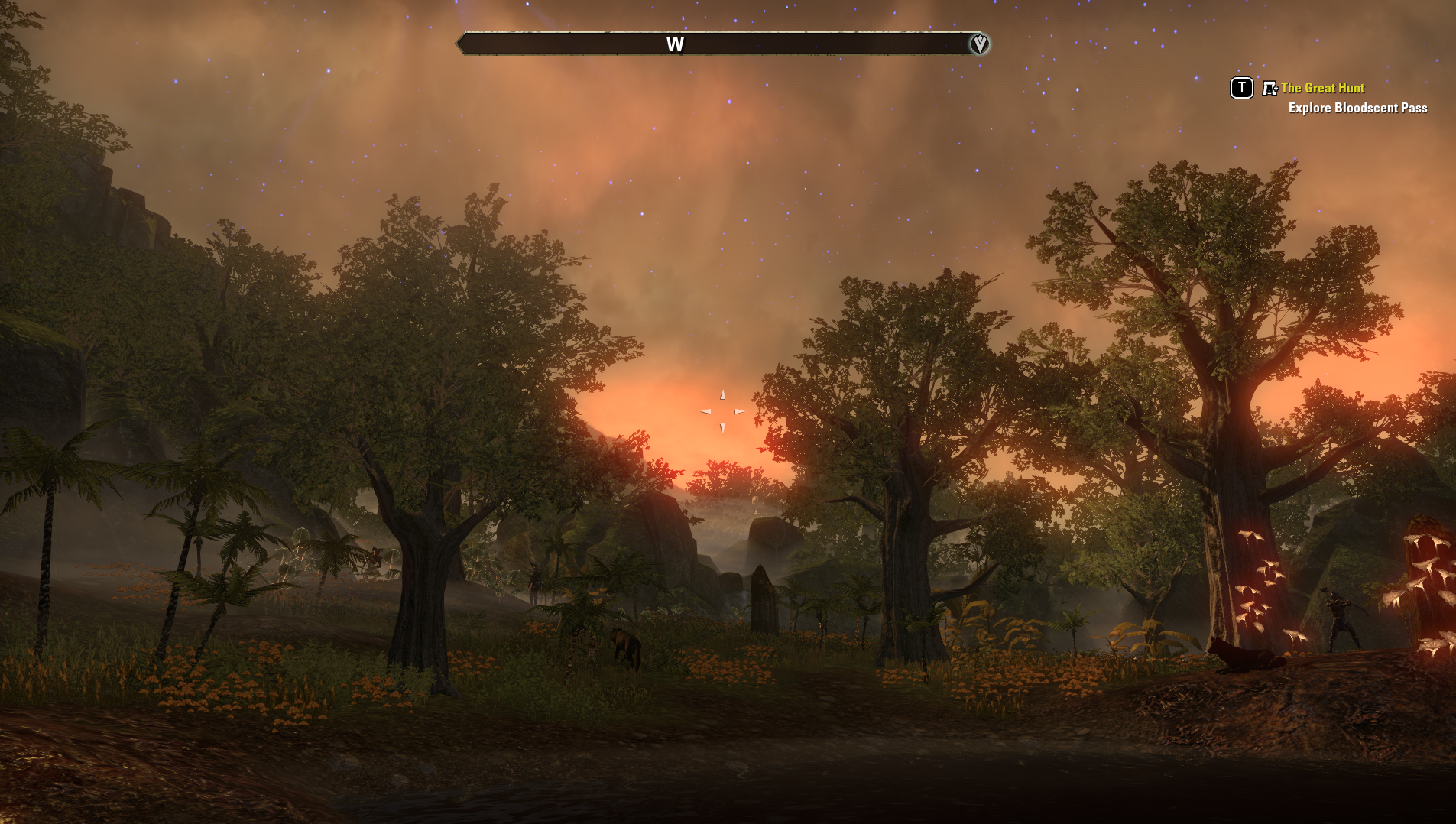 Having braved the Pass and run from danger with my tail between my legs, I then set about tackling Moon Hunter Keep, which was a definite change of pace. In this quest line, players are tasked with rescuing werewolf hunters, the Silver Dawn, from a pack of powerful werewolves.

Adonatus Varian is your contact for this quest – a handsome shirtless man who’s been captured by the werewolves, and is more than likely also a werewolf himself. Unfortunately, I didn’t live long enough to find out – the prison he’s being held in is filled with werewolf guards. You can probably guess what happened from there.

Overall, Wolfhunter is a hefty, challenging new DLC pack with solid and interesting quests, remarkable landscapes to explore and many enemies that will probably kill you. I had a fantastic time, even when I was dying, and I don’t say that often. While I’m currently too weak to explore the full extent of the dungeons, I’m more determined than ever to return to these dungeons later, with my sword held high.