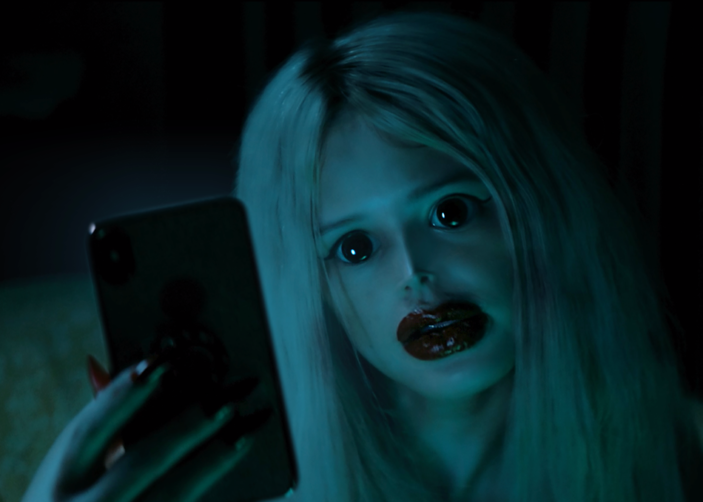 *The AU Review will continue with its planned SXSW 2020 coverage.  We have been in contact with the respective representatives for available films in order to give them the coverage they intended.

The Midnight Shorts Competition has long been an audience favourite at SXSW.  A bite-sized marathon of twisted ideas that usually fuses gore, overt sexuality, and dark humour together in manners perhaps too extreme for mainstream.  The 2020 program was no different.  Here’s five of this year’s Midnight Shorts that showcased just as much promise from their creators as they did horror from their subjects.

In a social media atmosphere where TikTok, Snapchat, and Instagram reign supreme, only one can truly dominate, and for teenager Sarah (Peyton Kennedy) it’s Selfie; disclaimer, the app doesn’t actually exist – and thank God considering where John Poliquin‘s twisted feature goes.  A not-so-subtle commentary on the state of aesthetic perfection in the age of social media, Sarah’s defiance in not wanting to subscribe to fake perfection comes at a price as her literal “perfect” persona manifests itself, resulting in a dark, brutal piece that suggests honesty online will save you from yourself.

Emily Wilson‘s sweet courtship tale of an online romance that transfers over into real-life would be prime rom-com material if it wasn’t for the shocking piece of luggage one of them brings to their planned weekend of hopeful romance.  With his awkward energy, Danny (Danny Dikel) appears to be the archetypal outcast that could derail the union, but Wilson’s chaotic dark comedy of errors flips expectations on its side, allowing Cleo (Remy Bennett) to emerge as the story’s most unhinged component.

Stacked with an impressive array of talent – Debra Messing, Colton Haynes, and Aisha Tyler, to name a few – though keeping the majority of them surprisingly hidden, Stucco is a striking debut from actress/director Janina Gavankar (The Way Back).  Utilising practical effects and a slow burn mentality, Gavankar’s agoraphobic protagonist starts to mentally unwind in her new surroundings that acts as a metaphor for her crippling desire to break through her phobia.  Unsettling imagery abounds in this unique thriller that tackles the themes of depression, guilt, and freedom.

A single setting, nasty special effects, and a duo of committed, central performances bookended by a 1980’s-inspired horror aesthetic, Laura Hasn’t Slept comes off like a new-wave Nightmare On Elm Street.  Australia’s own Caitlin Stasey and a suitably creepy Lew Temple play a type-of cat-and-mouse game of subconscious horror, something that writer/director Parker Finn delights in as he gleefully tortures Stasey’s Laura as she begs her therapist (or is he?) for help.

With practical effects courtesy of two-time Academy Award nominee Arjen Tuiten (Pan’s Labyrinth, Maleficent: Mistress of Evil) and endorsement from Knives Out director Rian Johnson, Seek already has the credentials most major productions would kill for.  A simple premise – two girls stopping at a roadside bathroom – and the basis of a family-friendly game (this one being hide & seek) prove horrific enough for creator Aaron Morgan to deliver 5 minutes of truly unnerving material that we would only be so lucky as to see expanded into feature length.