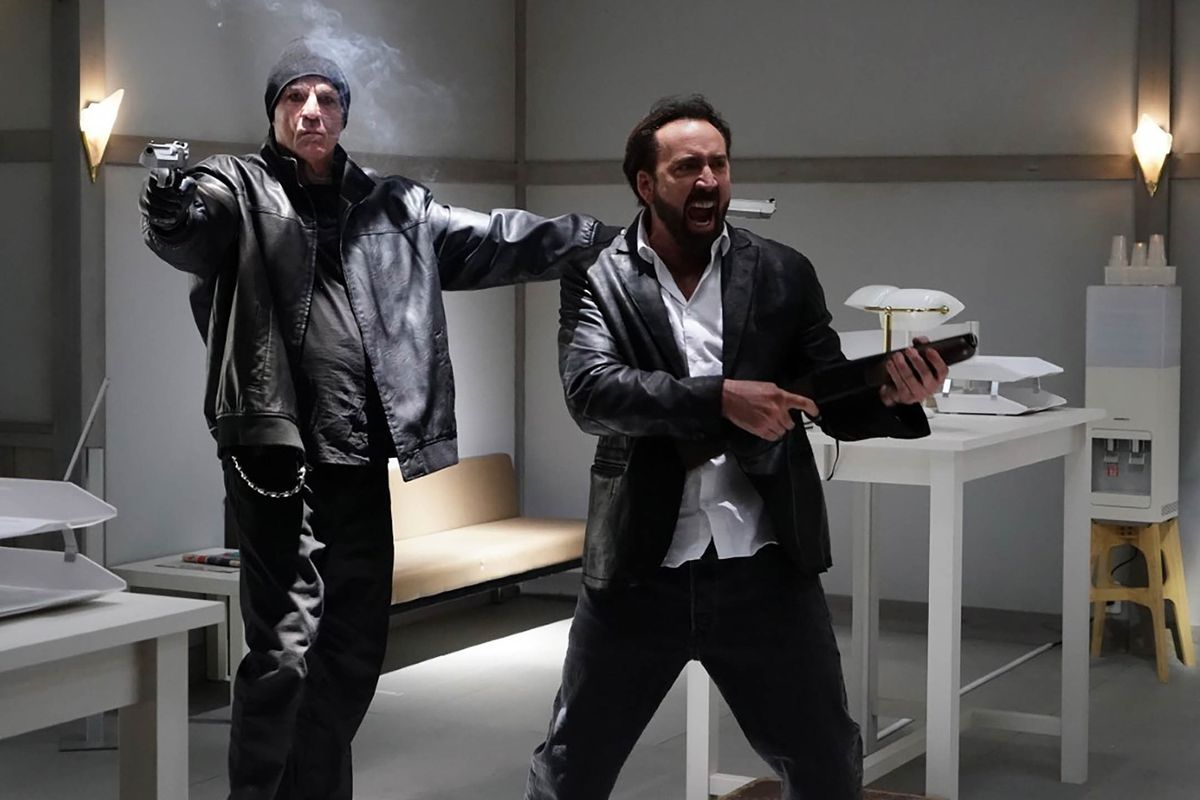 When one hears of a collaboration between acclaimed Japanese maverick filmmaker Sion Sono between American’s acting dynamo Nicolas Cage; one cannot help but be intrigued. Even people who dislike their work would love to see the final result of their work just to see what it would be like because the very idea of such a partnership is just so inexplicable to buy into. And now we have Prisoners of the Ghostland, a genre-mashup of both Japanese jidaigeki tropes and Western dystopian styles that promises to be unhinged in every filmmaking factor. Does the film live up to the hype?

The story is set in Samurai Town, which is essentially a mish-mash of Japanese aesthetic within a Western scope. It follows an unnamed mild-mannered(?) man (Nicolas Cage) who is reluctantly tasked by the governor of Samurai Town (Bill Moseley) to go and find his daughter Bernice (Sofia Boutella). So far, so simple. However, the man is a criminal who was caught making a bank robbery with his partner (Nick Cassavetes), and that comes with repercussions. So, should he ever think to escape or harm Bernice in any way, his actions will be taken into account thanks to a leather suit he will be wearing that is rigged with explosives.

The synopsis may be simple in story but it shall remain brief in order to avoid spoilers and surprises. Suffice it to say that Prisoners of the Ghostland is as unhinged as Cage fans would hope. As for Sono fans, it is a bit lighter on the idiosyncratic scale but it is still miles away from the compromise that international filmmakers would undergo when working in America.

Speaking of working in America, Sono (and his screenwriters Reza Sixo Safai and Aaron Hendry) explore the culture clash of both American and Japanese styles in such a way that it becomes an incisive spoof on both sides. Numerous slogans on the betterment of America are shown throughout sets, the references to nuclear warfare are rampant, the tragic jidaigeki stories are lampooned via Yasujiro’s bodyguard character (played by action star Tak Sakaguchi) to the point that his switching allegiances are stretched to an amusing breaking point, the iconography of Westerns are lynched to a hilarious degree including the leather suit and the fact that Cage’s character refuses modes of transport.

The sets are spectacular to behold that recall the sets shown in Sono’s rap musical Tokyo Tribe; grungy, vast, massively detailed and brimming with replay value. The cinematography by Sohei Tanikawa is as DIY as it gets but the scrappy aesthetic fits the B-movie vibe of the picture while the score by Joseph Trapanese honours both cultures while adding its own cinematic touch. The storytelling may be all over the place in terms of tone but the energy from Sono’s direction bring an exhilarating quality that is missing in blockbusters these days.

It helps that the cast are able to keep up with the extravagant proceedings. Talents like Moseley, Boutella and Cassavetes have already done their own niche work over the years so a film like Prisoners of the Ghostland would feel right at home for them and they bring a lot of fun. For Sono fans, the presence of his frequent collaborators including Tak Sakaguchi, Young Dais, Tetsu Watanabe and even Cyborg Kaori would bring a smile to their faces.

Then there’s the man himself, Nicolas Cage. A standout actor who is never afraid to go beyond expressionistic, Cage’s acting style fits Sono’s direction like a glove as he plays a comedic bent of The Man with No Name (which is a version of the lead in Akira Kurosawa films like Yojimbo and Sanjuro), Mad Max and Ash from the Evil Dead films. He is absolutely game with whatever Sono comes up with (including grievous bodily harm that Cage turns into a pantomime shout) and it makes perfect sense that Sono would say that Cage was the easiest actor he has ever worked with.

Overall, Prisoners of the Ghostland is an absolute blast; a dystopian East-meets-West culture clash that had me howling in its oddball feel; complete with numerous idiosyncratic touches that awash the well-worn plot. I cannot wait for the next Sono/Cage collaboration.

Prisoners of the Ghostland has screened as part of this year’s Sundance Film Festival, which was presented virtually between January 28th and February 3rd, 2021.  For more information head to the official Sundance page.