Sundance Film Festival Review: Together Together amusingly explores the notion of a man’s desire to listen to his biological clock 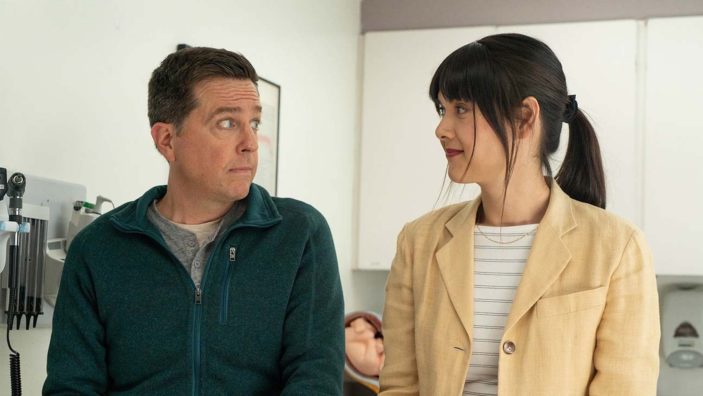 The notion of a biological clock and its exclusivity to women is a road travelled many a time over the course of cinematic history.  Such an idea pertaining to men however is another story entirely, and one that has seldom been explored.  Enter, Together Together.

Written and directed by Nicole Beckwith (returning to Sundance 6 years after her debut feature, Stockholm, Pennsylvania, screened), this quirky, imperfect but delightful-enough dramedy asks the question of what if an ageing, heterosexual male had the same urge to satisfy his paternal cravings?  Such is the dilemma for Matt (Ed Helms), a 45-year-old app developer who wants all the experiences that film and television have solely prescribed to women.

He’s awkward, but endearingly so – his app, titled “Loner”, speaks very much to his sensibilities – and he’s decided to make a go of it on his own, recruiting the 20-something Anna (transgender actress, comedian, and Big Mouth writer Patti Harrison) to be his surrogate.  After an amusing opening scene sets the tone for their at-odds personalities – her deadpan realism a stark contrast to his optimism – Together Together very much follows an archetypal narrative as the pregnancy navigates their relationship and allows them to have a more understanding perspective of the other.

As cringe-inducing as that sounds, Beckwith wisely manages to avoid anything overly saccharine, with Anna consistently keeping Matt’s ideals in check; he stresses over the psychological meanings behind certain colours he’s selected for the baby’s room, she narrows down the samples before smacking another baby book out of his hands; he tries to convince her of the genius of Woody Allen, she wisely debunks such a myth and highlights the problematic underlining of his obsession with younger women.  Whilst it’s all a little expected that such opposites would be thrust together, and Anna’s personality could run the risk of being similarly overdone in her cynicism, Helms and Harrison have such control of their characters that the film never feels in danger of losing its way.

In addition to the beautiful, organic nature of Helms and Harrison’s chemistry, Together Together delights with an array of side characters, many of whom are begging to be further developed beyond what they are afforded here however; Tig Nataro as their therapist is surprisingly under-utilised, Sufe Bradshaw (TV’s Veep) does so much with so little as a sarcastic, stiff-lipped ultrasound technician, and Julio Torres is a weird delight as Anna’s sexually fluid co-worker.  What’s not left for wanting though is the film’s insightful take on masculinity and the possibility of a platonic friendship between a man and a woman that doesn’t revolve around sex.  Although Matt and Anna discuss the weirdness of their age difference pertaining to the idea of a relationship, a lesser script would have shoehorned a romantic angle against all better judgement.  Together Together has the smarts to know better, something that proves remarkably intuitive for such a light film.

Whilst Beckwith’s take on a tested narrative may not quite break the glass ceiling, her tenderness and judgement-free look on the subject is to be commended.  It’s sweet without being schmaltzy, aided further by a likeable Helms and a scene-stealing Harrison who together break past the stereotypical formations of their characters, creating people we can invest in, even if the situation at hand is one not everyone can relate to.

Together Together is screening as part of this year’s Sundance Film Festival, which is being presented virtually between January 28th and February 3rd, 2021.  For more information head to the official Sundance page.