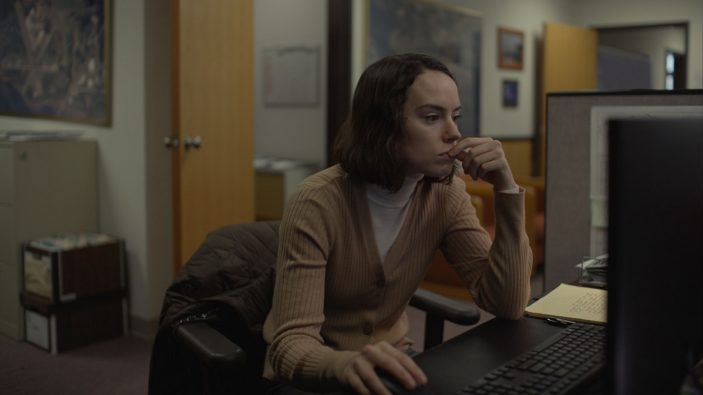 Whilst it isn’t always moving at a tolerable pace, nor does it necessarily answer the questions it raises throughout, Rachel Lambert‘s at-times dreamy dramedy Sometimes I Think About Dying still manages an emotional resonance as it tackles social anxiety and the feeling of disconnection that can stem from such.

Daisy Ridley – in a beautiful, subtle performance – is Fran, an office employee who watches the days go by from her office cubicle, seemingly disinterested in engaging in the harmless, mundane conversations of her co-workers.  A wallflower if ever there was one, Fran actually seems quite content in this singular existence, passing the time with envisions of herself dying – a crane lifting her up or her body vegetating in a lush forest the main imagery we experience – even if she isn’t so sure that it’s death itself she wants, more just the feeling of being taken away.

The swirling music that accompanies these fantasy sequences of Fran’s morbid imagination are a stark contrast to the monotone colour pallet that much of the film adheres to, and in the early stages of Sometimes… it’s one of the few additives that keeps it investing, as the first half has a lack of steam to its narrative.  When new office worker Robert (Dave Merheje) is introduced – replacing recently retired Carol (Marcia DeBonis, who has a pivotal scene towards the film’s backend that comes close to stealing the entire show) – the Kevin Armento, Stefanie Abel Horowitz, Katy Wright-Mead-penned script starts to touch on the thematics of human connection and what that can look like for someone as socially anxious as Fran.

It’s evident that Fran thinks she’s above having to interact in such a manner as the rest of her office does, but it’s in her removal from societal “normalities” that she has put herself at a distance, despite wanting a connection of her own.  It’s through her relationship with Robert that Fran starts to shift her way of interacting, but, thankfully, Lambert’s film never peddles the storyline that she’s changing herself specifically for a man, or that he’s a saviour of sorts.  Fran still very much guards herself and is afraid of letting someone know her truths, but there are the smallest glimpses of her enjoying Robert’s company, and when the film allows us their interactions there’s a certain joy, however awkwardly realistic, that’s present.

Undoubtedly a film that rewards the patience of its viewer – the final 10 minutes are quite gratifyingly tender – Sometimes I Think About Dying commits to its tedious pace (perhaps ironically so) in exploring loneliness and darkness without entirely traversing within Fran’s psyche.  However one personally relates or reacts to Lambert’s film though, the entire embodiment of Ridley’s performance can’t be denied; her hesitant body language and dry humour ensuring Fran is consistently engaging in spite of her own detachment.

Sometimes I Think About Dying is playing as part of this year’s Sundance Film Festival, taking place between January 19th and 29th, 2023, both in person and online.  For more information head to the official Sundance page.