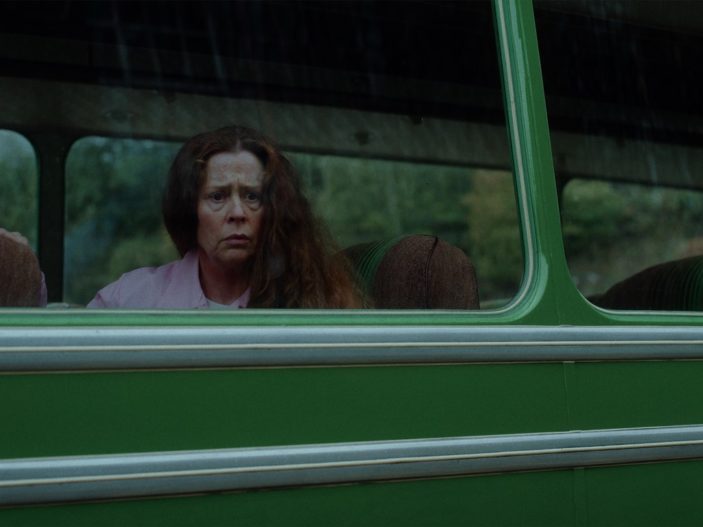 Kiddo, a short film written and directed by Brett Chapman, is an oddity, to say the least.

And that’s meant in the most complimentary of fashions, as the supremely bizarre, always unsettling outing announces itself as an original, individually interpreted horror film that’s likely to sit differently (and divisively) with its audience.

In fact, it’s because Chapman has left the film open to interpretation – though it’s difficult for it not to be related heavily to the environment and act as a commentary on the dwindling of our resources – that the narrative itself is difficult to critique.  What is likely to prove universal though is the filmmaker’s aesthetic and creative decisions throughout, with Kiddo submitting to a specific colour palette and sincere performance mentality in spite of its heightened horror temperament.

The title refers to its lead character – played with a beautiful childlike quality by Lisa Howard – a seemingly detached-from-reality ageing woman whose pink jumpsuit, dog collared neck, and general submissive nature suggests an existence that’s perhaps dominated by control and, possibly, abuse.  Already an unnerving enough portrait of a human, her sitting amongst a much younger crowd of people on a field trip-aimed bus only adds to the uncertainty that Chapman’s film adheres to, with the domineering Jasper at once a protector and master.

Where the film leads, what family business Jasper and Kiddo are attached to, and what violent inclinations the film opts to shock with are all best left discovered by viewers who appreciate their medium with a sense of off-kilter personality.  Kiddo is by no means an easy watch, but it’s difficult to not respect its bold, almost sadistic nature as it serves commentary and carnage in equal measure.

Kiddo is available to watch through Alter and their YouTube channel.