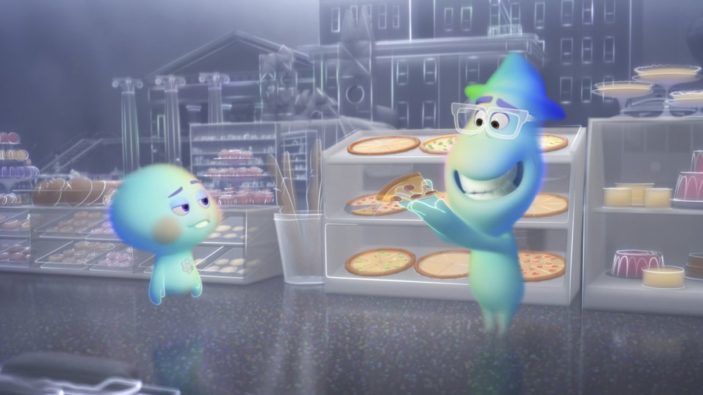 A far more meaningful film now given the climate of the world at hand, Soul is a deeply-felt, oft-hilarious, more experimental effort from Pixar that serves as a lovely ode to both life and death.  Whilst it absolutely deserves the cinema treatment it’s unfortunately being denied – the film will stream from December 25th on Disney+ –  one can understand why the studio big wigs opted for this route rather than preserve it for next year.  It’s a hard sell of a movie – much like Up and Inside Out, Soul tackles a heavy issue without downplaying the emotional severity for younger audiences – but it feels like it’ll garner that much more of a sensitive response when viewed at the tail-end of a year such as this.

Central to Soul is Joe (voiced by Jamie Foxx), a middle school music teacher with aspirations of making it as a professional musician.  Unable to overcome the niggling doubt from his mother (Phylicia Rashad), Joe’s never quite made good on his obvious talent, and having a stable career as a teacher isn’t enough for him to lay his dream to rest.  Experiencing one of those right-place-at-the-right-time moments, Joe runs into a former student, Curly (Questlove), who offers him the chance to play with one of his idols, jazz saxophonist Dorothea Williams (Angela Bassett).  Acing the audition and asked to return that night, Joe is understandably on cloud 9, so much so that he doesn’t notice the open manhole in his path, an opening that he falls down, only to awaken in what he gathers is the after-life.

Yes, within the opening moments of Soul, director/co-writer Pete Docter (Inside Out) addresses the reality of death and how randomly it can strike.  Joe’s awakening in the after-life, here known as The Great Beyond, is naturally met with confusion and he does all he can to make the most sense of his surroundings whilst avoiding the inevitable; his placement on an illuminated conveyor belt of sorts represents the pathway to oblivion, a metaphysical void that the surrounding souls all happily surrender to.

Plunging into another realm of existence, this one called The Great Before, Joe comes to realise he’s in a state of creation, a place where souls earn their attributes to what will ultimately shape them for when they leap into a portal that will assign them a new body to inhabit on Earth.  This is deep stuff, and though the explanatory dialogue isn’t softened for younger audiences, the delightful use of computer generated effects and 2D animated renderings alleviate the narrative, likely to serve as a starting point for potentially informative communication between parents and their children.

Unwilling to accept his own personal end, Joe manages to trick the powers-that-be of The Great Before that he is an assigned mentor, an authoritative figure who will help certain souls find their true calling.  Under the impression he’s a famous doctor, The Great Before partner him with 22 (Tina Fey), a soul who has long been an irksome presence due to her dim view on life; as we learn, 22 has been assigned such mentors as Marie Antoinette and Abraham Lincoln in her time who have all tried and failed to motivate her.  22 not wanting to find a purpose for Earth and Joe wanting to return to his currently lifeless body means a deal is easily struck between the two, one that naturally will propel life-altering changes for the both of them.

A film of three distinct acts, Soul will genuinely surprise as to where it travels, and regardless of how much of the story you think you’ve seen from the film’s trailers, I can guarantee there’s so much more to be experienced, and certainly not something I intend on divulging.  The film’s emotional aspect is obvious – don’t be surprised if it does elicit a tear or two from you – but the sheer broadness of Docter’s evidently warped sense of humour means Soul is, at times, immensely funny.  Foxx and Fey share a genuine chemistry through their vocal work (she is easily the funnier of the two) and the unique casting of such proven comedians as Graham Norton, Richard Ayoade, and New Zealand talent Rachel House (Paula the welfare worker from Hunt for the Wilderpeople, for those uninitiated) as the various soul counsellors of The Great Before further its specific comedic personality.

An absolutely stunning film to visually behold – the photorealistic imagery of the real world narrative juxtaposed with the innovational renderings of the “unreality” of the Great Before is truly beautiful – Soul‘s formulation may be heavy-handed, but it’s obvious that Docter has very much thought of this film with children in mind, seemingly creating it as such so that conversations are born from what’s put forward.  Life-affirming, full of joy, and unafraid to address the reality of death, Soul is a near-perfect present that we should all feel so lucky to be able to unwrap together this Christmas season.

Soul is available to stream on Disney+ from December 25th, 2020.