Review: HBO’s new film Bad Education is “the most Australian movie about Long Island ever made” 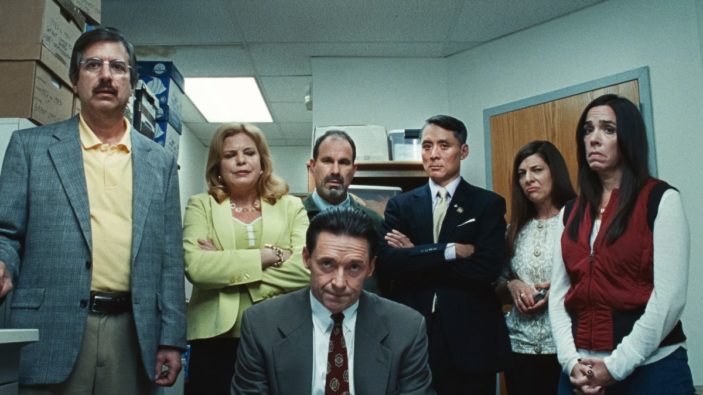 The newest feature film for us to enjoy from the company of our own homes during isolation is one that was never acquired for big screen distribution.

Coming from HBO Films (following the largest acquisition deal of the 2019 Toronto International Film Festival), Bad Education is the dramatised telling of a true story of corruption in a Long Island high school in 2002; the first scripted production from HBO Films since last July’s Share.

Director Cory Finley does a fine job of setting the tone, and the subtle work of cinematographer Lyle Vincent ensures you are pulled into every scene. Mike Makowsky’s script is also solid. But the film is one, like many of the shows we enjoy on HBO, that lives or dies entirely on the strength of its cast. Thankfully, with Bad Education, the cast have truly knocked it out of the park.

Hugh Jackman and Allison Janney steal the show, as superintendent Frank Tassone and assistant superintendent Pam Gluckin, respectively. Their nuanced performances add a weight to the film that makes it impossible to look away.

Young Australian actress Geraldine Viswanathan (Blockers, Miracle Workers), continues to show why she’s become one of the most in demand actresses in Hollywood, delivering a wonderful performance as a writer for the student paper that finds herself uncovering the actions that lay at the heart of the story. It says a lot that she was the character I wanted to know the most about after watching the film.

For a film set in Long Island, the irony wasn’t lost on the film’s director of casting two Australians in lead roles, calling the film “the most Australian movie about Long Island ever made.”

Incredibly compelling, it’s best to go in without knowing anything about the story – I deliberately didn’t delve into the “corruption” that lays at the core of the story in this article, and recommend you don’t either. It will help ensure director Finley’s crime thriller tone, which he did so well in his incredibly underrated 2017 debut Thoroughbreds, carries across.

I was on the edge of my seat for a lot of the film, a credit to the script and the often epic score from Michael Abels, who knows a thing or too about keeping audiences in suspense. He delivered us the scores for Jordan Peele’s Get Out and Us.

In Australia, Bad Education will be available to stream or watch from Sunday 17th May at 8.30pm on FOX SHOWCASE (Channel 115) on Foxtel. In the US, it’s already available on demand on HBO.