Melbourne International Film Festival Review: The Disappearance of Eleanor Rigby: ‘Him’ and ‘Her’ (USA, 2014) 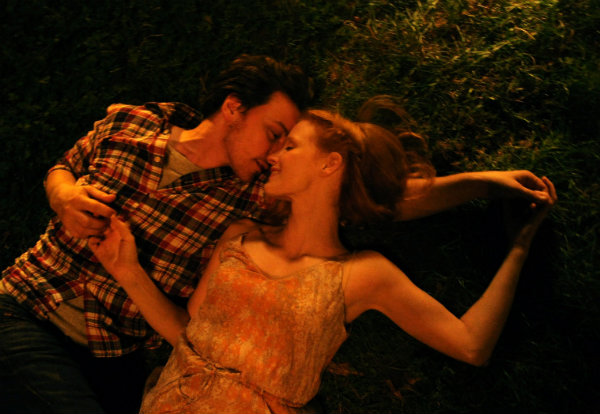 The Disappearance of Eleanor Rigby is the ambitious vision of writer/director Ned Benson to capture a relationship in breakdown.

Shot over three films ‘Her’, ‘Him’ and ‘Them’, (the first two screened back to back at this year’s MIFF, the second released later this year), Benson covers all angles of the crisis. In ‘Her’, Eleanor (Jessica Chastain) returns to her parents home in the aftermath of a tragedy, while in ‘Him’, Connor (James McAvoy) tries to get her back while also trying to save his bar from going bust.

Having a series of films covering the same story is an inspired idea, and Benson uses this conceit to recreate scenes that differ both subtly and drastically in each telling. It speaks to the very idea of memory and perspective that two people should conceive of of any given moment in such radically different ways, and makes for a very cool film device for channeling their inner worlds.

The only problem is with this being a formally very cool film, with a very clever device and some satisfying ‘a-ha’ moments when we realise what that character meant when they said that in the last film, is that this device is doing most of the film’s heavy lifting. A very wooden script gets some easy laughs with banter between characters, but all the serious stuff is delivered in porcelain-coated cliché (“There’s only one heart in the body. Please have mercy on me”) and the whole thing can’t really hang together based on the device alone. And though this sleuthing to pice the films together is actually very satisfying, almost all the narrative drama is drawn from the tragic events leading up to their breakup, the mere mention of which would be enough tension for anyone not made of stone. But without good storytelling technique, the drama soon dissipates, and the tragedy feels a little awkward and contrived, wrung of all possible pathos.

Possibly the only scene that manages to hold the tension of the relationships depicted without making us feel manipulated, is an off-hand story told by Eleanor’s father that speaks to the panic of loving a child.

But it’s not enough, and in the end it’s such a shame that an ambitious project – such a good idea, such an opportunity to study relationships, especially in trauma – fell short of its potential.

The Disappearance of Eleanor Rigby: ‘Him’ and ‘Her’ screened as part of the Melbourne International Film Festival.