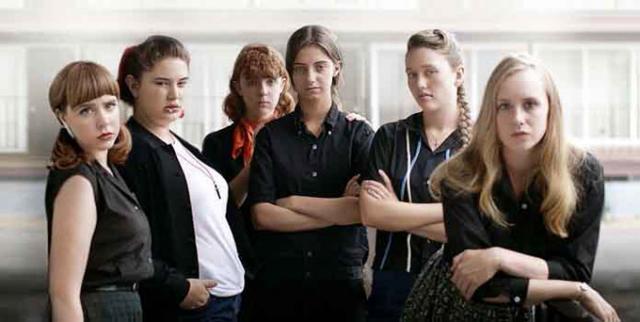 In 1950s upstate New York in the small fictional town of Hammond, a group of 15 year old girls band together under the weight of post-war culture which aims to crush them with its sexist, oppressive ideals. Mostly hailing from broken homes where abuse and violence are the norm, these spirited young women form a secret pro-feminist society, seeking retribution, whilst striving towards their own notion of freedom.

Unlike it’s 1996 predecessor, Director Laurent Cantet’s gritty adaption of Joyce Carol Oates novel Foxfire is truer to the story and period in which it’s set. The relationship between Madeleine ‘Maddy’ Wirst whom narrates throughout and Margaret ‘Legs’ Sadovsky the gang’s fiery, strong-willed leader is closely followed as the central thread to the storyline. Foxfire’s catalyst stems from the public humiliation of comrade Elizabeth ‘Rita’ O’Hagan during class by math teacher Mr Buttinger. Incensed by Rita’s mistreatment, the group deface Buttinger’s car, outing him as a pedophile and prompting his early retirement.

Drunk on a liberating sense of empowerment, the girls plot other acts of revenge, which start out as non-violent deeds of vandalism and larceny, that quickly descend into wild brutality. Prompted by leg’s ideals for a utopian society formed of their own rules and swelling in ranks, the girls leave home and take up residence in a ramshackle farmhouse a few miles out of town. Poverty drives them to use their wiles to lure, overwhelm and steal from older men, which whilst initially successful, further expose personality clashes and distrust amongst them. Leg’s attempts to resolve their money woes with one last major cash grab, brings the gang’s final blow .

Foxfire is shot with a teeth clenching intensity. Refreshingly lacking sugar coating, it does well to highlight situations that women were and still are, faced with. Audiences are pummelled with suggestions of gang rape and other types of sexual abuse early on, which can be hard to digest but are effective in their impact. Skilfully subtle moments expose themselves along the way, washing over without realisation and yet leaving the greatest impression, such as a scene where Maddy silently packs and leaves without any sort of reaction from her mother.

The cast is full of youthful unknowns and this is to the film’s credit, Raven Adamson who plays legs is an incredible talent, completely absorbing and vibrant in the lead role. Madeleine Bisson is exceptionally endearing and captivating as the sweet, insecure Rita and Katie Coseni does a fantastic job portraying practical, slightly withdrawn Maddy. There’s great finesse in the depiction of the girls, not only in their adaptability and fearlessness, but also in their innocence and naivety, which only solidifies the fine line on which they perch between childhood and adulthood.

It seems that in Cantet’s eagerness to cover all aspects of the novel, he may have tried to cover too much ground, leaving the story flailing and disjointed in some areas. A little more work on editing the drawn out elements of the film could have resulted in something more concise and better paced. Cantet also attempts to tackle multiple themes, only lightly touching on racism and homosexuality, leaving them as more of an afterthought.

However, this does not retract from the fact that Foxfire is timeless in its focus on the issues at hand, and powerful in the delivery of its message.

Foxfire screened as part of the Melbourne International Film Festival for more information on the festival and its programme please visit: http://miff.com.au/