Mean Spirited is an enthusiastic horror-comedy that delights in the purposefully awkward: FrightFest Film Review 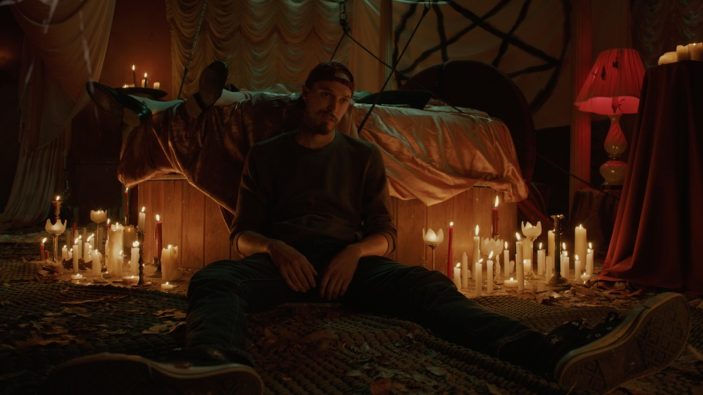 When watching Mean Spirited I couldn’t help but wonder why Jeff Ryan isn’t a household name.  As a director he has worked within a duo of spaces that have well been tested – the mockumentary comedy and the found footage subsect of horror – but both this and his previous effort (YouthMin) prove he has a flair for elevating them beyond their usual beats.  And as an actor he possesses a vanity-free mentality that feels necessary to successfully execute his brand of comedy, where he’s in on the joke and happy to let an audience laugh just as much at him as they will with him; it doesn’t hurt here either that his considerably ripped frame helps him lean into a leading man embodiment without all the attached baggage.

Basically, the man is a star, and everyone needs to catch up to him.

Though not the main attraction in Mean Spirited, he commands the sequences he’s in, perfectly nailing the douchebag-lined personality that comes with being an actor at the top of their game, which is what his character, Bryce, apparently is after headlining his own superhero franchise.  His sudden shift in fame and the lifestyle that entails – hence the aforementioned ripped physique – hasn’t sit too well with his hometown friends, specifically Andrew (Will Madden), aka wannabe vlogger “The Amazing Andy”.

His vlog, which coincidentally shares its name with the film’s title, focuses on the weird and wonderful of paranormal activity, and when Bryce invites Andrew and a slew of fellow hometown buds to his vacation home for a reunion of sorts, Andrew takes it as the perfect opportunity to create a “vlogumentary”, documenting his time with Bryce, whilst also hoping to secure some scares along the way.

Lucky for Andrew then that unexplained excrement does indeed hit the fan, with threatening notes, behavioural oddities and near-death occurrences all taking place over this supposed vacation.  He’s into it, but is it all an elaborate prank or is there something more sinister (and supernatural) at bay?  It’s not too hard to guess, really, but Ryan flexes his fun muscle as he plays with the tropes of the genre throughout, seemingly all too aware of when to exercise subtlety and when to let the throttle loose.

As is the case with most horror films it’s the final moments where the walls are hit with lunacy, and Mean Spirited doesn’t disappoint; though, if any viewers are hoping for big jump scares and buckets of gore, you best find your cheap thrills elsewhere as Ryan’s script – co-written with Joe Adams – opts for the terror behind possession rather than graphic pictorials.

Clearly enjoying the fun to be had with the archetype of the oft-annoying enthusiasm of the internet vlogger, as well as wrapping its horror around a cautionary tale of selling your soul for fame, Mean Spirited is a purposefully awkward comedic scarer that furthers Ryan’s hold as a filmmaker unafraid to put his ego aside for the sake of entertainment.

Mean Spirited had its world premiere at this year’s FrightFest, which ran from August 25th to 29th, 2022.