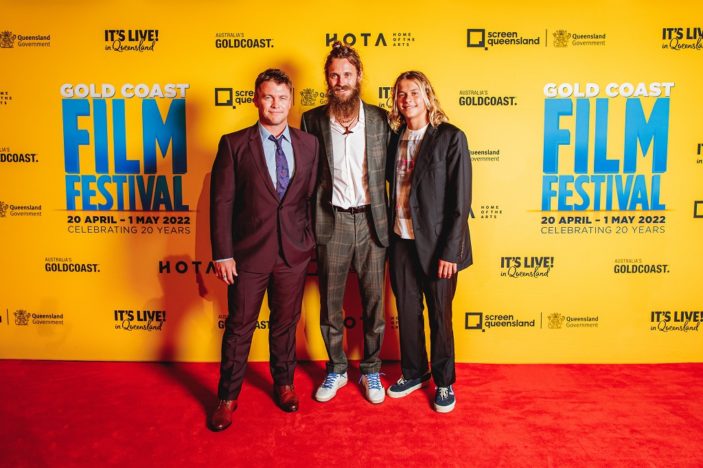 Bringing to a close 12 days of cinema celebration, the 20th annual Gold Coast Film Festival went out in suitable style with festival ambassador Lincoln Lewis, and actors Luke Hemsworth, Isabel Lucas, Rasmus King and director Tyler Atkins, there to celebrate the premiere of Bosch & Rockit, a soaring true story based on Atkins’ own childhood.

Our own Peter Gray was there to speak to the cast and crew about the filming conditions at Byron Bay during the pandemic, how it was for Tyler to dig into his own history when writing the script, and Rasmus on making his feature debut.

Rasmus, your background is in surfing, how did Bosch & Rockit come about for you?

Rasmus King:  It came pretty naturally.  I haven’t done any acting before this.  Tyler just hit me up (on Instagram), asking me if I wanted to play him (laughs)… he took a gamble on me.  It’s worked out awesome.

Did you feel any pressure in playing a variation of someone who is directing you at the same time?

Rasmus King:  Not really.  The character I’m playing, there’s a lot that I can relate to.  It was a great starting point for me.

I know you’ve just finished filming another project.  Is acting now what you want to explore?

I mean, you are at your own premiere right now.

And Luke, the original Hemsworth.

Luke Hemsworth: Definitely the eldest.  I didn’t get the height, but we won’t talk about that.

Was this one of your first COVID productions?

Luke Hemsworth: I think it was definitely one of the first in Australia, if not the greater part of the world.  It was definitely my first.  It was rough.  You never really get used to not seeing people’s faces.  Being on a film set it’s hard enough (as is) to remember everyone’s names when you can see their face, so you add the mask on and it becomes a bit of a problem, but, like any film set, it’s about solving problems.  You learn ways to deal with it.  We were lucky that we had such a great crew.  They were all from Byron, so they were all happy to be there.  No one else was (filming), so there was great camaraderie and this real feeling of “we’re in this together and whatever it’s going to take, we’ll get it done.”

There was a real sense of guerrilla filmmaking.  I look back now and feels like kind of a blur, but I don’t remember it being a huge problem.  I just remember things being weirder than normal, but learning to deal with it.

Tyler, congratulations on the film.  Given that this is your story, do you attack it with a type of warts-and-all mentality?  Go as far as you can and then scale it back as your writing?

Tyler Atkins: Yeah, it’s challenging.  Any script is going to be challenging.  The story was great.  I had it at 120 pages, and I obviously didn’t have the budget for that (laughs), so I had to take 30 pages out very rapidly.  I was writing this for 5 years, so I was savage with it.  I was kinda like “I don’t care” and I just started chopping and shaping.  What I figured is that it is really a father and son story, and it’s about forgiveness and the themes of forgiveness and parenting.  That’s what’s real to me.  I see so many kids grow up without parents, and alcohol and drugs within families, and we need to talk about it.

The way you grew up and I grew up are totally different, but we still have trauma about that,  The fact that we judge people or don’t forgive people, and we don’t know where they’ve come from.  That was really the theme.  So I could take stuff out that wasn’t really serving that.  I get everything on the page and then I trim back.

It feels like this film is coming out at the right time, given what people went through in 2020 and 2021.  I feel like there was a certain re-evaluation that people adopted…

Tyler Atkins:  Absolutely.  I got to be with my daughter and I looked at what kind of decisions was I making and how did that affect the world?  It has been a time to reflect and grow and look at what matters and what doesn’t.  I think that’s the beauty of coming out on this side.  We’re all going through shit.  It’s not easy to be human.  You can be all smoke and mirrors, but, you’re right, it’s a great time to just talk.

You’re essentially casting yourself in some ways with Rasmus King.  How was that experience?

Tyler Atkins: Yeah, yeah.  Rasmus was a given.  I was working with him for about 4 years before we shot, just screen testing.  When I first saw him…he’s just so beautiful.  So pure, so innocent.  He just had that childlike quality of pureness.  He was untainted.  I knew I had to capture that before he started going through puberty.  He’s as tall as me now (laughs), and he’s towering over Luke, so if I had shot it only 6 months later…I was lucky to just capture it.

I was so blessed, and to cast Luke…he brought a lot of knowledge, and we really challenged each other.  He jumped on only 2 weeks before we started shooting.  No prep.  And he and Rassy just had that father-son bond, and it was beautiful.  It was a beautiful experience.  We were one of the first films to shoot through COVID, so it was risky and hard, because no one knew anything about it.  We did everything right, but we couldn’t get insurance or completion bonds, but I saw crews out of work.  Everyone wanted to work.  So we created bubbles, and we did it. 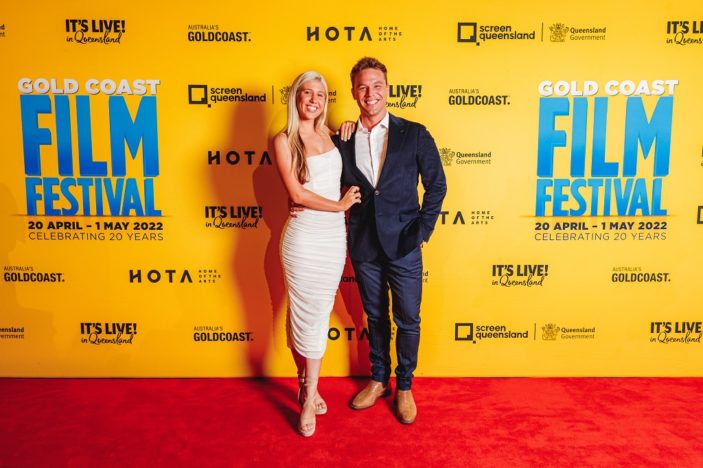 Lincoln, you’re here in an official capacity as the festival’s ambassador.  How did this come about for you?

Lincoln Lewis:  To be honest, they reached out and wanted to set up a meeting about being involved.  I just thought “Oh, does that mean I can get a ticket?” (laughs).  They then asked about wanting me to be an ambassador.  Being asked to be an ambassador was such a humbling thing.  One, because it means I’m on their mind, and two, it means they take you seriously as someone in the industry.  For me that was a real moment.  To be an ambassador of a film festival, let alone Queensland, my home state…it’s incredibly humbling.

What’s been your festival highlights so far?

Lincoln Lewis: So, How to Please a Woman on opening night, but The Drover’s Wife…Leah Purcell is something completely out of this world incredible!  It’s something that everyone in this country needs to see.  The way she told that story.  And she’s writing, producing, directing…all those things together, she’s a wonder woman.

Do you think this will be a position for you that could continue?

Lincoln Lewis:  Well, we’ve had a chat and they’ve said how they’d like to use me for the next couple of years.  And that’s amazing! That would be epic.  It could be ongoing, so it’s a real honour.

Bosch & Rockit is scheduled for a national release in Australian theatres from August 18th, 2022.