The worldwide phenomenon and modern cult-classic Stranger Things has finally teased its return, and OH MY GOD are we excited.

Netflix has just released a mysterious teaser video on Twitter, as well as a brand new poster with the release date. 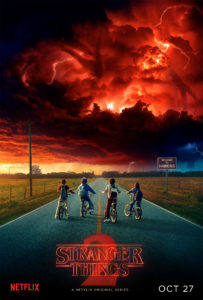 The creature pictured is another look at what we saw in the teaser for the Superbowl in February, sparking debate as to what could it be. Is it the ruler of the Upside Down? Another government experiment gone wrong?

It’s 1984 and the citizens of Hawkins, Indiana are still reeling from the horrors of the Demogorgon and the secrets of Hawkins Lab. Will Byers has been rescued from the Upside Down but a bigger, sinister entity still threatens those who survived.

All episodes of Stranger Things: Season 2 are set to be released October 27, 2017, only on Netflix.