Interview: Zazie Beetz and Lilly Singh on voicing The Bad Guys; “Animation makes everything you do 100 times better” 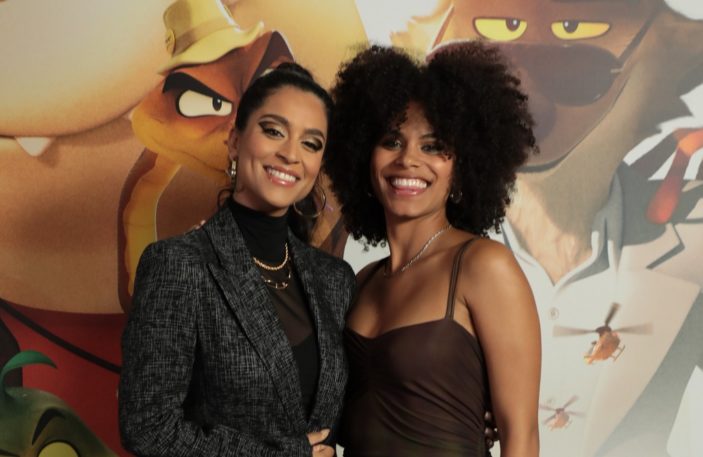 As The Bad Guys releases in Australian cinemas (you can read our review here), Peter Gray spoke with actresses Zazie Beetz and Lilly Singh about their voice work in the animated heist caper, how they reacted to first reading the “Tarantino for kids” script, and the “thrilling” experience of recording their roles in the same pair of sweatpants.

Animated films feel like a genre that is so integrated into everyone’s youth.  Before talking about The Bad Guys, are there animated films for the both of you that have stuck with you from childhood?

Lilly Singh:  I always really liked Toy Story. This is not from childhood, but Inside Out is probably the animated movie that has impacted me the most because it punched me in my feels repeatedly.  And I think just Aladdin, for me, because that was the closest I got to seeing myself. I told this to Zazie that I was Princess Jasmine for like nine years in a row for Halloween.

Zazie Beetz:  I really liked Monsters Inc. a lot. I actually think in some ways it’s sort of a little bit similar to The Bad Guys.  Not coming to judgement and that joy is perhaps a good path to (travel).  But yeah, in this moment that’s the one that’s hitting me.

As much as I was watching movies like Aladdin and The Lion King growing up, I was offsetting that with Jackie Brown and Out Of Sight. So how did you react when first receiving the script and seeing that this was catering to fans of that Tarantino and Soderbergh mould?

Zazie Beetz:  I think that was what was so enticing about this film, that it is blending genres together that don’t usually meet and, I guess, introducing children to the heist genre and action films.  I think that’s what is (so) stimulating.  And it’s dynamic and it’s fun.  It’s what makes this movie special.

Lilly Singh:  It’s so hard to do things that stand out and I think that’s what I loved about the script. I was like, “Oh, I think this film will actually set a trend of people doing things like this.”  It’s the first of its kind, truly, and I like projects that disrupt things like that, that break the mould.

Zazie Beetz:  That’s actually the big question.  I actually really like auditioning for stuff.  Because when I’m offered things, and I’m like, well, hopefully you like my version.  And I was offered the this role in this movie.  And, you know, Pierre, our director, we just talked about the character, and it took a couple of sessions to really find Diane (Foxington), hence the anxiety around like, “Oh, am I right for her or not?”, but then when we land we landed (it), and then we could play off of that.  But it took a moment to do that.  In general I think you audition for voiceover in the same way (you) audition for any script, any movie or theatre piece, where you just send in a tape of yourself reading the material, and then the producers and the directors decide if your energy is right for the piece.

Lilly Singh:  I have auditioned for (voice over) stuff before. I did not audition for this.  I got offered this role.  But I agree, I think the thing with animation is you can take it in so many different directions.  So the audition process is actually kind of…I actually have way more fun auditioning for voiceover stuff than otherwise, because I feel like the amount you can play (with) is just limitless.  That you can put on a voice, you can be just yourself or you can be so exaggerated.  I really do like auditioning for voiceover.  Having said that, I wasn’t mad when I got offered this.

Because it’s just your voice, do you find that a vulnerable process or incredibly freeing?

Zazie Beetz:  Because it’s not your full image, because it’s not everything being put out into the world, I find you have so much to hide behind.  When I watched the movie I see all these characterizations they added to Diana.  I didn’t do it. You know, they’re shaping so much of the character as well and the voice, you just have so much more time to just play and throw it out there. And then they pick the best one.  I think it’s quite freeing.

Lilly Singh:  Totally agree. I think I’m my most creative during voiceover work.  And I agree (that) animation makes everything you do 100 times better.  Literally, it’s the best job in the world, because we’ll go into the booth, we’ll do the thing. And the animators will be like, “All right, now we’ll make this amazing.”

Zazie Beetz:  Yeah, you don’t have hundreds of people watching you, right? And then you walk off set, and then they’re like, (sarcastically) “Oh, good take.”  There’s none of that. 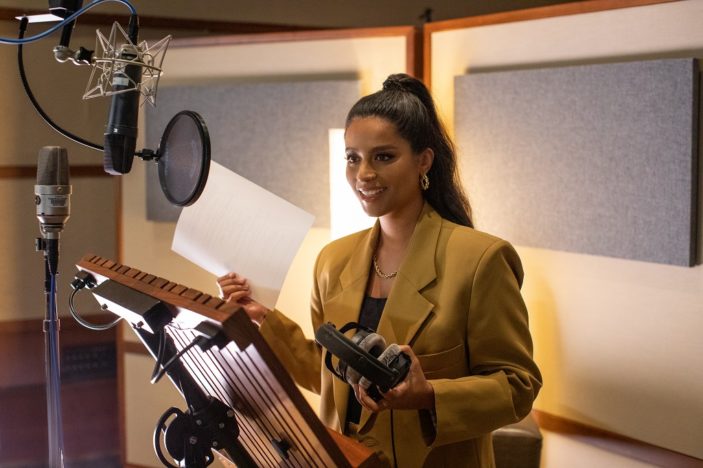 You hear that animators add in physical attributes and quirks that the actors do themselves. So when you watched it did you see in your characters, Tiffany and Diane, anything that was actually you? You thought to yourself “I sort of wink like that”, or “I smile like that.”?

Lilly Singh:  Honestly, kind of my facial expressions.  Also when I posted the character, all the comments from my fan base were “This is so you. This looks like you. She acts like you.”  So I definitely think her over-the-top-facial expressions and how much she uses her hands are definitely like me.

Zazie Beetz: I think that too. In general they take from you your performance (as your recording).  And I think they often copy that in order to make it more realistic.

You’re obviously interacting throughout this press tour, but recording the film, I imagine, was probably quite a remote experience during the pandemic.  How did you find that experience? Any makeshift studios at home?

Lilly Singh:  Well, I actually have a sound booth at my house.  So I recorded a lot of this in my quarantine outfit, which was the same sweatpants and T-shirt. So I feel like for all 10-12 sessions, I wore the same clothes.  And I’m thrilled about that.  I am extremely thrilled about that. I have no regrets.

Zazie Beetz:  I hope we get some behind-the-scenes footage of that…

Zazie Beetz:  I did crawl into my closet at one point and recorded some stuff there. It was a mix. I was sort of travelling a lot at the time for work. And was in a room in my house and then various studios in different places. And then in my closet, so it’s sort of a mix and match.

And did you get to meet Aaron Blabey over Zoom?

Lilly Singh: We actually just both met him.

Lilly Singh:  And I can imagine this is quite the surreal, awesome experience to see his work coming to life like this.

I was going to ask if you learnt any Aussie terms? But if you only just met him an hour ago…

Lilly Singh:  The only Aussie term I know is Tim Tam.  You know that one?

Zazie Beetz:  They do love a Tim Tam.

Have you had a Tim Tam?

Lilly Singh: I have.  They’re great.  Vegemite? Don’t get that one as much.

Zazie Beetz:  I’ve never had Vegemite.  Can’t speak on that one.  What else? Lamington cake?

Lilly Singh:  What is that?

It’s like a Twinkie covered in coconut and chocolate.

Lilly Singh:  That sounds amazing! I love that you asked about Aussie slang and we’re like “Food?” (laughs)

You’re both incredibly hardworking women.  We love seeing women dominating the industry, and Lilly you especially have your hand in multiple facets – film, TV, music literature.  Anything else you want to conquer?

Lilly Singh:  I have a problem. I talked to my therapist about this often but no, I have a new book coming up on April 5, which is very exciting…

Zazie Beetz:  And what’s it called?

Lilly Singh:  It’s called “Be A Triangle”, thanks for asking (laughs).  I was just telling Zazie, actually, everything I’ve done in my life this book has helped me more than any other project I’ve ever done.  So I really believe in it.  I like to be creative in different avenues.

And now that you’ve seen the film, what was your reaction?

Zazie Beetz:  Honestly, just laughter, like I was really laughing a lot.  And it was a copious amount of butt jokes (laughs), you know, always a win.  It’s very joyful and fun, and a very affirming film all around, like character and friendship and love.

Lilly Singh:  There’s a lot of pride.  To be honest, I was really proud to be part of a project that was different.  And that was really gonna set the tone for films to come.

Zazie Beetz:  And the animation, it’s just so unique and cool.  I want to celebrate all that hard work that our animators put into this.  (It’s) beautiful.

The Bad Guys is now screening in Australian theatres.