Interview: Will Smith and the cast and crew of King Richard; “It’s about family and making it joyful, even though it’s intense”

As King Richard arrives in Australian cinemas today (you can read our review here), Peter Gray was invited to attend a global press conference with select cast members, including recent Golden Globe winner Will Smith, Aunjanue Ellis, Demi Singleton, Saniyya Sidney, and Tony Goldwyn, as well as Venus and Serena Williams, to discuss the making of the film and how it was to tell such a unique and intimate story.

Venus and Serena, what emotions are you feeling seeing your family’s journey being told in a motion picture, with your father being played by none other than Will Smith?

Venus Williams:  I think it’s super emotional.  Every time I watch it my eyes just water.  It was amazing to see the atmosphere on set and how much Demi and Saniyya acted like Serena and I.  Even when the cameras weren’t rolling they would hold hands, it was so sweet.  I’m just proud of what everyone has accomplished.  It’s pretty surreal to be honest.

Serena Williams:  Honestly, no word describes it better than surreal.  To see these incredible actresses and everyone behind it tell our dad’s journey… it’s like “Oh wow, are we really something?” (laughs).  It was super surreal for me, and then to have Will play this role as my father and the way he embodied Richard Williams just took the film to a whole new level.  It’s so emotional, it’s well done… it’s just a brilliant piece of work.

Will, what was it about playing Richard Williams that really appealed to you?

Will Smith:  We were talking about this earlier.  There was an interview that Venus was doing when she was 13 or 14, and it’s a famous interview where Richard snaps at the reporter.  I saw that in real time, and the look on Venus’ face was an image that burned in my heart because that’s how I wanted my daughter to look when I showed up.  That interview really changed my parenting at that time.  That was 20-something years ago, and when the opportunity came up to be a part of this that was the first thing I remember.  I knew I wanted to be a father protecting a daughter like that to the world.

Talking about family in this movie, Aunjanue, your character in this movie is where the family really takes flight in this, where the heart of it lies.  The moment you take it to Richard and tell him he didn’t do this alone, it’s a moment you can tell audiences need.  Can you talk about the dynamic you brought to portraying Oracene?

Aunjanue Ellis:  Well, I want to say that I give a whole lot of credit to these filmmakers.  I’m very lucky to be a part of this.  They insisted that Miss Oracene would not be in the shadows.  We have these stories that so often have the heroic male figure, but to do something where we did not see that Oracene was a co-conspirator of this crazy dream would have been dishonest.  We worked on that and tried to give her the presence that she had, because that was the truth. 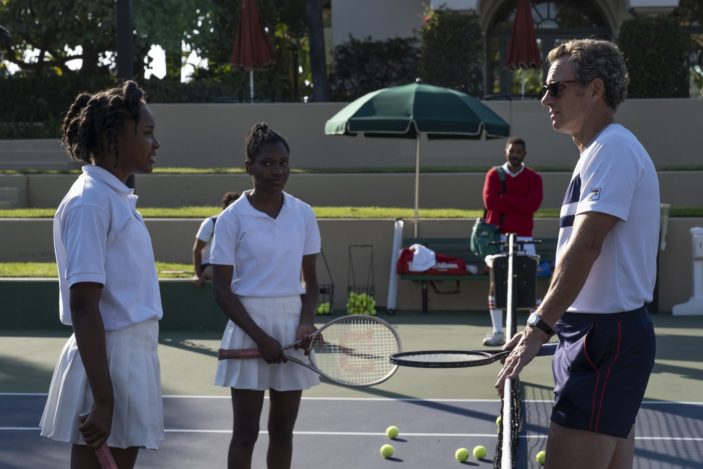 The other dynamic in the film is with you Saniyya and Demi.  You’re given the task of having to be Venus and Serena.  What were those conversations like for you in bringing about that authenticity as both players and as sisters?

Demi Singleton:  To make everything as real as possible, Saniyya and I just did a lot of research.  That was important to us to make sure everything we did was real.  This isn’t our story, it’s theirs.  The first time I got to speak to Serena was when she and Venus surprised us on set.  That was such a fun day.  When they spoke to us it was about everything except tennis, which was great.  We spoke about their life and childhood and the people they dated growing up (laughs)…

Serena Williams:  I wanted to make sure we were portrayed in the right way (laughs).

Saniyya Sidney:  I was quite nervous speaking to Venus for the first time.  Like Demi said we had such great conversations and they weren’t just about tennis.  I looked up to them since I was little, so it was very important for me to show just how big of a heart Venus has.  I get emotional every time because I had such an amazing experience on this film.  Getting to create this family, and not just with the cast but everyone behind the camera, they all just made us so comfortable.

Everyone here is playing someone real, and there’s a stronger dissection of the performance that comes with that. Tony, your character Paul Cohen wasn’t exactly on set to give you any pointers.  How did you go about portraying this man? I’m sure as a coach he was trying to give you pointers…

Tony Goldwyn:  Yeah (laughs).  It was really interesting.  One of the things in Zach’s (Baylin) script was that there’s a playfulness to Paul and Richard’s relationship even though there’s contention.  There’s mutual respect.  I reached out and found the real Paul Cohen and had long conversations about his relationship with Richard Williams and that family, but also how he went about coaching (Venus and Serena).  I just wasn’t sure.  It’s a pretty intense, high-octane thing.  It’s about family and making it joyful, even though it’s intense, (Paul) expressed immense admiration for Richard.  It validated what I read in Zach’s script.

Will, this isn’t the first time you’ve played a father on screen but this has to feel a little different? As an actor and a father taking on this role, you can’t help but maybe compare it to your own experiences.  What did you do when you made that calculus looking at Richard’s parenting style and comparing it to your journey through fatherhood?

Will Smith:  One of the first things that was interesting when I first sat down, Venus said “You know, it’s almost like they brainwashed us.  Our punishment was that we couldn’t play tennis.  It wasn’t the standard thing you see in a parent pushing a child”.  It was throwing fuel on a fire that they had, that was coming from inside Venus and Serena.  If I’m taking a role, I’m taking it to explore something, to learn something, and that was a new parenting idea for me of aligning with your children versus directing your children.